A week or so ago, I noted that I’d obviously gotten under the skin of political pundit Jon Ralston by simply noting that Nevada’s unemployment figures went down the first five months of 2011 when everyone thought tax hikes approved in 2009 were going to expire at the end of June…and then went up during the three months after the Legislature renewed that $600 million worth of tax hikes for another two years.

But apparently our online petition Monday suggesting a change in collective bargaining rules for public employees – allowing taxpayers an opportunity to vote on agreements just like the union members do – really hit a raw nerve.

Here’s what Jon wrote Monday afternoon in his RalstonFlash blog: 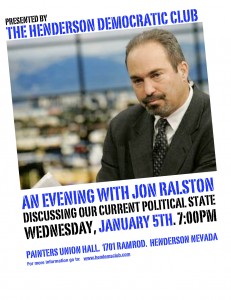 The far-right Republican front group misleadingly named “Citizen Outreach” is starting a petition drive/scam to exploit anger at public employee contracts to get voters to agree to popular votes on each one.

Anyone with a triple-digit IQ or anyone who cares about something other than attention-grabbing stunts – which disqualifies many of those in this group – understands this is not only infeasible, it is inherently unwise. Most real conservatives understand that a republic is founded on representative government and to slowly chip away at powers we invest in those we elect is much more insidious than any short-term wins. But these are not thoughtful people – and the reductio ad absurdum of such proposal is to start putting everything out to a vote that taxpayer money is spent on.

It is a ludicrous idea and I hope the real GOP leaders of the state – hello, Gov. Brian Sandoval – call out this nonsense before this snake oil goes on the market.

It’s the dumbest proposal since intimidating folks into signing a no-tax pledge. If these folks want something other than a republic, than say that. Or simply say: “We’re just doing this because we can and because we want to be somebody.”

1.) “Far-right” in Jon’s book apparently is anyone who believes, like the Founders, that government, taxes and spending should be small and strictly limited.

2.) As Jon knows full well, we’re a conservative organization, not a Republican organization. As for “front group” – for who/what? Nothing like an unsubstantiated accusation.

3.) What is “misleading” about an organization that reaches out to citizens and educates them about their government and public policy issues being called “Citizen Outreach”?

4.) How is posting an online letter urging the governor and legislators to consider taking action on a public policy issue and allowing citizens to add their name to that letter – without even asking for a donation to help fund the organization’s operations – a “scam”? Again, nothing like an unsubstantiated charge using loaded rhetoric.

5.) We’re not trying to “exploit” taxpayer anger over outrageous pay and benefits for government employees; we’re trying to channel that righteous indignation into meaningful, fair reform.

6.) “Anyone with a triple-digit IQ…” Right out of the Liberal 101 handbook; characterize conservative ideas or conservative candidates as dumb.

7.) “Attention-grabbing stunt.” Well, it’s not…and Jon saying it is doesn’t make it so. But even if it was, how would it be any different from all the attention-grabbing stunts regularly pulled by the government employee unions? Anyone remember all those “stunts” pulled on the capitol grounds in Carson City last session?

10.) While it is true that the federal and state governments are founded upon the principle of representative government, it is also true that the citizens of Nevada adopted a state Constitution which specifically states that “All political power is inherent in the people.” You could look it up.

11.) In addition, the citizens of Nevada also adopted Article 19 in its Constitution which allows for direct democracy via the referendum and initiative process. So no one is “chipping away” at the process; we, the people, are simply exercising our constitutional rights using the process that is already established.

12.) “…these are not thoughtful people…” Once again, straight out to the Liberal 101 handbook. If you don’t agree with conservatives, call them dumb.

13.) “…the reductio ad absurdum of such proposal is to start putting everything out to a vote that taxpayer money is spent on.” That’s, um, absurdum. Nobody is suggesting that. But when some 2/3 of the government’s budget is tied up in labor costs, employee contracts seem important enough to deserve much greater taxpayer scrutiny.

14.) It’s “ludicrous” apparently only because Jon doesn’t agree with it. And after all, why debate the merits of a proposal when you can just proclaim it “ludicrous” in the hope that no one will bother discussing it?

15.) “…the real GOP leaders…” Once again, how “ad absurdum” is it for Jon Ralston to be the arbiter of who the “real” GOP leaders are? I can tell you this much, an awful lot of REAL Republican leaders (not Republicans in name only) support this concept.

16.) Again, following the Liberal 101 handbook, Jon says this isn’t a serious public policy proposal, it’s “snake oil.” Why? Simply because Jon doesn’t agree with it and is mad at me, that’s why.

17.) “It’s the dumbest proposal…” Once again, if it’s conservative, the Liberal 101 handbook demands that you call it dumb….often.

18.) Ah, yes. Once again Jon’s obsession with the Tax Pledge rears its head. Why does Jon hate the Tax Pledge so much? Because it’s extremely effective in limiting the number of legislators who are willing to vote to raise taxes. That’s it. Unless Jon objects to ALL campaign promises made by candidates while running for office?

20.) And yes, we are “doing this” because our Constitution says we can and we believe it’s a way to correct an obvious problem and inequity. And we already are “somebody.” We’re citizens.

But the thing that really gets me about Jon’s rant over this is that he apparently doesn’t realize that this “far right,” “infeasible,” “dumb,” “ludicrous,” “absurd, “attention grabbing stunt”/”snake oil” “scam” is already an option afforded to Nevada’s citizens in our Constitution.

Again, Article 19 allows for “any statute or resolution or any part thereof enacted by the legislature be submitted to a vote of the people.” As subdivisions of the state government, this would appear to apply to the counties and local governments, as well. And a vote by a government body approving a labor contract would most assuredly fall into the category of a resolution.

The problem here for the people/citizens/taxpayers is that the Constitution presently requires that “a number of registered voters of this state equal to 10 percent or more of the number of voters who voted at the last preceding general election” must sign a petition calling for a referendum of a collective bargaining agreement. This places an expensive, time-consuming burden on the citizens who will have to pay for these agreements which doesn’t apply to the union members who will enjoy the benefits.

So how about we further this debate along by considering one of the following:

A.) We deny union members the ability to vote on the agreements just as taxpayers are denied the ability to vote on them presently. Instead, all such collective bargaining agreements would only need to be approved by the elected representatives of the government and the elected representatives of the union. That sounds fair and reasonable.

Jon, how about we discuss this face to face, so to speak?