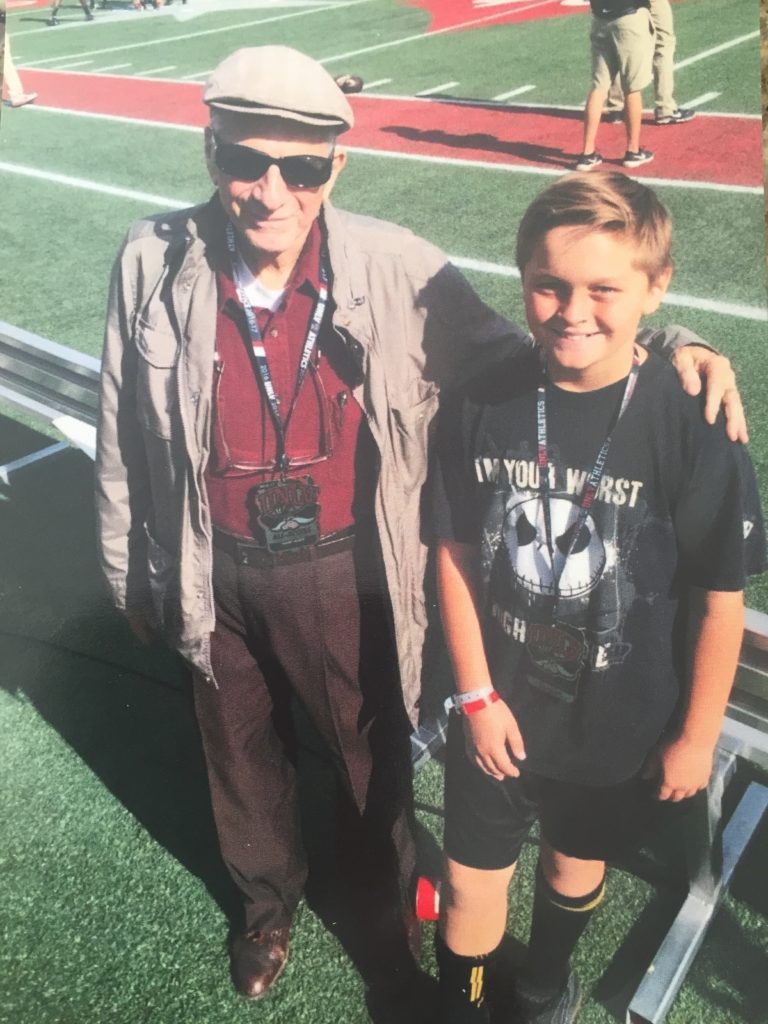 Uncle Mark and my son, CJ, at UNLV football game

Nevada University Regent Mark Alden passed away on January 17, 2019 after battling cancer for several years.  He was my friend and my daughter Jenna’s godfather.  And he’s missed.

I met Mark in 1994.  Was introduced to him by former Nevada Lt. Gov. Lonnie Hammargren at a Republican Men’s Club meeting at the old Hacienda Hotel on the south end of the Strip.  But Mark wasn’t a Republican at the time.

Although a solid fiscal conservative, he’d been a lifelong Democrat.  After I was elected Clark County Republican Party chairman in 1995, I tried to persuade him to switch parties.  He couldn’t, he explained, because his Italian mother would be aghast.

But a few years later he bit the bullet and made the change.  Funny thing, he told me that when he finally told his mom she replied, “What took you so long?  I switched years ago.”

Mark and I developed a closer relationship – and friendship – shortly thereafter when he volunteered to serve on an audit committee to review the party’s books.

Jenna was born in 2001.  Gia and I – who will be celebrating our 25th wedding anniversary this Thursday (condolences may be sent to her at giamuth@icloud.com) – asked our next-door neighbors, Mickey and Sandy, to be her godparents.

But they weren’t Catholic.  Which meant the church wouldn’t baptize her…unless at least one godparent was.  So we asked Mark, a devout Catholic, if he’d be Jenna’s official godfather at the baptism, with Sandy being the official godmother and Mickey being her “unofficial” godfather.

“Uncle Mark,” and his wife, Tunga, continued to be a close family friend over the years, often coming to the house for birthday parties, cookouts and holidays.

Mark was first elected to the University Board of Regents in 1995.  He went on to serve on the board for 17 years.  He loved it.  It was his passion.

“Mark was a selfless advocate for the Nevada System of Higher Education, its eight institutions, and its students,” Regents Chairman Kevin Page said on his passing. “Mark always was there to help or offer advice or lend an ear as a friend. He was a tremendous leader.”

“In 2016, Regent Alden was awarded the Distinguished Nevadan Award, the most prestigious award conferred by the Board of Regents,” noted a statement by the board upon Mark’s death.

In his Las Vegas Review-Journal column this morning, Ron Kantowski referred to Mark as the board’s “sports regent” and shared the following story which nicely captures the very essence of the man…

“I’ll not soon forget the time in St. Louis when the Rebels were making their Sweet 16 run under Lon Kruger, and the sports regent tagged along with Las Vegas media on a late-night run to White Castle near the Edward Jones Dome after their stories were filed.

“We put him in the back seat of the rental car.  In the middle.  We called him by his surname, as if he were just one of the guys.  Which, I think in retrospect, is all Mark Alden ever wanted to be.”

While a proud Republican – and unabashed Trump supporter over the past couple of years – Mark was no rabid partisan.  He got along with everybody, regardless of party.

In fact, as Mark approached his final days with us as the cancer finally got the best of him, Democrat Gov. Steve Sisolak – who served with Mark on the board for a number of years – stopped by the Alden house to visit and pay his respects.  Class act.

A funeral mass will be held on Wednesday at 10:00 a.m. at St. Viator Catholic Church in Las Vegas.  Burial with military honors will be on Thursday at 9:20 a.m. at the Southern Nevada Veterans Memorial Cemetery in Boulder City.  The public is invited to join us.

Mark was a good friend, a good husband, a good regent and a good man.