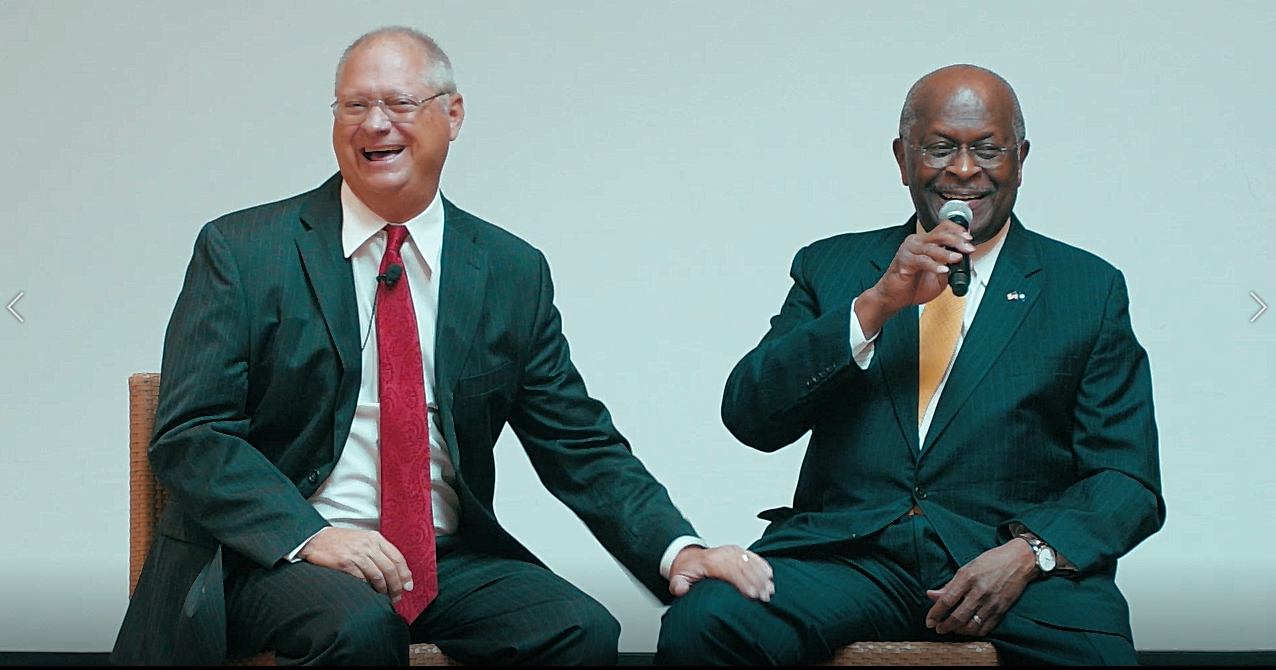 (Chuck Muth) – After 74 years gracing our Earth with his presence, Herman Cain, a giant in the conservative movement, left us today.

The man had a wicked sense of politically-incorrect humor, a belly laugh that was infectious and a beaming smile that could light up a small town during a solar eclipse.  A joyful soul.  A happy warrior.

I first met Herman in 2009 when he came out to Las Vegas as the keynote speaker for the first-ever Tea Party rally I hosted at Sunset Park.

It was an overcast day.  But as “The Hermanator” took the stage, the clouds parted, the sun came out, birds started to sing and angels descended from the heavens.

OK, that’s only a slight exaggeration.

Herman returned to Nevada often after that.  He loved Las Vegas, and particularly the Wynn – where he and I did an extensive sit-down interview in his suite during his presidential run in 2011.

He spoke at a number of our First Friday Happy Hours and Conservative Leadership Conferences over the years; never charged us a dime.

And for your viewing pleasure, here’s the video of Herman’s speech at Citizen Outreach’s 25th anniversary Conservative Leadership Conference at the Tropicana Hotel & Casino in Las Vegas in September 2017…

In our Q&A session after his remarks, we touched on a number of topics, including the budding PC movement to “change the names of statues and buildings.”

I asked: “Are we going to have to rename the ‘White’ House?”

After a brief pause, he deadpanned: “Not on my watch!”

Herman was a gifted orator who spellbound his audiences; mixing humor with his rock-solid conservative policy prescriptions.  Remember “9-9-9”?

I’ll never forget his speech at a Clark County GOP Lincoln Day dinner at the Venetian a few years ago.  Huge crowd of several hundred people.  And as he took the stage, many in the back continued talking to each other.

Herman just stood there alone behind the podium, without saying a word for what seemed like an eternity, patiently waiting until he had the attention of everyone in the room.

And then delivered a vintage barn-burner.  Never seen anything like it.

Herman loved America.  He was a true patriot.

And while Joe Biden claimed he “ain’t black” because of his support for President Trump…he was.

But the man refused to be defined by his skin color.  He refused to accept the notion that the United States was a “racist” nation.  And he rejected the idea that blacks can’t achieve the American dream.

Indeed, he was living proof they can.

And if you’re not familiar with Herman, his background and his views on dealing with race in his career, click here and watch this short “oral history of The American Black Conservative.”  Very powerful.

Herman was not only generous with his time, but made everyone he spoke with feel like they were the most important individual on the planet.  He was the quintessential “people person.”

Herman Cain was truly one-of-a-kind and is already sorely missed.

It was a privilege and honor to know this great man.  Give ‘em hell in heaven, Herman!

“My friend Herman Cain, a Powerful Voice of Freedom and all that is good, passed away this morning. Herman had an incredible career and was adored by everyone that ever met him, especially me. He was a very special man, an American Patriot, and great friend.” – President Donald Trump