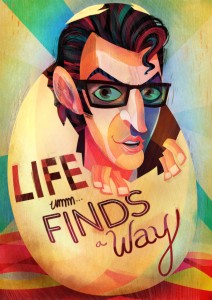 Sheldon Adelson’s $10 million donation to a super-PAC supporting Newt Gingrich has the do-gooder campaign regulators in a froth. Some are suggesting new legislation to ban super-PACs that would withstand court scrutiny. But that’s a fool’s errand.

If you ban super-PACs you’re NOT going to stop wealthy individuals and large employers – who have a lot to protect from the government – from getting involved monetarily in political campaigns.

So who are we kidding here?

In the movie Jurassic Park, actor Jeff Goldblum had this to say about the theme park’s plan to only clone female dinosaurs so they couldn’t breed: “If there is one thing the history of evolution has taught us it’s that life will not be contained. Life breaks free… Life finds a way.” The same could be said for money in politics.

Therefore, the best solution is to remove all caps on political donations, allow individuals and corporations and unions to give unlimited amounts of money directly to the candidate’s campaign – thus allowing candidates to not only be in control of their campaign and messaging again, but be 100% responsible for it, as well – and simply require full disclosure of the all donations online within 48 hours. Then let the voters decide if the money means anything.

Granted, there are exceptions to any rule…but voters, generally, aren’t stupid.