Recall threat has Hambrick scared down to his skivvies!

A promise made should be a promise kept.

And Speaker-of-the-Weak John Hambrick, inebriated with his new power as Speaker of the Assembly and Water Boy for Gov. Brian “America’s Worst Governor” Sandoval’s (R&R-Advertising) Billion Dollar Tax Hike, has broken the promise he made to his constituents that he would “oppose and vote against any and all efforts to increase taxes.”

And as you know, Hambrick has NOT come out in opposition to Sandoval’s tax hike.  Indeed, he actually voiced support for it back in December before it was even officially announced!

In an interview on a little-watched public affairs TV show hosted by a liberal blogger  that has since been cancelled, Hambrick said, he would support Sandoval’s budget, “even the taxes, the revenue enhancements, I will support that.”

Of course, there are always “Doubting Thomases” out there for whom only seeing is believing.  So with today being the day an official recall effort aimed at Mr. Hambrick can lawfully begin, I thought I’d share with everyone a copy of the actual Pledge he made to his constituents, as well as to the rest of us Nevada taxpayers… 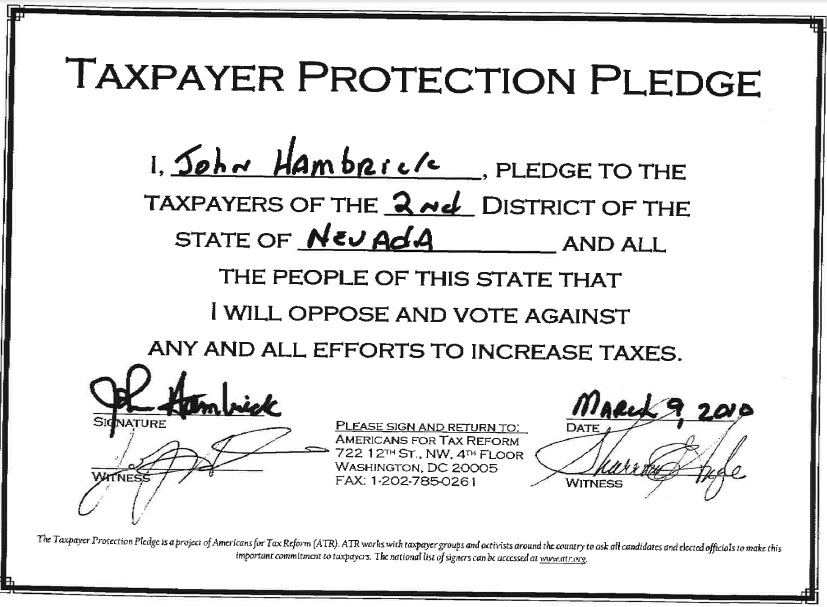 Oh, and get this…

The citizens planning on launching a recall against Speaker-of-the-Weak John Hambrick haven’t even filed their petition yet, but according to Las Vegas Review-Journal reporter Howard Stutz, a robo-call urging voters not to sign the petition went out Wednesday night.

“I got a robo home phone call last night on behalf of John Hambrick warning people not to sign ‘illegal’ Hambrick recall petitions and to call in to a certain telephone number to report where these ‘illegal’ activities are happening!”

Illegal?  What in the world are they talking about?  Did my subscriber just hear wrong?

Nope.  Another subscriber received and recorded the robo-call.  Here’s the exact text…

“This is an important voter alert.  It has come to our attention that petitioners are illegally circulating a petition to recall your state assemblyman.  Don’t be fooled by these illegal acts.  Refuse to sign and report it to us immediately on our voter hotline at (702) 664-8917.  This call was paid for and authorized by the Committee to Elect John Hambrick.”

That number goes to a recorded message at Hambrick’s campaign office.

Somebody’s scared. Scared down to their skivvies!

And what political dufus would send out a robo-call under Hambrick’s name telling people not to sign an “illegal” petition that hasn’t even been filed yet, let alone circulated?!!  My guess…

Make no mistake.  Successfully recalling any state legislator was always going to be a serious uphill climb, let alone the Assembly Speaker backed by all king’s horses and all the king’s men in Sandoval’s political operation.

But whether the recall actually succeeds or not, it’s clear just the THREAT of a recall has refocused every GOP legislator’s attention in Carson City.  They may pooh-pooh the recall’s chances, but they know even if a recall is ducked, there’s still a possible primary race to face in 2016 if they vote wrong.

The recall effort is as much about changing thinking as it is about changing assemblymen.  And clearly, in that regard, the Recall Hambrick effort has already succeeded before it’s even been launched.

In any event, you can make an online contribution to the Recall Hambrick effort by clicking here.  If you’re unable to contribute but would like to volunteer to help in the signature-gathering effort, click here.  Or you can contact committee director A.J. Maimbourg at (702) 366-9297 for additional information.