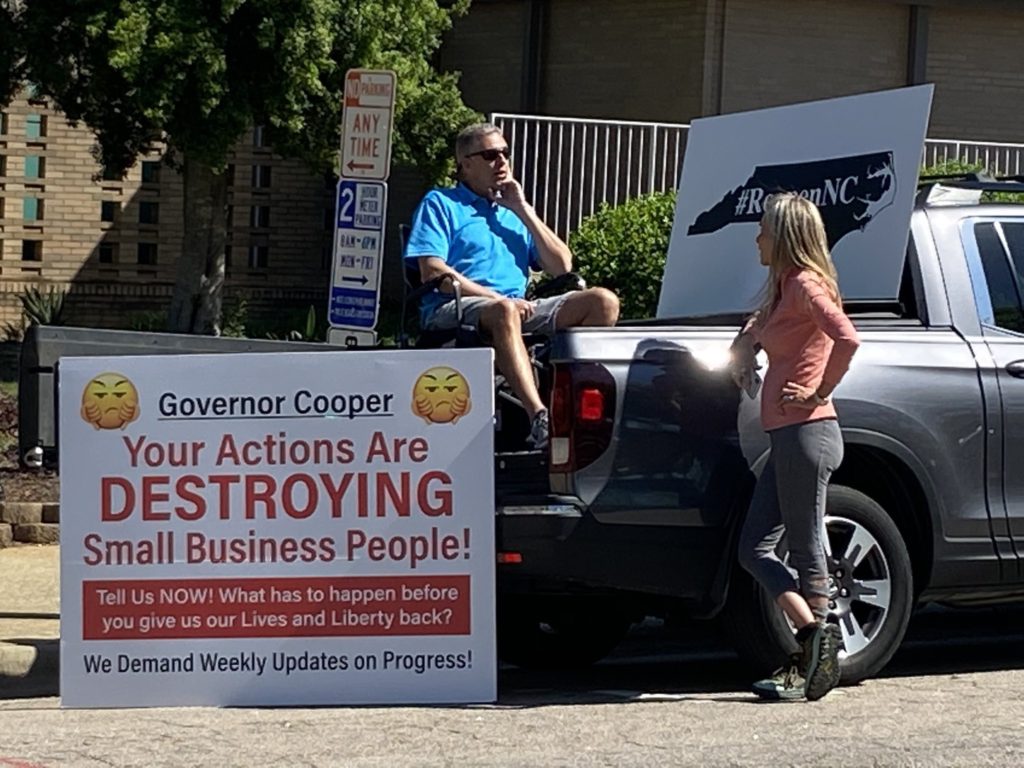 (Chuck Muth) – North Carolinians stupidly elected Democrat Roy Cooper to be their governor in 2016.  Coop won by all of 10,000 votes out of over 4.5 million votes cast.  But a win is a win, and now they have to deal with the consequences…just as Nevada is with Gov. Sisolak.

Here’s one of those consequences…

Cooper issued a mandatory stay-at-home order to deal with the Wuhan virus situation.

Some citizens, organized on social media under the hashtag “ReopenNC,” decided to peaceably assemble – exercising social distancing – outside the North Carolina Legislature in Raleigh today to protest the draconian measures Cooper has put in place.

And then the Raleigh Police Department came to the “rescue.”  And issued the following tweets…

Then some smarty-pants citizen had the temerity to ask…

“What part of the governor’s order was violated here?”

To which the Raleigh PD replied…

“Protesting is a non-essential activity.”

Now, if I have to explain why that response should send a chill down your spine, you shouldn’t even be reading this.

Protesting is as American as apple pie.  Constitutionally protected free speech.  Here, you can read for yourself…

“Congress shall make no law respecting an establishment of religion, or prohibiting the free exercise thereof; or abridging the freedom of speech, or of the press; or the right of the people peaceably to assemble, and to petition the government for a redress of grievances.”

There’s no escape clause that reads, “…unless the Chinese launch a biological attack on the country.”

And yes, for the constitutionally illiterate, the prohibition on Congress infringing on our God-given rights was extended to the states with the 14th Amendment:

“No state shall make or enforce any law which shall abridge the privileges or immunities of citizens of the United States.”

Look, I get it that the police department is acting under orders by the governor.  They don’t really have much choice.  In fact, I’m guessing many of them, personally, had no interest in breaking up the peaceful protest.

And I’m guessing most citizens recognize that, and are willing to cut them a little bit of slack.

But to declare on Twitter that “Protesting is a non-essential activity” was just stupid.

Thank goodness nothing like this could happen in Nevada.  Could it?

Anyone with an IQ over room temperature knows that reopening Nevada will be phased in.  And people will continue to generally observe social distancing and other precautions.

The curve has been flattened.  Risk of re-ignition minimal.  Time to start rebuilding our shattered economy from the ashes of the #SisolakShutdown.

* You hear about the latest insanity by Nevada Democrats?  They’re threatening to sue Secretary of State Barbara Cegavske unless she allows “ballot harvesting” and doesn’t do any signature matching on mail-in ballots for the June primary.  Click here to read all about it

* Scientists say sunlight and fresh air could be a helpful “mitigation strategy” for battling the Kung Flu.  So why has Gov. Sisolak closed all the parks?  I thought he was listening to the health experts?

* Kate Bedingfield, communications director for Sleepy Joe Biden, dismissed sexual assault claims by a former Biden staffer, saying: “What is clear about this claim: It is untrue.  This absolutely did not happen.”

Since she was 12 at the time of the alleged assault in 1993 and “clearly” wasn’t there, how can she make such a definitive declaration of innocence?

“(President Trump) has not behaved like a dictator.  It’s all talk.  Meanwhile governors across the country are actually acting like dictators, shredding the constitution, and turning their citizens into subjects.” – Matt Walsh

“Governors who keep their states shut down longer than is absolutely necessary will find their authority challenged in court – state constitutions also involved.” – Laura Ingraham