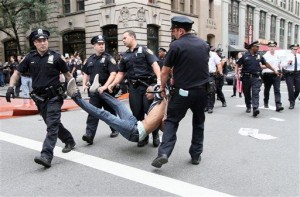 Well, I didn’t make it to the Occupy Wall Street or Occupy Las Vegas protests, but this week I did venture through the Occupy Inner Harbor in Baltimore and Occupy McPherson Square in Washington, DC. And I had to break out the ol’ Thesaurus to come up with all the appropriate words to describe the “massive” (had to be at least 3-4 dozen “occupiers” at each location!) contingent of protesters I witnessed at each venue. Let’s see…

On the other hand, God bless them. These folks are unwittingly doing more to help make Barack Obama a one-term president than…well, Barack Obama himself.

Heck, we already know Republicans and conservatives are united in their desire to defeat The Chosen One next year, but this rag-tag team of unhappy campers is helping cement in the minds of the all-important “independent” voters that having a Community Organizer-in-Chief ain’t gonna create jobs or prosperity.

I crossed paths with the “occupation” in Baltimore while taking my 11-year-old daughter and her 7-year-old cousin on a “Girls Day Out” to the Baltimore Aquarium. The first yahoo we encountered was holding a sign reading “My family is almost bankrupt.” I tried (no, really, I did) to hold my tongue, but I just couldn’t help myself.

“Um, maybe if you’d look for a job instead of standing here on a street corner holding up a stupid sign your family wouldn’t be facing bankruptcy.”

“I’m in construction. There are no jobs.”

“Um, how about bussing tables”

“Then I ain’t feeling sorry for you.”

It went downhill from there. So we just kept walking through Loserville – past the pony-tailed guy playing with his hula-hoop, the bongo guy, the rocket surgeon crayoning hand-made signs attacking corporate greed, and other assorted circus-like performers.

But those guys were pikers compared to their DC brethren.

Now, to be fair the DC crowd might have been uglier and smellier simply because the tent-city occupiers” were camping out on territory usually reserved for the capital’s homeless (formerly known as “bums” before PC ruled the roost) and the lure of free food – even though it appeared to be “organic” – helped make allies out of, well, natural allies.

Losers of a feather flock together.

Now, if it seems I’m being harsh, tough. Class warfare whining, belly-aching, kvetching, moaning and groaning about freebies and entitlements may be a God-given free speech right, but it’s not a trait most productive Americans choose to support. And if next November’s presidential election is a choice between these “occupiers” and the “tea partiers,” I’m liking our chances.