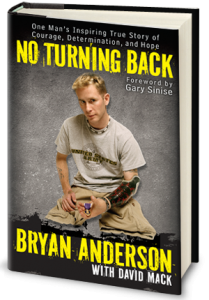 After a private cocktail reception Friday night with Virginia Attorney General Ken Cuccinelli – a leader in the legal fight against ObamaCare who will be running for governor next year – the host gave me an autographed copy of Bryan Anderson’s book, No Turning Back.

I read it cover-to-cover on the flight back to Vegas. Wow. What a story.

Synopsis: Bryan joined the Army in 2001, just before 9/11. He then served two tours of duty in Iraq. On October 23, 2005, the Humvee he was driving in an escort convoy was blown up by an IED. In the attack, Bryan lost both legs above the knee and his left arm.

But if you think this is a tragic story of a triple-amputee…boy, are you ever gonna be surprised.

This is a story of a human spirit that simply refuses to let life get him down. Bryan now walks, thanks to prosthetics…but that’s not all. He skateboards, snowboards, water-skis, rock-climbs and drives an ATV. He has appeared on the cover of Esquire magazine, as well as in some feature films and television.

If you think you’re life is in the crapper these days, do yourself a favor and get Bryan’s book. And when you’re finished, do a friend a favor and pass it on.