No Mask Warrior Goes All In, Announces Challenge to “Wet Noodle” Assemblyman 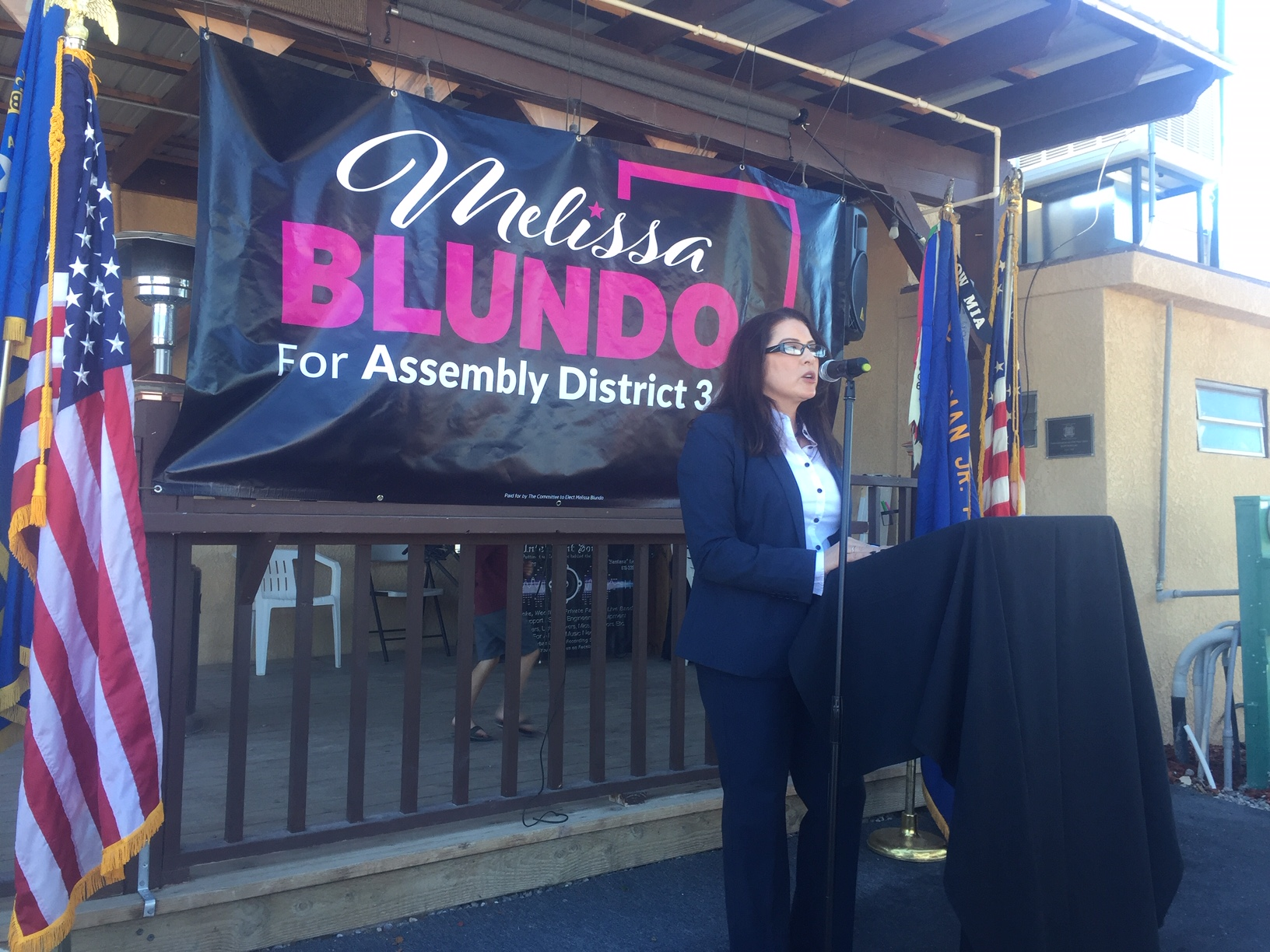 (Chuck Muth) – Conservative GOP firebrand Melissa Blundo – featured here in Muth’s Truths earlier this month – announced on Friday that she’s coming after wishy-washy incumbent Assemblyman Greg Hafen – who she referred to as a “wet noodle” – for the District 36 seat currently covering Nye County and parts of Clark and Lincoln counties.

Hafen, you may recall, was appointed to the seat after Assemblyman Dennis Hof passed away three weeks before Election Day in 2018 – which he nevertheless won in a landslide.

District 36 is overwhelmingly Republican and is likely to remain so after re-districting, probably sometime next month.  And unless Democrats gerrymander the district in such a way as to split Pahrump into two separate Assembly seats – highly unlikely – she’ll remain in Hafen’s district even after the new lines are drawn.

Blundo kicked off her campaign with an old-fashioned cook-out at the VFW hall in Pahrump, surrounded by well over 100 supporters.  She was introduced by Nevada Republican Party Chairman Michael McDonald.

Hafen kicked off his own re-election bid last week at a comparatively small, pinky-tilting wine-and-cheese soiree.

Blundo noted that her Italian restaurant in Pahrump was devasted after Nevada Emperor Steven von Sisolak issued his “emergency” order in March 2020 that shut down what His Excellency unilaterally decided were “non-essential” businesses and jobs.

“Then in June,” she said, “when the governor turned business owners and workers into ‘mask cops,’ I got really angry, especially because Assemblyman Hafen didn’t stand up and fight for us.  That’s why I decided to co-found the No Mask Nevada PAC.”

She went on to note that the PAC isn’t against people freely choosing to wear masks or getting vaccinated, but against the government mandating them. 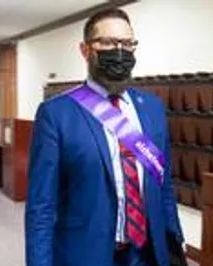 “Where was our current assemblyman when the Legislature, the people’s house, was shut down?  Was he raising hell fighting for us to be let in? No. No, he was not.

“Where was Assemblyman Hafen when masks and vaccine passports were being required to enter the legislative building?  He was wearing his mask and going along with all the governor’s mandates.

“There was no fighting for we, the people.  He went to Carson City and left our voices behind.  You deserve better.”

Blundo continued, noting that Nye County requested a bill to repeal the Commerce Tax, which Hafen failed to even talk about, let alone fight for during the session.  She went on to proclaim “No New Taxes” before signing the Taxpayer Protection Pledge and challenging Hafen to do the same.

Blundo then held up a copy of the official Nevada Republican Party Platform, promised the crowd she would support it, signed it, handed it to Chairman McDonald and again challenged Hafen to do the same.

Before wrapping up the event, Blundo’s campaign recorded testimonials of support from folks in the audience and “passed the hat” for kick-off contributions – which included a $10,000 check!

Adam Laxalt’s U.S Senate campaign is in full panic mode.  And an insulting fundraising email sent out on Friday blamed grassroots Republicans for its failure…

“We begged you,” the email stated.  “We pleaded with you. WE TOLD YOU that we were in deep trouble.  Now, we have terrible news, (name withheld).”

“We’re concerned, (name withheld),” the pitch continued.  “Democrats outraised us after you ignored this email. Our back is against the wall, (name withheld). Can you spare $5 for a GOP Majority?”

“If I fail to hit a fundraising goal again,” Laxalt concluded, “the Tax and Spend Democrats will WIN!”

Hmm.  Maybe there isn’t much enthusiasm for Mr. Laxalt’s candidacy among MAGA supporters on the ground after all.  And it’s hard to see how shaming $5 donors with such an offensive email is going to change that.

In a separate email on Friday, Laxalt wrote…

“(Name withheld), I just finished reading your response to our Biden Presidency Poll and… wow. I was blown away by how much this failed administration has affected you and your family.”

Problem: The person receiving this email never filled out the referenced poll!

Either the Laxalt campaign is misleading people with false claims or they have no idea what’s actually going on internally.  Not exactly running on all eight cylinders.

In a podcast interview with host Michelle Mortensen, Republican U.S. Senate candidate Sharelle Mendenhall, who just moved to Nevada in 2019, declared: “I’m going to raise every dollar that I need and I’m not going to raise more than I need.”

To which Mortensen then asked, “So how are you doing in the fundraising department?”

Mendenhall stumbled around the question a bit before repeating her assertion that she’s going to raise all the money needed.  Sorry, but…fat chance.

Both Adam Laxalt and Sam Brown – two of the other GOP candidates in this race – reported raising over $1 million each through the end of September.  How much did Menenhall raise?

Ms. Mendenhall – running for the first time – needs to face reality and look at running for a seat she would actually have a chance to win.  Lord knows we could use her in the Nevada Legislature!

BTW, you can catch all of Michelle’s podcasts by going to: www.michellemortensen.com/

* President Donald Trump nailed another political scalp to his wall yesterday after Rep. Adam “Never Trump” Kinzinger announced in a whiny video that he was quitting and not running for re-election next year – which he would have lost anyway.

Next up to go down: Rep. Liz “Never Trump” Cheney.

* The City of Las Vegas took another one in the shorts on Friday after District Court Judge Timothy Williams awarded the developer of the old Badlands Golf Course an eye-popping $34.1 million in damages (not including attorney fees) for “taking” the land from the developer without compensation.

But if you think that’s bad – and it is – that award was for only one of four similar cases over the same parcel.  By the time the other three are adjudicated, city taxpayers could easily be on the hook for over $100 million – which, by the way, it doesn’t have.

So grab your wallets!  It doesn’t take a crystal ball to know a massive tax hike is coming your way.

* Why wasn’t dazed-and-confused Nevada Gov. Steve Sisolak administered a sobriety test after he crashed his car head-on into an oncoming vehicle last weekend?

And why, as reported by Megan Barth of the Nevada Globe, was his wife, Kathy – who was not in the car at the time of the crash – so concerned with and allowed to remove “garbage” from the back seat of his Lexus before the investigation was concluded?

“Dr. Anthony Fauci’s division of the National Institutes of Health (NIH) funded an experiment at Kansas State University, involving hundreds of ticks feasting on puppies, which were injected with a mutant bacteria, alive.” – Breitbart News, 10/29/21

“We refuse to become the vaccination police for any government.” – Statement by In-and-Out Burger after another of its California stores was shut down for failing to force customers to provide a vaccine passport before being served