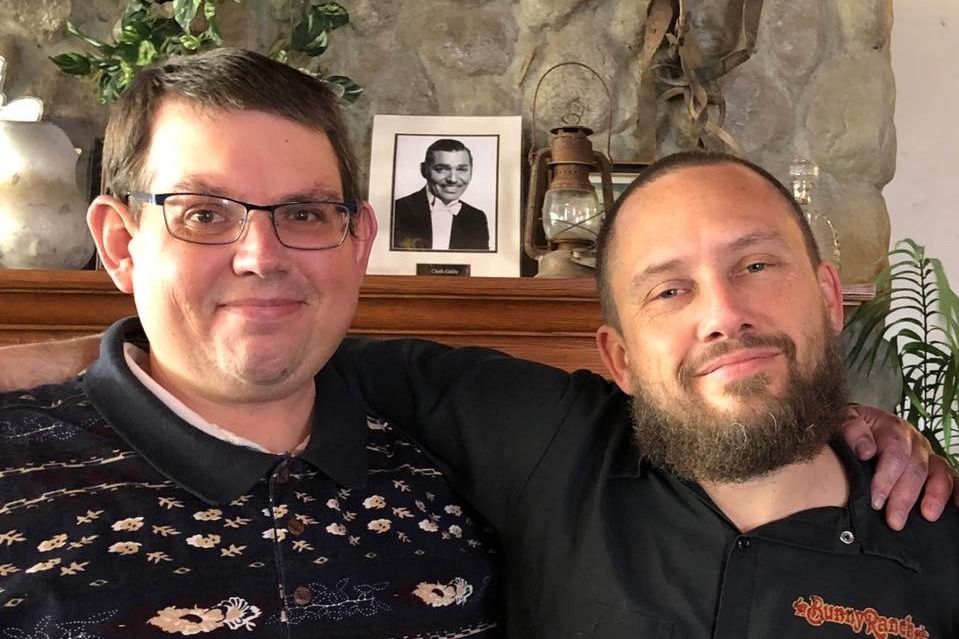 If you believe the misinformation, bordering on libel, and never-ending stigmatization put out by self-righteous moralists against Nevada’s legal brothels, you’d think brothel workers are pretty much the spawn of Satan; low-life degenerates deserving of nothing but public scorn and contempt.

I worked extensively with Phil during late Assemblyman Hof’s campaign for the Nevada Legislature last year – and a more amiable, down-to-earth guy you just won’t find.

Yet he was a fierce defender of the legal brothel industry last fall when an unscrupulous Reno lawyer conspired with a disgraced former sheriff to pass a ballot question that would have shut down his place of employment and put him out of work.

Fortunately, the voters of Lyon County crushed the initiative in November, 80-20 percent.  But back to our story…

Like everyone else working in Nevada’s legal brothels, Phil’s a real person with a real life totally unconnected to his job.

To start with, he’s married, has 5 kids and is very active in the community.  In fact, Phil is the founder of an organization called The Dayton Pigs – a group of citizen-volunteers who go out on weekends cleaning up trash dumped illegally in the desert.

“Couches, mattresses, televisions, tires and household garbage are the most frequently cleaned up items,” the Reno Gazette-Journal reported last summer.  “But the group has also found a pile of Smith’s grocery carts with all the metal removed, as well three dead goats – one cut up and placed in a plastic bag.”

But that’s nothing.  Get this: Phil’s now preparing to undergo potentially life-threatening surgery to remove one of his kidneys.

No, there’s nothing wrong with it whatsoever.  In fact, just the opposite.  It may prove to be PERFECT.  Here’s the 411…

You see, there’s this guy in Dayton named David Mickelsen.  And late last year, according to a story this week in the Nevada Appeal, David sent Phil a request through Facebook to join The Dayton Pigs – a request Phil says saved Phil’s life.

“61 days ago,” Phil wrote this week, “I smoked my very last cigarette. I couldn’t have done it without his (David’s) help. Every time I feel the urge to light one up, all I have to do is think about him…because if I smoke that cigarette, it will kill him.”

OK, as Paul Harvey used to say, now the rest of the story…

You see, David is already dying.

“Mickelson,” the Appeal reported, “who survived a childhood brain tumor, was diagnosed with kidney failure as a result of an autoimmune disorder shortly before moving to Nevada from the Bay area in 2014.  He’s been on dialysis since, but it only rids the body of about 10 to 15 percent of the toxins a kidney would do.”

And David’s been searching for YEARS – without success – to find a living donor who would keep him alive.  And time for him is running out.

“David has almost reached the end of the road with his kidney disease,” Phil wrote. “Due to medical confidentiality laws I cannot say too much about the specifics of his condition, but it’s safe to say he suffers every single day, and none of it is his fault.”

Phil had been following David’s plight on Facebook, “seeing him plead with the citizens of my town to help save him, and nobody answering.”

So Phil did what Phil does…he stepped up and took action.

He offered to give David one of his own kidneys.

“I contacted David on (Facebook) Messenger, and found out I was the right blood type. After filling out a couple applications, and speaking to a nurse from UC Davis on the phone, I was told I had to quit smoking for 30 days to be eligible.

“I quit smoking that day.

“A couple weeks ago, I finally met the future owner of my kidney. We did an interview for a local AM radio station. After listening to David’s stories of suffering, and witnessing the physical toll dialysis takes on a person, I was 2,000% ready to do this.

“All fear of my surgery faded away when I realized how tough this man has to be to just stay alive. Who am I to complain about a few weeks of discomfort?”

This, folks, is the very definition of “hero.”

“There are still more tests for me, but according to the labs, I’m a match. How weird is that? The only person in my town to step forward, and I’m a match?!

“Anyway, March 11 and 12 will be two days of X-rays, scans, needles, and psych evaluations. They have to make sure I can survive the surgery, and they give donors every possible chance to back out.

“I’m not worried about the tests. I know I’ll pass, because I have to. No other eligible donors have stepped up, and David’s almost out of time.”

All for a man who was a complete stranger just a few short weeks ago.

Despite all the advances of modern-day medicine, we’re not talking about removing a mole here.  We’re talking about major surgery to remove a vital organ from a man with a wife and five young children to give to a fellow human being who will likely die without it.

How many of us would do the same?

Phil told the Appeal that “his wife, Lisa, was somewhat reluctant at first but understands his motivation. He hopes his five children see him as an example.”

It’s an honor to know Phil and a blessing to have him living in our state.

Yet as I write this, there’s a Nevada state senator in Carson City drafting a bill to outlaw all of Nevada’s legal brothels – not just the ones in Lyon County – and put Phil and hundreds of other workers out on the street.

Why can’t these moralists follow Phil’s example and simply live and let live?

People like Phil neither need nor deserve to have this legislative Damocles sword hanging over their heads yet again.  It’s…just…not…right.  Leave these folks alone!

David will still have considerable out-of-pocket medical and travel expenses after the surgery.  And donation boxes have been set up at the Bunny Ranch, Love Ranch, Sagebrush Ranch and Kit Kat Ranch brothels in Mound House to help cover those expenses.

If you’re in the neighborhood, please consider the sacrifice and risk Phil and his family are taking and stop by to kick in a couple bucks.  Or if you don’t live in the area, you can donate online (I just did) to a GoFundMe account Phil has set up.

God bless you, Phil.  And best of luck, David!