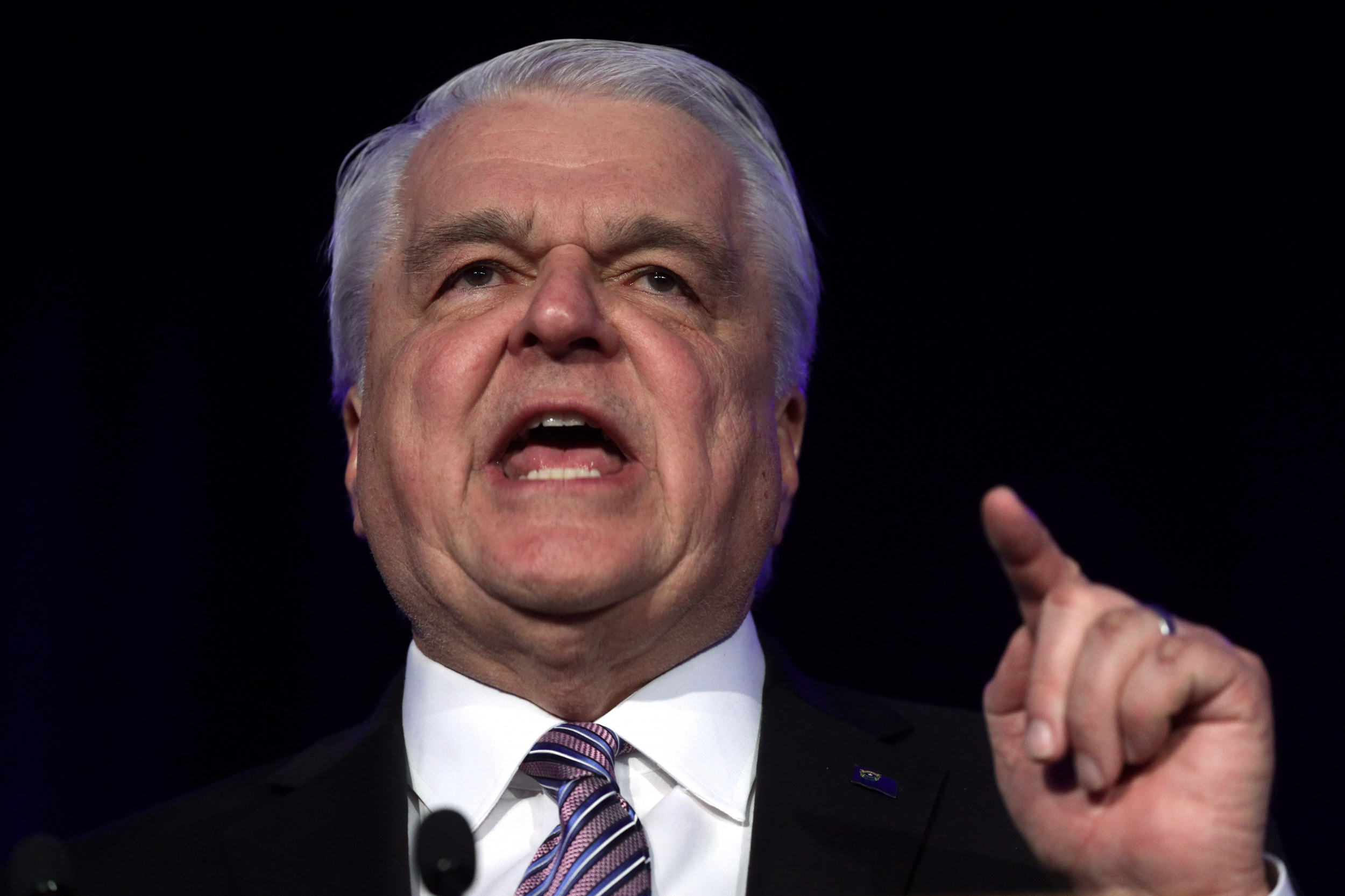 (Chuck Muth) – While the competition is fierce for the lofty distinction of America’s Worst Governor, Nevada Gov. Steve von Sisolak remains in the running at the head of the pack.

First he said he wouldn’t mandate that everyone wear a face diaper for political reasons.  Then ordered them.  But exempted large gatherings from the order as long as they were looting and rioting at a “peaceful protest.”

The guy seems to change his mind and the rules every time he changes his skivvies.

Unless the bar serves food.  Then you can safely sit at a table and drink your favorite adult beverage…but not at a bar.  Makes perfect sense.

Similarly, according to von Sisolak’s latest contradictory edict it’s not safe to walk into a restaurant without a mask, but it is safe once seated to remove your mask to insert a fork or spoon into your open mouth.

Apparently von Sisolak’s health experts and medical professionals have discovered that COVID-19 can’t spread as long as you’re chewing on a T-bone or tossed green salad.

Again, according to von Sisolak’s latest imperial order it’s safe for six people to sit at a table in a restaurant…but not seven.

All of this makes about as much sense as wiping BEFORE you poop (h/t: Larry the Cable Guy).

And some people still wonder why so many people aren’t taking von Sisolak’s scoldings to “mask up” seriously?

In an “off-script” scolding during his Thursday night press conference re-ordering bars to close, von Sisolak – with a straight face, mind you – declared that nothing about his mandatory mask order was “political.”

When one Republican member of the Assembly attempted to wear a “Trump 2020” mask on the floor of the Legislature, Frierson prohibited it.  Said the message on the mask was a “distraction.”

So you have to wear a mask – you know, so you don’t kill grandma – but you can’t protect grandma with one the PC Police consider to be a Thought Crime.

This is ALL about politics.  Has been from the beginning.  Still is.

* The Las Vegas Review-Journal notes in a report this afternoon that “The state with the highest unemployment rate in the country as of May” – meaning, Nevada – “is going into its fourth week without a director to run the employment office.”  That’s on von Sisolak, the Worst Governor in America.

* Gov. von Sisolak broke the state.  Now the shrill lefties on his team are demanding that he jack up taxes.  Instead, he’s calling on Republicans in the state Senate to come up with a tax hike proposal.  Sorry, Charlie.  You created this mess.  You clean it up.

* The millennial snowflakes over at Battle Born Progress – posting on social media from their mom’s basement – have been among the loudest of the leftwing loudmouths demanding “revenue enhancements” instead of budget cuts during the special session.  But don’t ask them whose taxes they want to raise and by how much.  They respond like screaming monkeys.

* Democrats are also begging Congress for a federal bailout for the economic devastation Nevada is suffering as a result of the #SisolakShutdown.  Sorry, Charlie.  You created this mess.  You clean it up.

* If Democrats in the Nevada Legislature – aided and abetted by Republicans who foolishly went along with them – hadn’t recklessly jacked up spending by a billion dollars in each of the last two legislative sessions, there wouldn’t be so much that needed to be cut today.  It’s the spending, stupid.

* Nevada Policy Research Institute has filed a new lawsuit challenging the ability of government employees who get paid with tax dollars from serving in the Legislature where they get to vote on how tax dollars are spent.  If successful, both Senate Majority Leader Nicole Cannizzaro and Assembly Speaker Jason Frierson would be booted from office.  I can live with that.

*  In addition, Republicans would lose wishy-washy moderate Sen. Heidi Gansert and RINO King Assemblyman Glen Leavitt.  I sure as hell could live with that, too!

“A former Umatilla County, Oregon commissioner candidate who claimed a racist letter was left anonymously in his mailbox actually wrote the letter himself, according to police.  In a Monday email, Hermiston Police Chief Jason Edmiston told The Observer that candidate Jonathan Lopez had confessed to writing the hate-filled letter.” – Western Journal, 7/8/20