Nevada Gov. Sisolak Now has Blood on His Hands 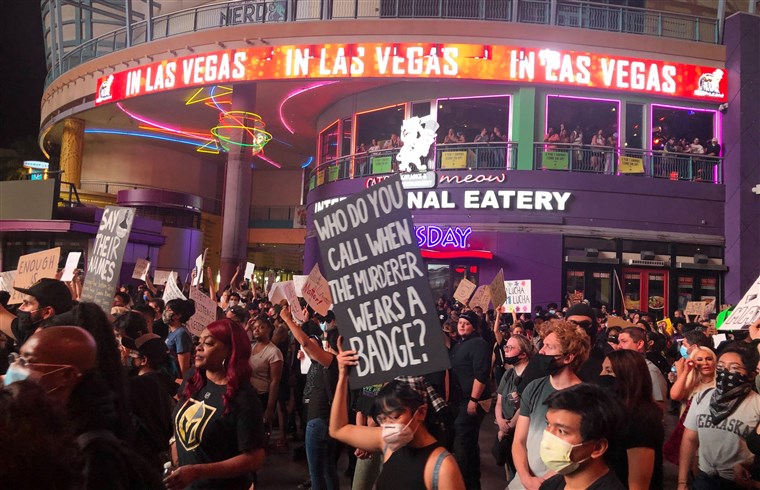 (Chuck Muth) – On Monday, President Donald Trump scolded some of the nation’s governor’s for being wusses in their response to the violent anarchy, rioting and looting that has been occurring over the past several days…

“Most of you are weak.  It’s like a war. And we will end it fast. Be tough. … You have to dominate (and) if you don’t dominate, you’re wasting your time.”

“To suggest that the authorities in Nevada – local law enforcement, the National Guard – are unable, have failed, or refuse to secure and protect the residents of the State of Nevada and their rights, privileges, and immunities, is misinformed.”

Sheriff Lombardo then provided additional details of the incident…

The sheriff noted that the officer was in “extremely critical condition on life support.”

“At approximately 11:22 p.m., officers encountered a subject who was armed with multiple firearms and appeared to be wearing body armor.  During the interaction the subject reached for a firearm and the officers engaged him. The suspect was struck by gunfire and transported to the hospital, where he was pronounced deceased.”

All of this after a weekend of violent riots and looting in downtown Las Vegas and on the Strip, so it’s not like anyone couldn’t see this coming.

A Fox5 report on Sunday morning noted that “downtown (Las Vegas) was littered with graffiti spelling out ‘Black Lives Matter’ and varieties of ‘f— cops.’  Windows of local businesses had been shattered and trash had been left in the roadways.”

The report on Saturday night’s mayhem noted “acts of violence, which included one protester hurling a cinder block at one officer, injuring him as others were pelted with rocks.”

In addition, “one Metro patrol car was burned and two additional cars were damaged, along with buildings.  Police said 11 officers were injured overnight Saturday that ranged from cuts to broken bones.”

Apparently, President Trump wasn’t “misinformed” at all.  This is on Gov. Sisolak who, literally, now has blood on his hands.

These are not protests.  They’re riots.  And Metro police officers shouldn’t even be in this position, let alone have their hands tied in dealing with it.

Gov. Sisolak – who we all know, thanks to COVID-19, has almost unlimited “emergency” powers – didn’t impose a curfew on the Strip or downtown Las Vegas.  Why the hell not?

Why are police officers, small business owners and law-abiding citizens of the State of Nevada not being protected from these mobs of violent rioters and looters by the governor?

Why has the governor issued “house arrest” with his “stay home for Nevada” political catchphrase for law-abiding Nevada citizens – including repeated demands to wear a face mask and observe social distancing – but hasn’t enforced those orders for rioters and looters?

Gov. Sisolak’s “leadership” for both the COVID-19 situation and now the riots has been a disaster for Nevadans – including our economy.  He’s mismanaged both, exercised horrible judgment, operates from a position of fear, and continues to blame the President for his own failures.

The man is clearly way in over his head.  But his allies in the Legislature, Democrat and Republican alike, as well as many in the media, continue to just let him lead all of us over a cliff.

If Gov. Sisolak continues to fail to protect us and protect our police officers from this lawless violence and destruction, don’t be surprised if citizens themselves start protecting themselves.

And if that happens, it’s REALLY gonna be a bloodbath.

Do your damn job, Governor!

“A Las Vegas police officer was shot in the back of the head, execution-style, while trying to disperse protesters on the Strip last night. He’s on life support now & it’s not looking good.  Please pray for him. Las Vegas needs you @realDonaldTrump as @GovSisolak has failed us.” – Courtney Holland

“Police officer shot. He needs our prayers. This has to stop today. Violent thugs do not control our community. Implement a curfew. Call out the national guard, police need help. Arrest all violent rioters immediately. No bail. Law and order.” – Las Vegas City Councilman Stavros Anthony

“Wear a mask unless you’re protesting.  Social distance unless you’re marching with thousands of others.  Stay at home unless you’re looting.  I feel as though our political class might be full of s***.” – Ben Shapiro

“A surreal moment occurred in Van Nuys, CA yesterday as the LAPD arrested a number of people attempting to protect a store from looters.” – Twitchy.com, 6/2/20

“BREAKING: South Philadelphia Gun Store owner shoots & kills one of 3 or 4 armed looters who pointed gun at him first. Lock on gate cut with bolt cutters. Back door shattered & kicked in. Gun owner was on high alert after attempted break-in earlier in the week. – Steve Keeley, FOX 29, Philadelphia, 6/2/20

“Battle lines are more clearly being drawn these days, between those who clearly believe America is irredeemably evil and must be violently overthrown and those who believe America remains greatest country on earth, based on rule of law, individual liberty, inalienable rights.” – Mollie Hemingway