Sadly, the only thing worse than the Nevada Republican Party being “radio silent” on the issues and politics of the day is when its JV squad of communications “experts” actually weigh in. 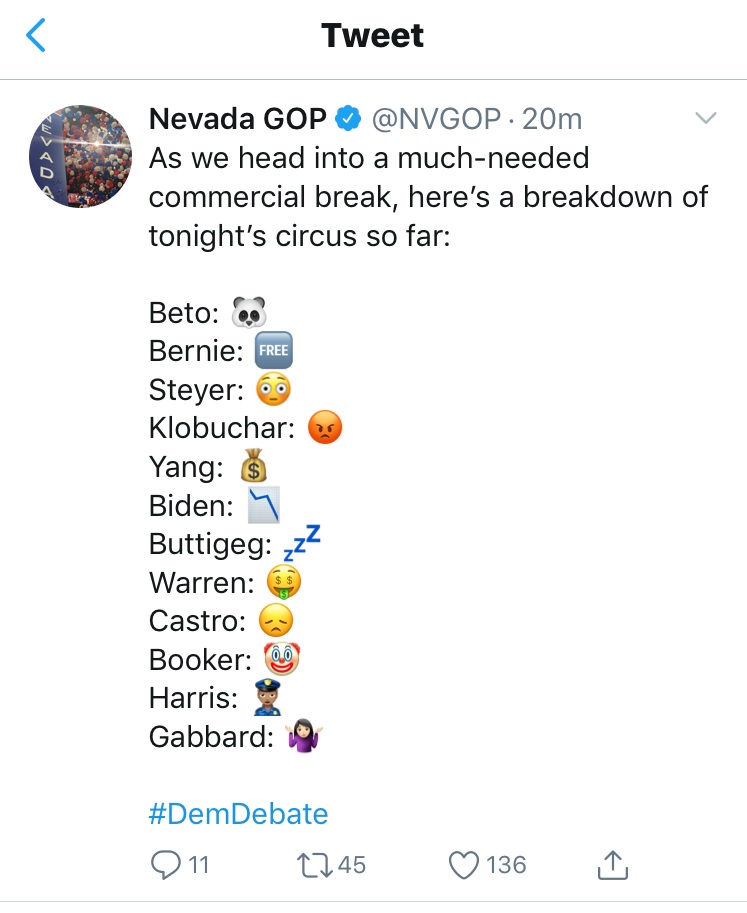 Yes, the GOP is going into the 2020 battle with the Dems armed to the teeth with…emojis!

The party, under the leadership of “shadow” Chairman Mike Slanker, followed that up with an absurd fundraising email bearing the grammar-challenged Subject line: “ha! This will make you laugh, we’re making them nervous!”

Bear in mind, this came from people who are supposedly professional communications experts and are being PAID to send out messages that look like they came from a publik skool 3rd-grader.

“This is great,” wrote Nevada GOP executive director Will Sexauer in the email.  “We have the Nevada Democrats as nervous as ever with our incredible ground operation and grassroots fundraising game (YOU!).”

Yes, the party that successfully lost almost every single race up and down the ballot less than a year ago in Nevada has the Democrats “nervous as ever.”

Puh-lease.  They’re laughing their arses off at the Nevada GOP’s emoji-happy not-ready-for-prime-time players.

But if Ms. Becker runs the same kind of lame campaign the GOP establishment and “professional” consultants usually run in election cycle after election cycle, the odds of knocking off the Dems’ Big Kahuna are slim – especially considering the voter registration advantage she enjoys.

Time to break out the emojis!

Interesting development in the other competitive race, Senate District 5.

This is an “open” seat with a Dem registration advantage, but not as big as in SD6.

For months it was rumored that either or both Assembly members nestled in that district – Ozzie Fumo and Lesley Cohen – were mulling throwing their hats in the ring.

But a press release this week announced that Senate Democrats have anointed and endorsed another candidate, who is not currently in office.  Which you gotta believe means Fumo and Cohen have decided not to make the run.  Interesting.

Also this week, Republican Dr. Carrie Buck – who ran for this seat in 2016 – announced her candidacy.  Buck is a well-qualified, highly-accomplished candidate who the GOP establishment is likely to rally behind.

But as I’ve written ad nauseum, it’s not the best candidate who necessarily wins, but the best campaign.  And as with Ms. Becker, if her GOP consultants run the same kind of campaign they ran for her the last time, they’ll likely end up with the same result.

Which would be a terrible disservice to Dr. Buck.  And to the voters of SD5.  And the citizens of Nevada.

Nevada’s 3rd Congressional District is the GOP’s best chance to pick up a seat in 2020.  Incumbent Democrat Susie Lee will be running for re-election for the first time and will never be as vulnerable – especially with her recently-announced support for the Pelosi/Schiff impeachment circus.

There are two Republicans vying for the chance to take her out, Dan Schwartz and Dan Rodimer.  Both have considerable weak points, but today let’s just focus on the third quarter fundraising numbers announced this week.

According to a Las Vegas Review-Journal story on Thursday, Schwartz has raised $264,000.  But $179,000 of that came in the form of a personal loan to his campaign.  Which means he’s actually only raised $85K from independent donors over the past two quarters.

Not exactly a ringing endorsement of his candidacy.

Rodimer announced his candidacy in August.  He reported raising about $241,000, which includes a personal loan of $65,000.  Which means he raised some $176K from independent donors.

The third candidate in this race, Tiger Helgelien, announced this week that he was pulling out and would instead run for a seat on the Clark County school board.

By contrast, Lee reported raising over $430,000 in the third quarter and has over a million dollars stashed away in her bank account, with no threat of a serious primary challenge.

Even Schipwreck’s killer emojis aren’t likely to help in this race.

It would take a miracle – and an avalanche of emojis – for Republicans to steal the 4th congressional district seat from incumbent Democrat Rep. Steven Horsford.  But since the GOP won the seat in the 2014 “red wave,” hope springs eternal.

There seems to be 234 Republicans running for this seat, but we’ll just focus on the top of the heap today.

Jim Marchant was first to jump in the pool, announcing his candidacy during the second quarter of fundraising.  He added $58,000 in the third quarter, bringing his total to around $176,000 with some $92,000 cash on hand.

Lisa Song Sutton raised an impressive $128,000 in the third quarter, including a $20,000 loan to her campaign.  She reportedly has $99,000 cash on hand, putting her slightly ahead of Marchant at this point.

Sam Peters reported raising $111,000 in the third quarter, but $69,000 of that was a personal loan to his campaign.  Meaning he only raised around $42K from independent donors.

To put all of this in perspective, Horsford enjoys a 38,000-voter registration advantage, has $750,000 socked away in his campaign bank account, and won’t have a primary to worry about.

Most, or all, of these GOP candidates should seriously take a look at maybe running for a different seat that’s winnable – the way Helgelien did.

“Nancy Pelosi needs help fast! There is either something wrong with her ‘upstairs,’ or she just plain doesn’t like our great Country. She had a total meltdown in the White House today. It was very sad to watch. Pray for her, she is a very sick person!” – President Donald Trump

“Donald Trump has taught other conservatives how to fight and actually win for a change. That’s why the leftists will do whatever they can to try to stop him. It’s time for all of us to draw a line in the sand and end the nonsense, cheating, and lies from the left.” – Donald Trump Jr.