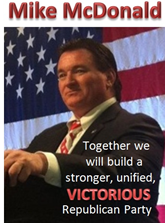 Over the past year Michael McDonald has cemented himself as perhaps the most consequential Nevada Republican Party chairman since John Mason rode herd over the party faithful in the mid-1990s.  I should know; I was Chairman Mason’s first executive director in 1995.

This is no mean feat.  Under Mason’s leadership Republicans in Nevada became the majority party for the first time since Reconstruction, hosted the most financially successful Western States Republican Leadership Conference (WSRLC) in the regional event’s history, oversaw the election of a Republican governor in 1998 and a Republican U.S. senator in 2000.

Big shoes to fill.  But here are three big developments under McDonald’s watch that come close to rivaling Mason’s accomplishments.

The idea of Las Vegas hosting the GOP’s national convention grew out of the success of the 1995 WSRLC at the MGM Grand.  It was a great idea that just never caught fire.

Indeed, it was a great idea that laid dormant until the April 2013 Republican National Committee (RNC) meeting in Beverly Hills, California where McDonald resurrected and began promoting it, not just within the RNC, but among Nevadans as well.

By August, McDonald’s spark of an idea began spreading like a brushfire.  Since the Nevada GOP, by law, is unable to serve as the organizing committee, a separate non-profit group, Las Vegas 2016, was established and has since done a fantastic job in positioning Vegas as a finalist for hosting this extremely prestigious event.

The final decision will be made by the RNC this summer.  If Vegas wins, baby, thank Chairman McDonald.  But even if we miss out on 2016, it’s now more likely than unlikely that a future national convention will come to Sin City.

I, along with many others, have long advocated pre-primary endorsements.  But even under Chairman Mason we were never able to persuade enough other members of the Central Committee to abandon its position of neutrality in primaries and take a more active leadership role.

But at the 2014 Nevada Republican Party convention under McDonald’s leadership and direction, elected delegates ratified for the first time a pre-primary endorsement policy and issued its first seals of approval.  And because of it, the GOP’s official top-of-the-ticket this election cycle consists of a Hispanic, Gov. Brian Sandoval, and a woman, former state Sen. Sue Lowden.

For a party that has faced challenges with both of those demographics, this is a hugely symbolic accomplishment.  It also brings some philosophical balance, with conservative Lowden pushing the ticket rightward from Sandoval’s middle-of-the-road record.

For many, many years now, many Republicans have complained that an over-emphasis on certain hot-button social issues – particularly abortion and gay marriage – have hurt the party with independent voters in general elections.

Whether that’s true or not will continue to be hotly debated for years to come, I’m sure.  But rightly or wrongly, for better or worse, the Nevada Republican Party at its convention this year became, I believe, the first state party in the nation to adopt a platform that is silent on both the abortion and gay marriage issues.

Now, contrary to some of the hysterics I’ve read from some social conservatives who are extremely unhappy with this decision, it doesn’t mean the Nevada Republican Party is now pro-abortion and anti-marriage.  What it means is that convention delegates recognized that there are a lot of good Republicans who take opposing views on these two issues for a variety of reasons and, therefore, the party is taking a neutral position on them and letting the candidates and voters address them as they see fit.

And while this decision could certainly backfire and both issues could be added back into the platform in 2016, my guess is they won’t – and that a growing number of other state GOP parties will follow Nevada’s lead in the future.

Maybe even in the national platform adopted at the 2016 Republican National Convention in Las Vegas where the Nevada GOP’s endorsed candidate for president will be crowned!