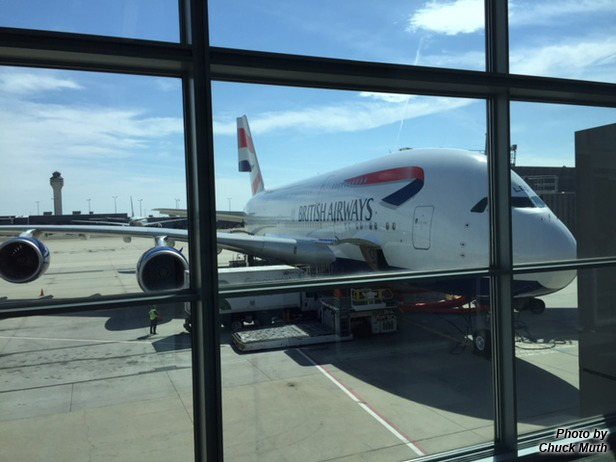 So I flew on Southwest Airlines from Vegas to Dulles Airport outside DC on Wednesday.  Had a connecting flight in Denver.  Arrived in Denver just before 10:00 am.  My flight to DC was scheduled for 12:40 pm.  But I noticed there was another flight to Dulles leaving at 10:30 am.

Since I had plenty of time to make it to the gate, I figured I’d check to see if they had any seats available.  They did.  Wahoo!

But then I was informed that to take one of those empty seats on the flight leaving in 30 minutes, it would cost me an additional $438!

On what planet does this make sense, Southwest?

Naturally, I waited for my scheduled flight.  Got off the plane – first time through Dulles.  And on the way through the terminal noticed the biggest freaking passenger plane I have ever seen.  I mean, this thing was a monster.  And this picture I took of it really doesn’t do it justice.

Anyway, I then dialed up ridesharing service Lyft on my iPhone and requested a pickup.  Driver was there in a jiffy (does anyone under the age of 50 ever use the word “jiffy” other than Jiffy Lube?).  I mentioned the plane to my driver, Jorge, who informed me that it was an Airbus and seats over 500 people.

The Southwest plane I was on seats around 150.  So that’ll give you an idea of how much bigger this British mamma-jamma is.

Jorge was polite, friendly, professional and courteous. We had a great chat on the way to my hotel.  Driving for Lyft is his full-time job and he’s quite happy with it.  As are, according to his reviews, his customers.

Grabbed another lift from Lyft for the ride back to Dulles Thursday afternoon.  My driver this time was Robert, who despite being, literally, hearing-impaired provided a great ride and conversation to the airport.  Five-star service all the way.

I bring up my experience with Lyft for a reason.  Because just before leaving Las Vegas, I saw an ad in the Las Vegas Review-Journal, paid for by the taxi cartel, which slammed ride-sharing services such as Lyft as being as dangerous as hitch-hiking.

When your opponent lies in a debate, you know they’re on the wrong side of the issue.

But the point is irrelevant in any case.

This debate is NOT about whether or not people like me who use ride-sharing services are safer in a taxi.  Frankly, that’s none of the government’s business.

Ride-sharing services are membership clubs.  I voluntarily, as an adult in what is supposed to be the freest country on the planet, signed up to be a member.  I know the risks involved and am willing to accept them.

Ride-sharing is NOT like taking a taxi.  Taxis pick up people off the street.  Any people. You don’t join a club to grab a taxi.

A taxicab company is a true public conveyance.  A members-only ride-sharing service is not.  As such, the government has NO COMPELLING public interest in regulating it. The issue isn’t safety.  The issue is government control vs. individual liberty.

Whether or not the Republican majority in the Nevada Legislature allows ride-sharing should be a no-brainer.

Unfortunately for us, no brain seems to be the norm in Carson City these days.