My 7-Point Proposal for Fixing the Illegal Immigration Problem 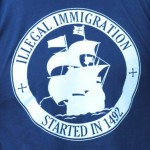 When it comes to the issue of illegal immigration – and that’s what I’m talking about here; illegal, not legal immigration – no one, except Newt Gingrich, wants to talk about the 800-pound gorilla in the room: What do we do with the estimated 10-12 million illegals presently residing in the U.S.?

And there are really only two options here, folks.

We can either deport/force-march millions of people back over the border – which would entail breaking up many, many families; some, as Gingrich has pointed out, who have lived here since before Al Gore invented the Internet. Or we can figure out an acceptable compromise, short of “amnesty,” to allow some, under specific conditions, to remain.

Sorry, but I have no interest in being part of “Trail of Tears II” in American history. So those of you who embrace the “Deport ‘em all and let God sort ‘em out” position can stop reading right here. For the rest of you, consider the following seven suggestions as a jumping off point for further discussion.

1.) Enforcement first. Build the fence. A high one. Texas to California. A real fence, not an invisible, electronic one. And for those who say fences don’t work, please explain why there’s one around the White House.

2.) Immediate deportation of illegals who commit serious new crimes in addition to the crime they already committed by sneaking into this country. Serious crimes; not jaywalking or spitting on the sidewalk. No excuses. No mercy. No delay.

3.) Issuance of a “Blue Card” for those who wish to remain, which would include paying a significant fine – the funds from which would go directly toward building the fence. Let those who broke the law pay the cost of preventing others from following in their footsteps.

4.) Anyone caught here illegally without a Blue Card in the future…immediate deportation.

5.) Blue Card holders can NEVER become an American citizen unless they return to their home country, get in line and apply to immigrate here legally…with a possible exception for certain American military service. No other path to citizenship/voting for liberals.

6.) English becomes the official language of the U.S. government. No more multi-language ballots or DMV tests. If you don’t understand or can’t read English, then getting an interpreter is YOUR responsibility, not that of American taxpayers.

7.) You must remain gainfully employed or be supported by a relative or sponsor (such as a church or other non-profit community group). No more federal taxpayer-funded social services. Period.

Anyway, that’s a start. For those who object, I challenge you to put your own proposal on the table for dealing with the illegals among us. Otherwise shut up and let those who are serious about fixing this problem finally fix this problem. Adios.