(Chuck Muth) – Back in the days of the Old West in 1874, a black railroad worker, unhappy with working conditions, picked up a shovel and whacked the white construction foreman on the back of the head.  He was sentenced to hang.

However, the state Attorney General intervened and persuaded the Governor to call off the worker’s hanging.  Instead, the railroad worker was appointed sheriff of a small town that was standing in the way of completing the railroad project.

This was, of course, the fictional plot of Mel Brooks’ hilarious 1974 movie Blazing Saddles.

Now let’s fast-forward to today’s “woke” culture.  And let’s say an artist painted a picture depicting that fictional scene of the black railroad worker standing on the gallows awaiting the rope.  And let’s say that the picture was being displayed in an art show at a local mall.

Next thing you know, you’ll have social justice warriors protesting in front of the mall, claiming the display was celebrating the lynching of a black man – aided and abetted by a willing press happy to add fuel to the racial fire.

Alas, this isn’t fiction.  A similar incident actually took place recently at the Galleria Mall in Henderson (of course), where a model train display featured a set of miniature figurines on the gallows awaiting the hanging of a man.

Make no mistake.  Public hangings for offenses such as murder, rape and robbery were commonplace in the Wild West.  In fact, they were so prevalent that some of the tougher judges, such as Isaac Parker, earned the nickname “hanging judges.”

So the depiction of such a hanging is certainly historically accurate.  And those convicted of such crimes were sentenced to the gallows, regardless of race.  These were decidedly NOT “lynchings” without a legal trial.

Back to the model train display. 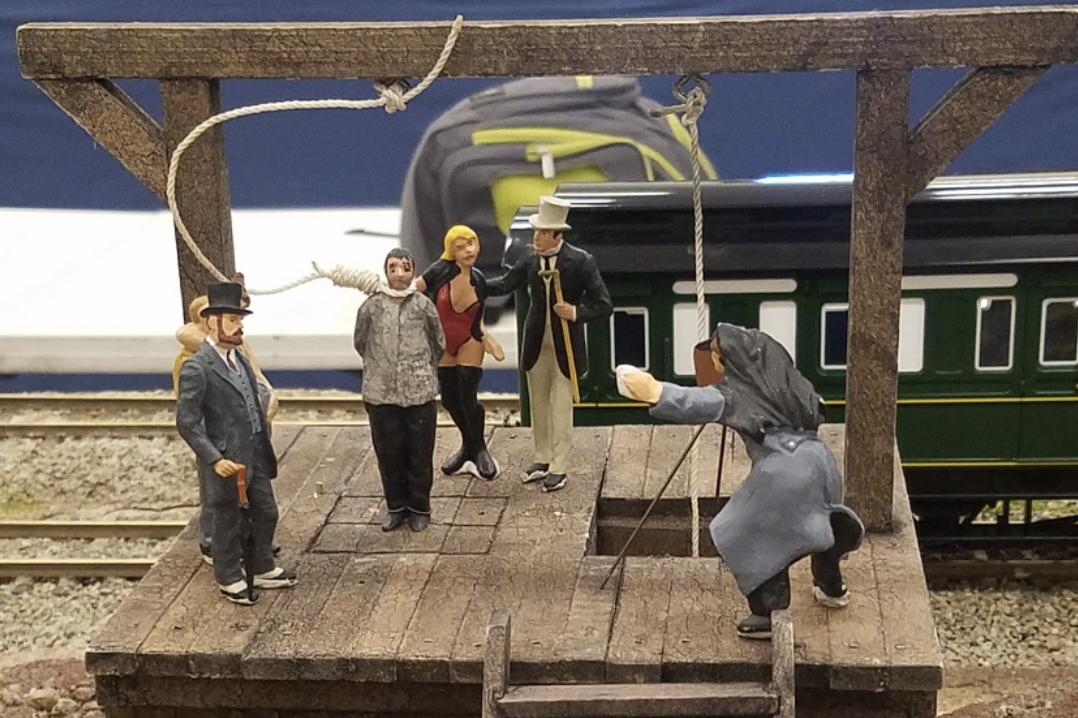 Robert Bush, president of the Las Vegas chapter of the National Action Network of Nincompoop Yahoos (NANNY*), claimed that “community members are outraged that a racist train display showing a black man being prepared to be hung was tolerated and allowed at the mall for hundreds of children, families & community members to see.”

“Racism has no home here in Nevada,” race-hustlin’ Gov. Steve Sisolak tweeted. “This is completely unacceptable and our community deserves answers.”

Sue Jerrems, president of the Las Vegas Garden Railway Society (LVGRS), which erected the display, rightly described the figurine of the man being hanged as “nondescript.”

“We never looked at it as a black man before,” she told the Las Vegas Sun. “It was just part of a frontier scene. It had no racist implications.”

But even in a worst-case scenario; if the figure of the man being hung was clearly black – which he wasn’t – the historical fact is that black men were legally hung for serious crimes in the Wild West, just as white men were.

Nevertheless, “Once someone pointed out the implications of it, we took it down,” Jerrems added. “We apologized.”

But that wasn’t enough for the disciples of the Church of Perpetual Racial Outrage.  They hopped up on their high horse, staged protests at the mall, and demanded that LVGRS members “undergo cultural sensitivity training.”

But the protests had the desired effect.

Despite the fact that the display was decidedly NOT racist, the “woke” corporate owners of the mall tucked tail and ran for the hills; issuing the de rigueur statement condemning it…

“We are disgusted by this display. We took immediate action demanding the company remove it. While they were cooperative, we will not be working with them again. We are destination for the entire community and apologize to our customers and tenants who were rightfully offended by this.”

Anyone wrongfully offended by this needs a padded room and some serious therapy.

The only true outrage in this entire incident is what these race-hustlers did to the members of LVGRS in their asinine effort to publicly shame and falsely portray them as racists.

“LVGRS is a group of people who enjoy sharing our love of trains with the public,” Jerrems said in a written statement to the mall.  “We don’t get paid for this, as it is all volunteers that make up the club. There was no intent to cause distress or harm to ANYONE.”

And here’s another inconvenient fact: The scene depicted was actually created in the early 1990’s and has been included in the display all over Nevada for some 20 years without anyone making a stink about it…mostly because there’s absolutely nothing there to make a stink about.

Race-hustler Joe Biden is in the White House (why is THAT not “racist”?) and Democrats are facing the likelihood of an electoral wipe-out in November.  So the left is in a panic and grasping at any straw they can find – and they don’t care how many innocent people they take down with them.

“If I have learned one thing from life, it is that race is the engine that drives the political Left. When all else fails, that segment of America goes to the default position of using race to achieve its objectives. In the courtrooms, on college campuses, and, most especially, in our politics, race is a central theme. Where it does not naturally rise to the surface, there are those who will manufacture and amplify it.” – Ward Connerly