In case you haven’t heard about it yet, a baker’s dozen of high-ranking Republican women in Nevada sent a blistering letter this week to Republican State Senate Minority Leader Michael Roberson and the Senate GOP Caucus over the “dissing” the boys did to the party’s only GOP woman in the upper house, State Sen. Barbara Cegavske.

You can read the letter here.

You can read the Las Vegas Sun story on the letter here.

And the Review-Journal story on it here.

First, the story is actually even worse than the letter details with regard to Sen. Roberson’s hand-picked recruits for senate races last year. While it’s true that one of the candidates, Mari Nakashima St. Martin, is a woman, she was actually Roberson’s second choice.

His first choice, announced with much fanfare at the time, was a guy who brought with him some baggage that apparently wasn’t known at the time he was recruited by Roberson. It was only after said baggage became public that the man dropped out and St. Martin was apparently the only other person Roberson could find to run on short notice before the filing deadline expired.

Secondly, after the letter became public Sen. Roberson trotted out a steaming bowl of BS as his excuse for blowing off Cegavske and “relegating her to the sidelines.”

And to be perfectly honest, it really had nothing to do with her being a woman.

It’s actually much worse than that.

Now, bear in mind Cegavske is the senior-most member of the Nevada Legislature this year. In fact, she now drives around with the official “Senate 1” license plate. That’s experience money can’t buy.

And in 14 of her 16 terms, according to the RJ story, Cegavske has served on the money committees that handle the state budget…so she knows the drill as well as, if not better than, almost every other legislator up there.

Yet Roberson refused to appoint Cegavske to the Senate Finance Committee again this coming session, which will be her last due to term limits.

In addition, Cegavske served as Assistant Minority Leader for the Senate GOP caucus last session…a leadership position she was also stripped of by Roberson this year in order to give the slot to moderate freshman State Sen. Ben Kieckhefer.

Now, according to Roberson in both the Sun and RJ news reports, he would have “loved” to have had Cegavske on the Finance Committee again; however, he claims, there were only three seats available so there just wasn’t any room for her.

One of those seats he gave to his left-hand man, moderate Sen. Kieckhefer, who also took Cegavske’s minority leadership post.

The second seat was given to freshman State Sen. Pete “Tax My Meat” Goicoechea – who moved up to the big kids’ senate table from the assembly in November.

And Roberson gave the third seat to…Roberson. Even though he’s already the minority leader with all the power and clout he could ever want or need.

Because that’s what Bill Raggio did! And everybody knows (but won’t say out loud) how much Michael Roberson desperately wants to be Bill Raggio.

Including legislating as a moderate instead of the conservative he pretended to be to get elected.

And that, folks, is what this really is all about (other than the fact that Roberson just doesn’t like Cegavske personally).

Indeed, Roberson sold his soul for 30 pieces of silver back in March when he hitched his wagon to Gov. Brian Sandoval’s proposal to once again raise taxes on Nevada’s families, car owners and businesses this year to the tune of $600 million.

Cegavske is a conservative who voted against the Sandoval tax hike last session and will likely oppose it again this session. And that’s just not what “Moderate Mike” wants. He wants Republicans who will chuck the GOP’s platform against tax hikes and vote with him and Sandoval and the Democrats on raising taxes again this year. 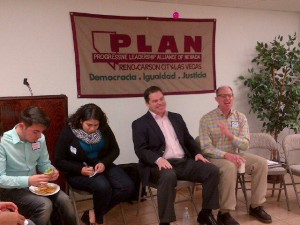 And THAT’S the real reason Cegavske was kicked out of her leadership position and off the Finance Committee. “Moderate Mike” doesn’t want anything to do with conservatives who might buck the governor and rock the boat on tax and spending issues.

Because he’s a conservative, that’s why.  And Michael Roberson’s hostility
towards women is NOTHING compared to his hostility towards
conservatives!

And now you know…the rest…of the story.