McBrothels: You Want Fries with That, Sweetie? 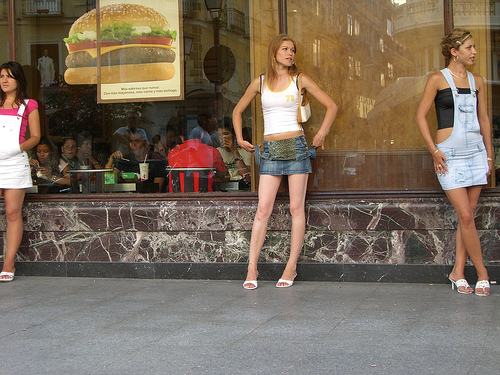 In a column published on June 7, 2018 by the Reno News & Review, Dennis Myers criticized the “No Little Girl” campaign to outlaw LEGAL brothels in Lyon County (Lyon County Question 1 on November’s ballot), noting that “the saying is misleading, since it is illegal for underage girls to work in the brothels in the first place.”

“Misleading” is a charitable description of the crapplola these “saviors” have been shoveling in their high-horse moral crusade.

Mr. Myers also wrote that anti-brothel activist Melissa Holland of the Awaken Reno organization “was originally scheduled to speak at the Nevada Women’s Lobby (NWL) luncheon” that he attended, “but she failed to appear and sent (Kasia) Klaus in her place.”

He noted that Holland’s scheduled talk was to be on “the sex trafficking epidemic in Reno” and had intended to ask Holland or Klaus “to define the epidemic, since it has not received such a description in most news coverage or public agency announcements.”

Alas, “Klaus said she wasn’t allowed by Holland to represent Awaken or to respond to questions.”  How convenient.

But here’s what Klaus DID say in her remarks that every resident, homeowner and business owner in Lyon County – currently home to four LEGAL brothels – better read…

“She said prostitutes do not hang out in ‘back alleys’ anymore, but when they are asked ‘Where are you guys hanging out?’ they answer ‘McDonald’s, the mall, Starbucks.’”

Now, let’s make sure everyone understands EXACTLY what we’re talking about here…

In Washoe County/Reno it happens in your neighborhood McDONALD’S, THE MALL and STARBUCKS!

One must assume the ladies are also prowling the local Denny’s, where the infamous Grand Slam Breakfast might need to be renamed the Grand Slam-Bam-Thank-You-Ma’am Breakfast.

Kidding aside, Mr. Myers made one final great point in his column: Klaus and her moral crusaders do “not distinguish between those who choose prostitution and those who seek to get out. She applied the term ‘sex trafficking’ to all prostitution.”

Look, everyone’s against sex trafficking (except the sex traffickers).  But sex trafficking is when someone is forced or coerced to engage in prostitution against their will.  Which means there is no sex trafficking going on in Lyon County’s legal brothels.  None.  Period.  All the women who work there are there of their own free will.

In fact, working at a legal brothel is so much safer, and potentially so much more financially rewarding, that Lyon County’s brothels receive over a thousand applicants a month from women across the country – and, indeed, from around the world.  It’s also a gazillion times safer for “sex tourism” customers – who also come from around the country and around the globe.

The sex workers are tested for STD’s weekly – and there has never been a reported case of HIV in Nevada that has been traced back to a legal brothel.  On the other hand, what happens in Vegas – also where prostitution is illegal – doesn’t stay in Vegas.  You take those STD’s home with you!

In addition, legal brothel customers need not worry about getting conked in the head and having their wallet stolen.  Or getting roughed up by some violent street pimp in a motel parking lot.  Or getting entrapped by some sweet-talking undercover vice cop at McDonald’s or Starbucks or at the mall.

Live and let live.  It’s the Nevada way.  Why would anyone want to fix that which isn’t broken?  Unless, of course, you WANT happy hookers in mini-skirts propositioning you for a date while waiting in line for a Big Mac.