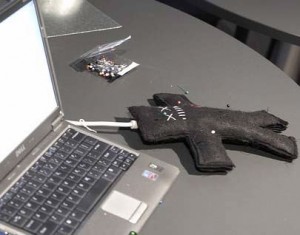 I just returned from an annual meeting of state legislators in New Orleans at which I attended a briefing on what proponents are misleadingly and disingenuously calling the “Amazon Tax.” A better name, considering all the hocus-pocus and black magic surrounding it, would be the e-Voodoo Tax.

Simply put, the tax would apply to purchases made over the Internet by people who don’t live in the state where the Internet retailer is located. It’s being pushed by traditional brick-and-mortar retailers who are trying to stick it to online competitors. After all, misery loves company.

It’s also being pushed by big-government legislators who suffer an insatiable desire to constantly find new ways to suck money out of the private economy and into the black hole of government operations and programs.

Supporters call it the Amazon Tax because Amazon.com is the nation’s leading online retailer…and because it’s always easier to sell a tax on a big, bad corporation than it is to tax the “little guy.” But that itself is the first big hocus-pocus fraud of this issue.

You see, Amazon won’t pay the tax; YOU will. If e-VooDoo Tax efforts are successful, when you pay twenty bucks to purchase a book online, Amazon will charge you an extra $1.20 “use” tax for the privilege – or whatever the going “use” tax rate is.

Notice my use of the word “use” rather than “sales” here. That’s because that’s the second little bit of black magic proponents are using to foist this tax on the American consumer.

You see, states aren’t allowed to reach across state lines and charge a “sales” tax on purchases its citizens make in another state. Commerce clause and all that. So what the sneaky little SOB tax addicts did many years ago was create a “use” tax instead. And according to the Nevada Department of Taxation, this “use” tax “is imposed on tangible personal property used in Nevada on which Sales Tax has not been paid.”

In other words, out-of-state purchases.

Now, most people assume this means merchandise purchased through toll-free numbers, from a catalogue or over the Internet. And it does. But guess what? That t-shirt you purchased while on vacation in Orlando at Disney World? You probably owe a “use” tax on it because, again according to the Department of Taxation, “Most goods, wares and merchandise are taxable.”

“But wait,” you say. “I paid Florida sales tax on that Pluto baseball cap. Wouldn’t this be double taxation?”

Why, yes it would. So guess what? Nevada “graciously” recognizes the sales taxes paid to another state. However, “if the Sales Tax paid is less than 8.10% then the difference needs to be reported as Use Tax” in Nevada.

Of course, almost no one even knows they owe this “use” tax on merchandise they buy on vacation or otherwise out-of-state. And because such sales are virtually impossible to identify and collect from individual “tax cheats” like you, you can see why the government is trying to force online retailers such as Amazon.com to do its dirty work for them.

Again, this whole thing is nothing more than a desperate scheme by greedy government apparatchiks to suck more money out of your wallet and mine.

The “use” tax itself is an evil attempt to get around interstate constraints on the imposition of sales taxes. So instead of trying to get online retailers to collect this insidious tax, all “use” taxes should be repealed outright. So let it be written; so let it be done.