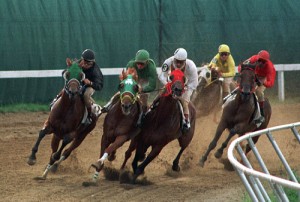 With the “Race to Replace” President Barack Obama in full swing now, and more voters tuning in after returning from summer vacation, let’s take a look at the field of Republican presidential candidates.

First, beware of polls in Nevada. Unless the pollster is polling the small minority of registered Republicans who are likely to show up at a caucus on caucus day – since there is no early, absentee or proxy voting – the results are likely to be way off.

What counts in Nevada isn’t general public opinion, but pure grassroots organization. Mitt Romney has it – in spades – thanks in large part to Ryan Erwin, one of the two top GOP political consultants in the state, being on his team.

Ron Paul has it, too. But his core supporters continue to be largely volunteers organized via the Internet and social media who are, nonetheless, extremely passionate and highly motivated. Exactly the kind of folks who show up at caucus meetings.

Herman Cain has more of a regiment in Nevada than an Army. But multiple, well-received Silver State visits over the past year could pay off should he still be standing next February 11th after some candidates drop out of the race following Iowa and New Hampshire.

None of the other candidates appear to believe Nevada is worth competing for, as none have spent much, if any, time here, or devoted many resources to the state. Nevadans may as well print up milk cartons for Gary Johnson, Michele Bachmann, Newt Gingrich, John Huntsman and Rick Santorum. All have apparently conceded the state to Romney and Paul (Nevada’s caucus delegates will be awarded proportionally, not winner-take-all).

However, Rick Perry could change that dynamic quickly if he lands the other of the state’s top two GOP political operatives in his camp, Mike Slanker.

Slanker has extensive Nevada experience as chief strategist for former Rep. Jon Porter and former Sen. John Ensign. Plus, he’s already been actively organizing the state on behalf of Gov. Brian Sandoval and Sen. Dean Heller, so his “learning curve” would be more like a rolling hill than mountain ridge.

Nationally, the race looks quite different.

It’s only a matter of time before Huntsman, Santorum and Johnson see the writing on the wall – especially since Johnson, a former governor of New Mexico who outpolls Huntsman and Santorum, is routinely excluded from the major, televised debates.

Cain and Bachmann and Paul have significant pockets of core support, but lack the firepower to win the nomination over the long haul. They’ll stay in the race through the early states, including Nevada, hoping for a miracle. But by sometime around Super Tuesday, reality will bite them.

Tuesday’s Tea Party/CNN debate did neither Romney nor Perry any favors.

Romney is no tea party conservative; never has been, never will be. His inability to see that despite it being a state’s “right” to pass RomneyCare, that doesn’t mean it was a good idea. And no matter how many times he tries to explain that RomneyCare is different from ObamaCare, the general public, especially GOP primary voters, ain’t buyin’ it.

But if Romney emerges as the guy who can win the general election, the GOP foot soldiers will bite their tongue and cast their lot with him. The enemy of my enemy is my friend. And at least Mitt Romney isn’t John McCain.

As for Perry, he was the viable, credible candidate who social conservatives and libertarian conservatives were supposed to be able to rally ‘round to give Romney a run for his money.

And indeed, Perry came out of the starting block strong. But with social conservatives attacking him over the once-obscure HPV vaccine issue, and immigration hawks pounding him for granting in-state tuition to illegals, any chance of coming in and blowing away the field has evaporated.

On the issue of Social Security, it helps Perry in strong GOP states in which non-Republicans aren’t allowed to vote and states not dominated by geezers who are easily misled and scared. But among the under-informed elderly and independents, the Social Security issue probably breaks for Romney. At this point it would appear to be a wash for the two leading candidates.

And then there’s Newt.

The former House Speaker certainly has his faults and weaknesses, but he’s also an experienced, skilled politico who is perhaps the best articulator of the conservative message in the land – and anything but afraid of throwing a punch. Plus, a lot of older Republicans (who vote!) still have fond memories of Newt successfully leading House Republicans out of the political wilderness in 1994.

Indeed, Rich Galen – a longtime professional political operative – declared Newt one of the three winners in the Tea Party/CNN debate (Romney and Perry being the other two).

“Newt was the big winner,” Galen wrote in his Mullings.com blog. “(Moderator Wolf) Blitzer let him speak and no one is better at reducing complex issues to understandable terms than Gingrich. He was allowed into the conversation on a regular basis and used his time wisely and well. He will raise a lot of money from this appearance.”

Newt’s pacing himself at the back of the pack, just waiting for an opportunity. And remember, at this point in the last election John McCain was in fourth place. Of course, the opportunity Newt needs may never present itself, but if it does….

Let me wrap up with this thought: These eight-candidate debates are mildly interesting and sometimes entertaining, but hardly informative. It’s impossible to drill down to the meat of an issue when the 90 minutes allotted to answer questions is divided eight ways.

So in addition to the upcoming major eight-candidate (nine if Gary Johnson is ever invited back) debates, let’s see one night of four one-on-one debates.

• In Round One we’d have the Libertarian, Ron Paul, facing off against the Social Conservative, Rick Santorum. The debate would be primarily over national defense and foreign policy, with a side question about Santorum’s endorsement of RINO Sen. Arlen Specter over conservative then-Rep. Pat Toomey back in 2004. (I’ll never get over that!)

• In Round Two we’d have the moderate, establishment candidate, John Huntsman, teeing it up against the conservative tea party heartthrob, Michele Bachmann. And to get the ball rolling, we’ll throw a little red meat into the center of the cage by opening the debate with a question about gay marriage/civil unions.

• Round Three would feature Herman “The Businessman” Cain vs. Newt “The Educator” Gingrich. Both men are highly intelligent, highly confident and highly talented orators. They are soundbite machines who would probably make one hell of a general election ticket if they both weren’t from Georgia.

• And in the Main Event, since they are #1 and #2, let’s see a head-to-head featuring Romney vs. Perry – with Gary Johnson as the special guest referee/moderator (hey, it’s the only way to work the guy into the program!).