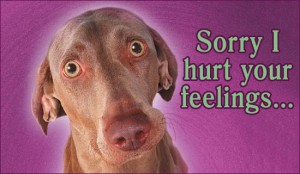 In response, I wrote a blog post on Saturday pointing out all of J-Mac’s factual errors in his original post which indicate, at the very least, intellectual laziness. And apparently that hurt J-Mac’s widdle feelings, as evidenced by the lame, whiny response he put up on Sunday which, in fact, acknowledges that I was correct about his original post and he was wrong.

The poor schlub apparently can dish it out but has a hard time taking it. As the saying goes, if you can’t run with the big dogs, stay on the porch. But I’m sure this little lap-puppy thinks he CAN run with the Alphas, so let’s call him out….

What started this whole e-brouhaha was J-Mac’s call to have Sen. Roberson recalled. In doing so, J-Mac incorrectly “reported” that Arizona state Sen. Russell Pearce was recalled on July 8. That’s not true. A sufficient number of signatures had been turned in for a recall election, but the election itself has not even taken place, let alone Pearce being recalled.

That said, in concluding his error-filled rant against Sen. Roberson, J-Mac falsely (what else?) wrote: “Arizonans did it. They recalled a senator. So can you Nevada! Time to take this guy to the cleaners. We deserve better!”

Actually, the only person I hear calling for a Roberson recall is this political science drop-out. But if he really wants to play in the big leagues, here’s my challenge to him: Do it.

It’s easy to sit on your arse behind a laptop keyboard and call for Sen. Roberson’s recall. Actually mounting a recall effort and succeeding is something else entirely. So come on, J-Mac. If you really want Sen. Roberson recalled, then do it. Lead the effort. In other words, either put up or shut up. I double-dog dare you.

Something tells me Sen. Roberson is quite safe and secure.