Is Congress Nostalgic for Gas Lines? 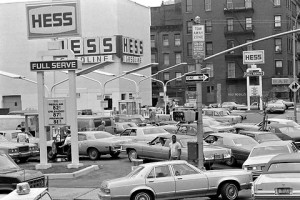 I was my 14-year-old daughter’s age when the first gas lines appeared in 1973, thanks to the newly created Mideast oil cartel we would soon know as OPEC and President Richard Nixon’s ill-advised effort at government control of oil prices.

For those who weren’t born yet, instead of whipping into your neighborhood convenience store, driving immediately up to a pump and filling your tank for less than a buck a gallon, you actually had to wait in bumper-to-bumper lines, often stretching down the street and around the block, to “put a tiger in your tank.”  (Ask your grandma)

It was around this time that the liberal mantra about taxing the oil industry’s “windfall profits” began to take root.

The Iranian oil crisis of 1979 brought Round 2 of the gas line scourge.

President Jimmy Carter succeeded in making a bad situation worse by imposing gas rationing, which in turn resulted in gas line waits of hours to get just a few drops of gas – no more filling up! – every other day depending on whether your license plate  ended in an odd or even number.

Panic set in. Fistfights broke out at the pumps.  The economy fell into a severe recession.  A living nightmare.

Fortunately, Ronald Reagan was elected president in 1980 and immediately jettisoned the Nixon-Ford-Carter oil price controls.  “By 1986,” the Washington Times reported in a 2006 retrospective, “the deregulation of the petroleum industry led to record production levels and a glut of oil that drove prices down to $10 a barrel.”

That was the good news.  Unfortunately, in 1980 Congress decided to stick it to “Big Oil” and implemented the threatened “windfall profits tax.”  Here’s how the Washington Times reported on how that worked out…

“By the time it expired in 1988, the tax had generated $40 billion in revenue instead of the $175 billion estimated by the Treasury. After oil prices collapsed in 1986, the tax produced no revenue at all.”

Thanks largely to highly efficient domestic energy industry, John Burnett in U.S. News & World Report recently pointed out that the United States now stands “as the world’s largest producer of oil and gas, surpassing energy superpowers in Russia and the Middle East.”

As such, pump prices have plunged since last summer.

Alas, like a bad cold sore, lawmakers – who never seem to learn a good lesson about bad policies – are back in Washington, DC rattling the cage about imposing new taxes on oil and gas producers.  Is it going to take Round 3 of gas lines to get these misguided people to wake up and smell the petroleum?