Is “Any” Republican Better than “Any” Democrat? 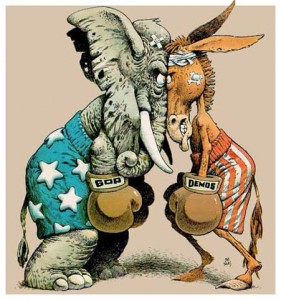 Interest is high because filing for this year’s election opens in just a few weeks, Democrats do not yet have a gubernatorial candidate, and Sisolak may be the only person in the entire state who has a chance at beating “Republican” Gov. Brian Sandoval.

I put “Republican” in quotes because, frankly, Sandoval has been anything but a good Republican in office. Here’s a dirty dozen list of examples of why our Nevada governor is a Republican in voter registration only (RIVRO?)…

1.)  He’s consistently raised taxes – including TWICE extending the “temporary” 2009 tax hikes that were supposed to “sunset” in 2011 – despite clear and unambiguous campaign promises that he would do no such thing.

The only thing “Republican” about that is that former Republican President George H.W. Bush broke a similar tax pledge.  And we all know how THAT turned out in ’92!

And even if you’re not a hard-liner on tax hikes, how can you trust a politician who’s proven his word isn’t worth the proverbial bucket of warm spit?  I mean, how can anyone believe anything Brian Sandoval now says about anything in his re-election campaign?

2.)  He’s the only GOP governor in the nation to rush headlong into implementing ObamaCare and expanding Medicaid.

3.)  He’s undermined the Gibbons Tax Restraint law by signing bills allowing local county commissions to approve local tax hikes in Clark and Washoe counties without a 2/3 vote of the Legislature.

5.)  He led the effort to give an estimated 60,000 illegal immigrants the privilege of obtaining driver’s licenses – though, go figure, most aren’t able to pass the written test!

6.)  He twisted the arm of Amazon.com to force them to start collecting sales tax on purchases you make online.  That new tax hike hit us all on New Year’s Day last week.

7.)  He promised to push for universal school vouchers…but has given them nothing but lip service.

8.)  He’s appointed very few conservatives to his administration…and usually cut the few he has after just a short time on the job (see: Jim Guthrie for school superintendant).

And has appointed Democrats to influential and powerful positions, especially judicial, even though highly-qualified Republicans were available for those slots.

9.)  He failed to stump aggressively on behalf of Republican legislative candidates in 2012, doing not much more than allowing them to have their photo taken with him to use in campaign literature.

10.)  He and his handlers have systematically worked to undermine, if not destroy, the Nevada Republican Party – including bleeding it dry by telling major donors not to contribute money to the organization.

12.)  He rarely attends local GOP meetings or fundraising events, and was caught telling a fib about why he cancelled a scheduled fundraising dinner for the Washoe County Republican Party last fall.

So let’s face it, there’s absolutely nothing about Brian Sandoval to make conservative Republican voters feel anything more than passive indifference about his re-election.

Indeed, you could very possibly see a record number of “None of the Above” votes and votes for third-party gubernatorial candidates in this year’s election.

First of all, Sisolak is indeed giving the race serious consideration, telling the RJ…

“It’s a huge decision.  The pundits say it’s impossible to beat Sandoval.  That surprises me. He’s likable, but not necessarily effective.  He has wide support, but it’s very, very shallow.”

Sandoval has been anything but effective…as we continue to lead the nation in unemployment and housing troubles, while scraping the bottom of the barrel in education.  And one could easily characterize his first term as the “Seinfeld Governorship” – it was all about nothing.

So as Republicans go, Sandoval’s lame.  Fine.  But is there anything about Democrat Steve Sisolak for Republicans to like?  Well, let’s take a look…

1.)  The RJ notes that during his time in politics, Sisolak has “never met a tax he didn’t question.”  In fact, while Sandoval supported last year’s “more cops” and gas tax hikes in Clark County, Sisolak opposed both.

2.)  Unlike almost any other elected official, let alone a Democrat, Sisolak has stood up to the public employee unions – including the all-powerful FIREFIGHTERS.  On the other hand, the RJ notes that both the police and firefighters unions are likely to support Sandoval’s re-election.  Lovely.

3.)  From the RJ:  “Sisolak’s business card includes his cellphone number” and he “tries to return every query from constituents, whether in person, via email or by phone.”

Even the Nevada Republican Party chairman doesn’t have Sandoval’s cellphone number, let alone the public!  Go ahead.  Try sending Sandoval an email or calling him on the phone and see if you hear anything back other than a form letter, a low-level staffer or a generic email.

4.)  As a member of the University Board of Regents, Sisolak “questioned tuition increases and high presidential salaries” and “is comfortable being the lone ‘no’ vote,’ as he was in September when he voted against a fuel tax increase.”

When was the last time, if ever, that Brian Sandoval stood up against the crowd or his handlers at R&R Advertising?

5.)  Former University Regent colleague Mark Alden, a Republican who served on the board with Sisolak, says Sisolak is “outspoken, “tells the truth,” is “very well prepared for meetings” and “actually reads the documents.”

After the whoppers Sandoval told us in his 2010 campaign, not to mention the ones his campaign is telling us again this year, how refreshing would it be to have a governor who told you the truth, even if you disagree with his position?

6.)  Sisolak is a business owner and investor.  Sandoval is a lawyer who has spent almost his entire adult life in government.

7.)  “What gives (Sisolak) the most pleasure…is clearing away red tape so small business can start up or expand and hire employees.”

Sandoval, on the other hand, stood by idly while Democrat Secretary of State Ross Miller eliminated an exemption from the business license fee for small, home-based start-up businesses.

8.)  Staffers at the county commission refer to Sisolak as “super commissioner” because “he puts so much time on the job.  The RJ referred to Sandoval in the story as “detached.”

And if you look at his bio, Sandoval is never happy being what he is and is always looking to be something else.  Thus, all the talk that he’s only running for re-election in 2014 to position himself for a run at the U.S. Senate in 2016.  Or a cabinet position.  Or another judgeship.  Or something.  (His handlers laughably actually think vice president could also be in the cards.)

9.)  Sisolak told the RJ that “small-business owners who are barely making it can’t afford more taxes.”

Sandoval, on the other hand, has twice extended a doubling of the state business license fee and twice extended a ginormous hike in the state’s insane, job-killing payroll tax.  Over a billion dollars worth of taxes on Nevada’s businesses!

10.)  Sisolak “doesn’t like a proposed margin tax plan the teachers union is pushing via a ballot initiative this year.”

Sandoval has also said he opposes this tax hike.  Then again, we’ve heard that line before. Why in the world would anyone believe the Boy Who Cried No New Taxes this time?

11.)  Sisolak “said Nevada needs tax reform and should examine taxing some nonessential services” to “broaden the tax base in a state with a growing service economy.”

That’s the same position advocated by the very conservative Nevada Policy Research Institute think-tank, and something to take a look at as long as it’s REVENUE NEUTRAL.

Sandoval hasn’t even talked about tax reform, instead being content with simply raising existing taxes.

12.)  Former Clark County Commission Chairman Rory Reid says Sisolak is “willing to say what he thinks and confront those who disagree with him.”

Sandoval, on the other hand, is only willing to say what his handlers think and let him say while refusing to even meet privately with conservatives, tea partiers, Ron Paulers and any other Republicans who disagree with him.

While the RJ story doesn’t mention Sisolak’s positions on abortion or gay marriage, the fact that Sandoval is pro-choice and pro-gay marriage means there’s no real reason for social conservatives to support the Republican Sandoval over the Democrat Sisolak on those issues.

Among the most important conservative constituencies in the GOP coalition, that pretty much leaves gun owners.  And while the story also doesn’t mention that issue, Republicans point to Sandoval’s veto of SB221 in the last session – a bill requiring feel-good/do-little expanded background checks – as a reason for backing him.

Fortunately, the public was on the gun rights side this time, and the governor still needed to run for re-election.  But what if public opinion had shifted on the issue…or Sandoval no longer needed to worry about re-election.  Can gun rights supporters really trust this man any more than anti-tax conservatives can?

Still, I’ll be interested in learning more about Commissioner Sisolak’s positions on gun rights to see if there’s anything that might DQ him from consideration.  But if not…

Can anyone tell me why a liberal Republican who is under the control of R&R Advertising, hostile to movement conservatives and hell-bent on destroying the Nevada Republican Party is more preferable than a fiscally conservative Democrat?