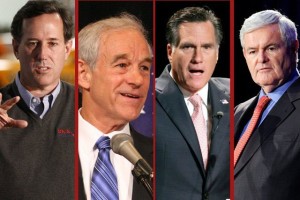 In assessing the Iowa caucus results, we can safely say that social conservatives Michele Bachmann and Rick Perry lost big in this rural, white socially conservative state. They’re out.

Jon Huntsman was never in. And never will be.

Rick Santorum ran on a social conservative anti-abortion/anti-gay platform in a rural, white socially conservative state in which the voters have a far greater interest in those issues than most of the voters in most of the other states. He also darned-near literally lived in Iowa for a year.

And yet….he still only pulled a quarter of the vote.

Santorum claimed in a fundraising email this morning that he is “the only authentic, passionate conservative who can unite the GOP.” Not. He has no national network, and while his fundraising will surely enjoy a bump, it won’t be anywhere near what he needs. I predict his fifteen minutes of fame is more likely to last about seven.

Mitt Romney’s folks did a good job at playing the expectations game. By not seriously campaigning there, the Romney team would have us believe that the Iowa results were terrific news. Not.

This is the guy who is the presumed nominee and has been the presumed nominee for a long, long time – including GOP establishment endorsements up the wazoo. And people in general have a human desire to be associated with winners. Yet, Romney still only received a quarter of the vote despite his surrogates and the Romney super-PAC dumping a ton of money into Iowa.

No matter how you spin the Iowa results, Romney was not chosen by 3 out of 4 conservative Republican voters. His 25 percent ceiling remains in place. I suspect he can and eventually will break through that ceiling, but it’s real and he certainly didn’t crack it in Iowa.

The most significant, positive performance in Iowa was by Ron Paul. He, too, has had a ceiling in the neighborhood of 10-12 percent, but chalked up a strong third-place finish as a pro-life, libertarian isolationist. No easy feat.

Unlike Santorum, Paul also has a national network of grassroots supporters dating back to even before his 2008 presidential run. And he will surely be able turn on the fundraising spigot after his performance in Iowa.

Paul’s problem is on national security – the most important function of the “Commander in Chief.”

While many can accept that Paul is an isolationist, they aren’t willing to accept a pacifist. We all know what Ron Paul wouldn’t use the military for; however, in this dangerous world, under what circumstances WOULD he find use of force appropriate? Inquiring minds wanna know.

Again, Paul is pro-life, so social conservatives can live with him. He proved that in Iowa. And he’s clearly the most fiscally conservative/limited-government guy in the race. But he cannot win the GOP nomination without giving voters a strong sense of confidence that a serious, unprovoked attack on America would result in an old-fashioned royal butt kicking. Voters don’t have that sense at this point, and I’m not sure they ever will.

And then there’s Newt Gingrich.

Yet in Iowa yesterday, Gingrich defeated two socially conservative candidates – one who won the straw poll there just last summer; the other with a cache of cash. He also defeated Jon Huntsman….but hey, EVERYBODY beats Jon Huntsman. So no big deal there.

Also consider this: Because of his rise six weeks ago, Gingrich had over $9 million worth of negative ads dumped against him in Iowa. Indeed, it’s been estimated that 45% of all advertising in the closing weeks of the campaign were anti-Gingrich ads. And yet he still lost by less than 14,000 votes to both Romney and Santorum.

Unlike Santorum, however, Gingrich has a national network of supporters and donors built up over more than two decades who will carry him forward in all the other states. Unlike Paul, he’s solid on national defense. And unlike Romney, he’s perceived as a conservative. So maybe it’s just wishful thinking, but I don’t think anyone should (again) write Gingrich off at this point.

If you’re going to kill the king; kill the king. They didn’t kill the Gingrich campaign in Iowa. He has lived to fight another day. And that’s historically when Gingrich has proved to be most dangerous politically. He campaigns much better as an underdog challenger than as a front-runner.

Prediction: By the time the campaign (finally) makes it to (irrelevant) Nevada, it’ll already effectively be a three man race between Romney, Gingrich and Paul. And after Super Tuesday, it’ll be a head-to-head matchup down the stretch between Romney and Gingrich.