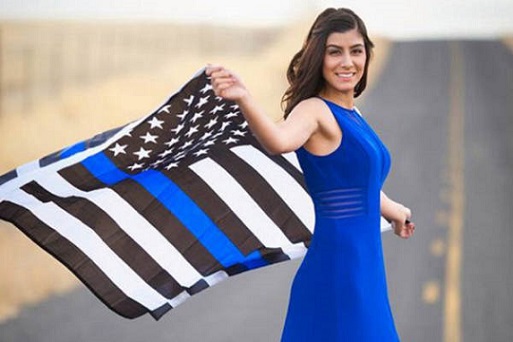 (Chuck Muth) – NEWS FLASH: There are criminals, many violent, among us.

And when they come for you…who ya gonna call?

It’s law enforcement officers who stand between this criminal element and you.  They risk their very lives EVERY DAY to serve and protect.

They are verbally abused, condemned by race-hustlers, smeared by self-serving politicians, spit upon, assaulted, shot and killed in the line of duty.  They sure as hell don’t deserve it.

When these men and women strap on their gun, pin on their badge and leave their family every day…they don’t know if they’re gonna make it back home.

For the life of me I don’t know how they do it.  But I do know WHY.

Because they care.  Thank God they do.  Otherwise, you and I would be nothing but defenseless wildebeests being hunted by packs of wild hyenas.

So damn right, I Back the Blue.  Blue Lives Matter.  De-FUND the police?  Up yours.  De-FEND the police.

You wanna force me to choose between dirtbags, scum, gang-bangers, rioters, looters and thieves…or law enforcement officers…I’m taking the men and women in blue every day ending in “y.”

You want me to turn my back on the courageous professionals who risk their very lives to stand between the law-abiding and violent anarchy?  Screw you AND the horse you rode in on.

You want to “peacefully protest,” then stay on the freaking sidewalk.  Stop verbally abusing our police officers.  Stop spitting on them.  Stop throwing rocks and bottles at them.  Stop trying to incite a clash.  When they tell you to disperse…DISPERSE.

And here’s a pro tip: When getting arrested, DON’T RESIST (dumbass).

Law enforcement officers are not the problem.  YOU are.

You run around screaming mind-numbingly stupid slogans into a bullhorn.  Some of you burn buildings and cars.  Loot stores.  Deface private property.  And you think that’s the way to win friends and influence people?

Talk about stuck on stupid.

While there are clearly pockets of racism in society today – both white AND black – there’s no “systemic racism.”  The real problem is systemic victimhood promoted by two-bit race hustlers hellbent on blaming “whitey” for their own failures.

To quote philosopher Larry Winget, “Shut up, stop whining and get a life.”

You’re damn lucky to be living in the United States of America.  They only thing holding you back is…you.

If you’re black and wanna live the American dream, here are four things you can and should do TODAY…

But you’ll also be warmly welcomed with open arms by our side.

You see, we don’t give a damn about your skin color.  Or your race.  Or your religion.  Or your national heritage.  Or your sexual orientation.  Hell, we even accept vegans!

All we care about is your commitment to our American heritage of individual liberty, limited, constitutional government, free markets and low taxation.

Come on in.  The water’s fine.

Or stick with losers, poverty pimps and race-hustlers like Al Sharpton.

Your choice.  It’s up to you.  That’s part of what makes the United States the greatest country on the planet.

P.S.  Speaking of race-hustlers, I fired off a letter to Las Vegas City Councilman Cedric Crear on Tuesday taking him to task for politicizing the recent racial unrest and falsely accusing his colleague, Councilwoman Michele Fiore, of being a racist.

But there’s a considerable amount of profanity and vulgarity in it.  Not from me.  I quoted others.

So rather than publish it here in the Muth’s Truths e-newsletter, I’m just going to link to it so those who would rather not be subjected to that kind of language can ignore it.

“Destroying a business is tolerated, reopening one forbidden. Democrats are bailing out rioters, and sending salon owners to prison. Going to church is worse than trying to burn it down.” –