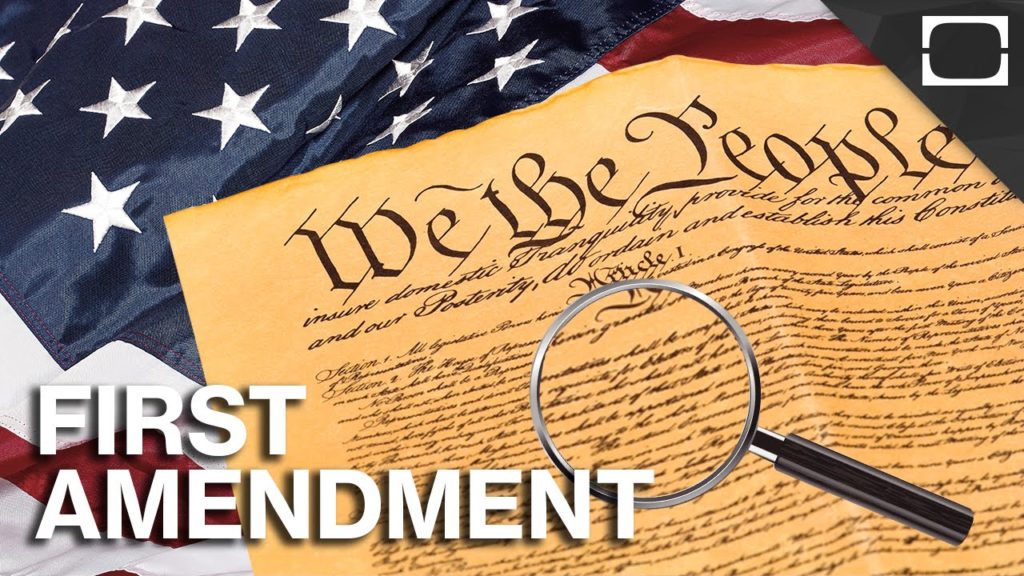 OK, I get this part…

It’s clear some of the current social media giants are censoring, and even banning, speech by conservatives whose opinions they don’t like.  As such, conservatives are rightly ticked off – particularly at Facebook and Twitter.

But here’s the part I don’t get.  Actually, two parts…

1.)  Conservatives used to argue, rightly, that the First Amendment only protected the right to free speech from government control, and…

2.)  That your right to free speech does NOT give you the right to use someone else’s soapbox to exercise your right.

This *should* be a no-brainer.  The language of the First Amendment isn’t complicated.  It’s actually crystal-clear.  Heck, even AOC should be able to understand this…

“Congress shall make no law…abridging the freedom of speech.”

Let’s stipulate that Facebook, Twitter and other social media companies are, in fact, limiting, censoring and, in the words of our Founders, abridging the freedom of speech.

Indeed, it’s not Congress that’s blocking, censoring, shadow-banning, de-platforming or whatever else these tech companies are doing to conservatives and conservative opinion.

There is no First Amendment violation.

And yet there’s a group, including some well-known movement conservative figures, organizing a “Rally for Free Speech” in Washington, DC on July 6 which is advertising that…

“THE 1ST AMENDMENT IS UNDER ATTACK!”

“Our rights guaranteed under the United States constitution are being systematically violated,” DemandFreeSpeech.org states in their ads. “Join the rally to demand unbiased social media, and an end to censorship.”

This is so disappointing.

As a conservative wordsmith, I fully appreciate that “words mean stuff.”

Now, I’ve got no problem with fighting for free, unbiased speech on social media platforms.  But we should be intellectually honest enough not to intentionally mislead an often-gullible public into believing that what these tech firms are doing is a violation of the First Amendment.

And if we do, we’re no better than the liberals we’re trying to fight in the court of public opinion.

Liberals who leave the word “illegal” out of debates over illegal immigration.

As for #2, let’s say you take up a new cause: Equal Rights for Oompa-Loompas.

As per the First Amendment, Congress shall make no law abridging your right to freely speak out on behalf of the oppressed, stigmatized and discriminated-against Oompa-Loompa community.  However…

You have no right to force a newspaper to publish your letter-to-the-editor or op-ed on the subject.

You have no right to force a radio station to have you on as a guest to speak about your issue.

You have no right to demand that your local TV news cover your “Oompa-Loompa Rights Rally.”

That’s not us.  We don’t run to the government for help.

Instead, we create COMPETITORS.

That’s why conservatives read the Washington Times instead of the New York Times.

That’s why conservatives watch FOX instead of CNN.

That’s why conservatives listen to Rush Limbaugh instead of Rachel Madcow.

Conservatives shouldn’t be backing legislation forcing private social media companies to open their platforms to us – which would be an actual First Amendment violation.

Instead, we should be creating and supporting competitive alternatives.

Indeed, while Twitter has silenced the conservative voices of Roger Stone and Laura Loomer on its platform, you can now find them on Parler.

In fact, I suspect all it would take is one 23-character tweet from President Donald Trump to his 61 million-plus Twitter followers – “I’m switching to Parler” – to turn Twitter into the next MySpace in the blink of an eye.

His congressional effort to abridge the freedom of speech isn’t.