How to Boil a Frog During a Chinese Biological Attack 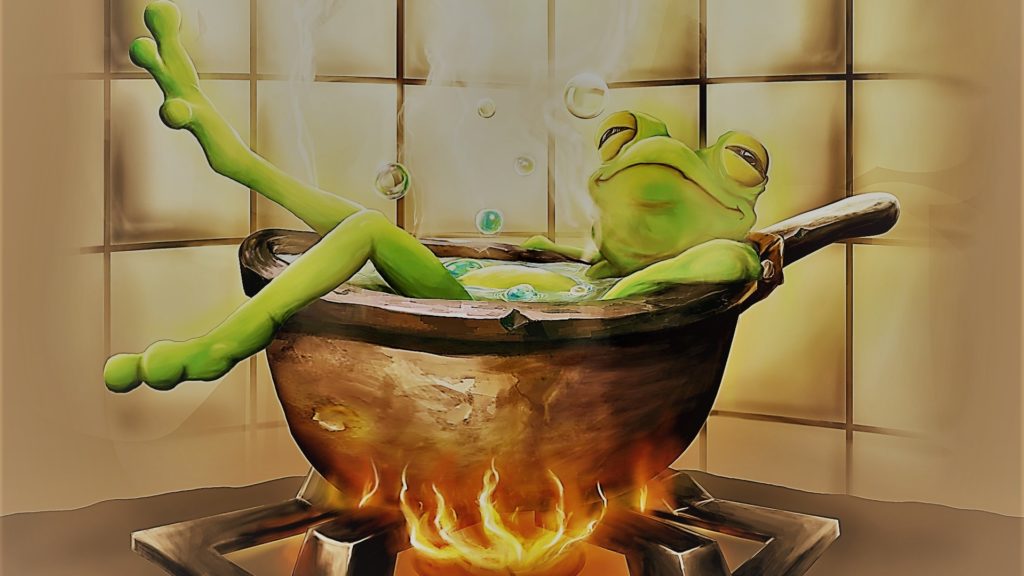 OK, for parents who now find themselves homeschooling, whether they want to or not, here’s a great civics lesson you can share today.

Let’s start off with “How to Boil a Frog,” as explained by Wikipedia…

“The boiling frog is a fable describing a frog being slowly boiled alive. The premise is that if a frog is put suddenly into boiling water, it will jump out, but if the frog is put in tepid water which is then brought to a boil slowly, it will not perceive the danger and will be cooked to death.”

“They who can give up essential Liberty to obtain a little temporary Safety, deserve neither Liberty nor Safety.”

With that in mind, here’s a video of an American trying to drive into Florida who was stopped at a coronavirus checkpoint where officers with the Florida Highway Patrol informed the driver he had to disclose if he was coming from New York, Louisiana, New Jersey or Connecticut and sign a form to that effect.

Recognizing that there’s no way for a lowly citizen to win such a battle with armed officers of the law regardless of how many constitutional rights were being violated, the citizen ultimately was forced to declare that he hadn’t been to any of the four states and was allowed to proceed.

But it is.  And longtime readers will recall that I suffered a similar experience with the Fruits & Nuts enforcers who banned me from entering California nine years ago.

But let’s go back even further…

Way back in the 1970’s, governments all across the country began setting up random “sobriety checkpoints.”  There was no “probable cause” for the stops.  They just started stopping and checking everyone.

And Americans, in the interest of “public safety,” gave up a little of their essential liberty.

Then the heat got turned up a little more with metal detectors at airports – along with “random searches” of your bags even if nothing suspicious popped up on the screen.

Because as we know, any terrorist carrying a bomb in his suitcase would be tripped up when confronted by these questions because, after all, a terrorist would never LIE just to get on the plane, would he?

Once again, in the interest of “public safety,” the government created the TSA and forced every air passenger to subject themselves to not only electronic searches and confiscation of their toothpaste, but pat-downs and strip searches.

And Americans caved in and accepted it.

Radar-gun technology brought us speed traps.  Which were followed by red light cameras.  Which have exploded into video surveillance of public spaces all across the country.  All in the interest of “public safety.”

And Americans have accepted it with barely a peep of protest.

Now, once again, the heat is being turned up under the guise of public safety as it relates to the coronavirus.

The police department in Raleigh, NC declared that protesting against the government was a “non-essential” activity, while other governments banned church services – even church services conducted in the privacy of your own car.

Then there was the guy who got chased down by two speedboats and arrested in California for paddle-boarding alone out in the middle of the ocean.  Meanwhile, in Michigan the governor has banned you from going to your own vacation home or cottage.

And the sheep among us are just sitting back and taking it.  More essential liberties being stripped away, all in the name of “public safety.”

These “summer soldiers and sunshine patriots” (see: Thomas Paine) seem to be taking the advice of former Texas gubernatorial candidate Clayton Williams, who said in 1990 about rape and bad weather…

“If it’s inevitable, just relax and enjoy it.”

If you, instead, object, protest or fight back – you’re labeled a “right-wing” nutcase who wants people to die.

In concluding today’s Civics lesson with your children, wrap up with this quote from former President Ronald Reagan…

“Freedom is never more than one generation away from extinction. We didn’t pass it to our children in the bloodstream. It must be fought for, protected, and handed on for them to do the same, or one day we will spend our sunset years telling our children and our children’s children what it was once like in the United States where men were free.”

Amen (don’t worry; you can say that in homeschools).