How Many of Your Employees Would “Carry a Letter to Garcia”? 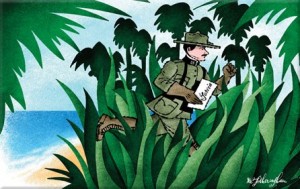 Marketing expert Dan Kennedy writes about watching a Sunday morning news debate over unemployment when a young worker posed the following question to management and unions:

“How will YOU help me avoid losing my job in the future?”

Indeed, the very nature of the question tells you what’s wrong in this country today when it comes to employment.

Because, Kennedy asserts, the real questions this young employee should be asking are:

Funny how in society today most employees never seem to ask themselves those kinds of questions. Which is why we’d never consider sending them to deliver a letter to Garcia.

What? You haven’t read Elbert Hubbard’s “A Message to Garcia” from 1899? Let me nutshell it for you:

During the war between Spain and the United States, President McKinley needed to have a letter delivered to Gen. Garcia, leader of the insurgents, who was “somewhere in the mountain vastness of Cuba – no one knew where.” No mail or telegraph could reach him.

Then someone advised the president that “a fellow by the name of Rowan will find Garcia for you, if anybody can.”

Rowan was sent for and given the letter and “in four days landed by night off the coast of Cuba from an open boat, disappeared on the other side of the island, having traversed a hostile country on foot, and delivered his letter to Garcia.”

Here’s the point of the story. Rowan took the letter without asking, “Where’s is he?” He was simply instructed to “carry a message to Garcia,” and he did. How many of your employees harbor the same attitude and work ethic? I’m guessing…very few.

Instead, as the story goes on to explain, much-maligned employers far too often are saddled with workers who do “nothing but loaf” when the boss’s back is turned. And this is the root cause of employee turnover and unemployment.

“In every store and factory,” explains Hubbard, “there is a constant weeding-out process going on. The employer is constantly sending away ‘help’ that have shown their incapacity to further the interests of the business, and others are being taken on.

“No matter how good times are, the sorting continues: only, if times are hard and work is scarce, the sorting is done finer – but out and forever out the incompetent and unworthy go. It is the survival of the fittest. Self-interest prompts every employer to keep the best – those who can carry a message to Garcia.”

For those such as that young worker on the Sunday morning news program who want to know how to avoid losing their job in the future, some final words of advice from Mr. Hubbard:

“The man who, when given a letter for Garcia, quietly takes the missive, without asking any idiotic questions, and with no lurking intention of chucking it into the nearest sewer, or of doing naught else but deliver it, never gets ‘laid off,’ nor has to go on a strike for higher wages. . . . (Such workers are) wanted in every shop, store and factory. The world cries out for such…”

You might consider including a copy of this column with everybody’s paycheck this week.