Hey, at Least we Didn’t Club Any of ’em!

So we’re heading back to the barn today after a weekend with our friends Jim and Kelli Bieber in San Clemente, California. 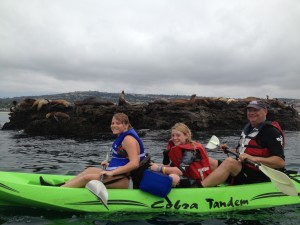 And what an adventure on Saturday! I think we broke about 17 federal laws on a kayak trip about 2/3 of a mile from shore to what is known as Seal Rock.

It’s named Seal Rock because it’s a big rock formation jutting out of the ocean where seals hang out, get a suntan and generally make a lot of noise while raising a big stink…literally and figuratively.

Seriously, this is one smelly piece of real estate. Turns out, seals don’t much care where they go when nature calls. 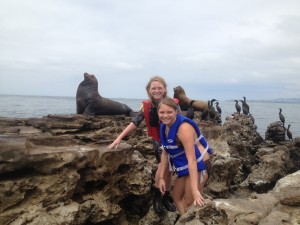 Jenna & Kristen get up close and personal with new friends

So my daughters – Kristen and Jenna – and I paddled out in one kayak while Jim and his son, Jack,

paddled out in another.

skedaddled…although, as you’ll see in the picture, a couple were happy to share their prime real estate with us human interlopers.

Once we got the kayaks up on the rock, we enjoyed a couple hours of swimming, fishing, snorkeling and spear-fishing. 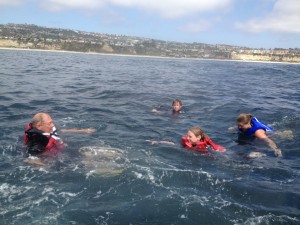 Me, Jenna, Kristen and Jack swimming off Seal Rock

Well, not me and Jenna. We’re not quite as adventurous, and pretty much sufficed ourselves with enjoying the scenery…though we did do one rock-jump and swam with the seals for a little bit.

Kristen, on the other hand, did some fishing and snorkeling. And Jim and Jack did the spear-fishing.

As high-tide rolled in, the rock got smaller and smaller…so we headed back to the beach and returned Seal Rock to the seals.

An amazing, perhaps once-in-a-lifetime, experience. As the saying goes, a good time was had by all…and no seals or endangered species were harmed in the filming.

We now return you to our regular programming…