Here We Go Again: No, Steve Sisolak Did NOT Appoint Greg Hafen 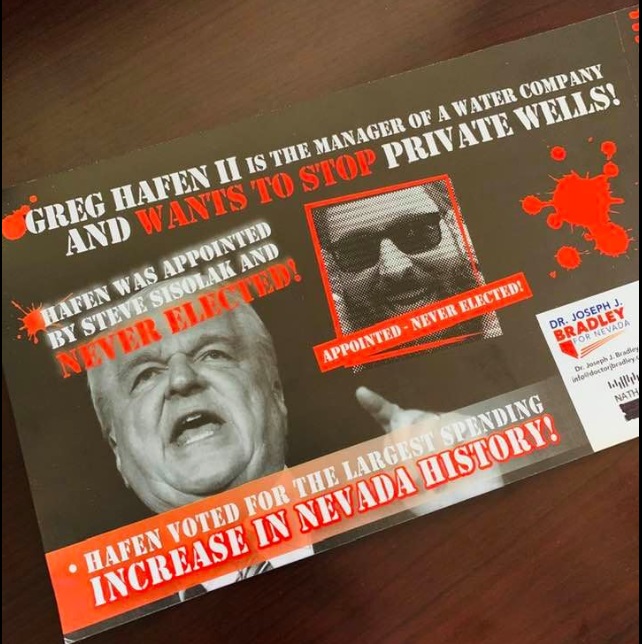 (Chuck Muth) – I can’t believe I have to again write about the false claim made by Dr. Joe Bradley, candidate for Nevada Assembly District 36, on April 26 that his opponent, Assemblyman Greg Hafen, was appointed by Gov. Steve Sisolak.

But some who simply don’t know what they’re talking about continue to peddle this “fake news” on social media.  So let me, hopefully, clear this up once and for all.

In a Facebook video, on mailers and in social media posts, Dr. Bradley claims, flat-out, that “Hafen II was appointed by Sisolak…”

No, he wasn’t.  And Dr. Bradley KNOWS that statement isn’t true.  Which makes it worse.

But after I pointed out the falsehood of his claim, Dr. Bradley doubled down in a separate Facebook post on May 1…

“Not only did Sisolak appoint Hafen II, he even seconded the motion.”

In an interview with on Thursday with Denise Mraz (who, by the way, in my opinion is batsh*t crazy; but that’s another story for another day), Dr. Bradley said of his “Sisolak appointed Hafen” claim…

Now, how do I know Dr. Bradley knows he’s telling a whopper?

Because in a new grammatically-challenged Facebook post published on Friday, he now more accurately describes what happened…

“The Governor whom is destroying our state was a yes vote to appoint Hafen II. This occurred when Sisolak was Clark County Commissioner Chairman and Governor Elect. Watch the video. Sisolak made Gregory T. Hafen II his choice to represent in district 36.”

That’s a far cry from, “Hafen II was appointed by Sisolak…”

And I’ll get back to that referenced “watch the video” in a minute.

So why am I writing about this again?  Here’s why…

“I wonder if Hafen is paying (Chuck Muth) now. … (E)veryone knows Chuck is for hire and he does have an excellent record of mentioning it when someone is a client.”

Indeed, a number of Muth’s Truths readers have posed similar questions, so that’s why I’m addressing this again.

First things first: No, neither Hafen nor anyone else associated with his campaign are paying me, no matter how paranoid and conspiratorial some folks might be about it.

Yes, I was a paid consultant to Dr. Bradley’s campaign until April 5th when we went our separate ways.  And that’s why it was necessary for me to publicly call Dr. Bradley out on his false claim on April 30.

You see, Terry is right.  I disclose in my blog posts when I’m being paid as a consultant to a candidate and did so when Dr. Bradley retained me.  So a lot of people knew I’d been working for Dr. Bradley…but didn’t know I had terminated the Agreement.

And that posed a problem.

When Dr. Bradley started spreading the falsehood that “Sisolak appointed Hafen,” some people, knowing I had been working for Dr. Bradley, thought *I* was behind the attack.  Indeed, Mike Miraglia posed that exact question on Facebook…

“Chuck Muth if you were campaigning for Joe why didn’t you talk to him before he sent out his Flyers.”

Now you know, Mike.  Because I was no longer advising him when he made this decision.

Here’s the thing:  Everyone knows I have no problem playing political hardball.  But I don’t make such blatantly false and unsubstantiated accusations.

So it was important to make sure readers such as Mr. Miraglia – who knew I had been working with Dr. Bradley – knew I had nothing whatsoever to do with this false “Sisolak appointed Hafen” attack.

In fact, Dr. Bradley’s old campaign team put out the same claim that “Sisolak appointed Hafen” – I think in a press release – last fall.  And when I read it, I reached out to his then-campaign manager and advised that the claim wasn’t true.

And after Dr. Bradley retained me in October, we never made that false claim again.

But after Dr. Bradley and I parted ways last month, he went back to his former campaign consultant.  And THEY resurrected the false claim and put it out.  Not me.  So let’s put that to rest.

Now, after publishing my post criticizing the false accusation and setting the record straight, Woodrow Johnston, one of Dr. Bradley’s new/old consultants wrote:

“Seems like you’re really splitting hairs on this one Chuck.”

No way, Jose.  And for those who weren’t there, weren’t involved and have no idea what they’re talking about, let’s go through it.

You see, I have particular knowledge of this situation, as I was late Assemblyman Dennis Hof’s campaign manager.  And I was fully informed and aware of the process followed to appoint his successor.

Dennis and Joe got along great together.  They worked well together.  They shared a similar conservative philosophy.  Dennis liked Joe.  Dennis respected Joe.  Of the 19 applicants, Joe Burdzinski was clearly the rightful heir to Dennis’ Assembly District 36 seat.

But that’s not how it went down.  Here’s what actually happened…

Dennis passed away three weeks before the 2018 general election…but won the race in a landslide anyway.  As such, someone needed to be appointed to fill the vacancy before the start of the 2019 legislative session in February.

Now, according to law, legislative vacancies are filled by appointment by the county commission.  However, as noted by Patrick Walker of 8NewsNow on December 4, 2018…

“Commissioners in Clark, Lincoln, and Nye counties are tasked with selecting a replacement because the seat covers parts of all three counties.”

But it was even more complicated than that.

The value of each county’s vote was weighted based on the percentage of the population in each county.  Here’s how FOX 5 KVVU-TV accurately explained the process on November 7, 2018…

“As deceased candidate Dennis Hof won the race for Nevada State Assembly District 36 on Tuesday, commissioners from Clark, Lincoln and Nye counties will select the next person to represent that district during the next several weeks.

“Under state law, the value of the votes from each county commission will be weighted to match the population distribution of each county within the assembly district as of the last U.S. census. In Assembly District 36, almost 64 percent of the population resides in Nye County, about 34 percent lives in Clark County, and about 3 percent resides in Lincoln County.”

So the reality was, even if Clark and Lincoln counties had teamed up to appoint, say, Candidate A, they would have been over-ridden by Nye County’s support for Candidate B.  Whoever Nye County picked…for better or worse…THAT was who was going to be appointed.

So the combined vote to appoint Hafen in early December 2018 was 16-1.  But they still had to have a final, official vote.  And here’s what happened…

The various county commissioners hopped on a conference call.  By law, the chairman of each county got to cast one vote each on behalf of their county and colleagues.

But again, it was just a formality.  Since Nye County controlled 64% of the vote, whoever Nye County Commission Chairman John Koenig voted for was going to get the appointment.  In reality, his vote was the only vote that mattered.

Now, a video of that meeting/conference call has been posted on Facebook by Dr. Bradley and some of his supporters in which Chairman Koenig supposedly said that then-Clark County Commission Chairman Steve Sisolak’s vote was the only one that counted.

That’s not what happened.  That claim has been taken completely out of context.

In case you haven’t seen the video, here’s what actually went down…

During the conference call, Clark County Commissioner Chris Giunchigliani, aka “Chris G,” made a motion to appoint Hafen.  Sisolak then seconded the motion.  To which Commissioner Koenig advised: “The NRS says the chairman will cast the vote.”

What Mr. Koenig was pointing out was that, by law, Sisolak, as Chairman of the Clark County Commission, was the only Clark County commissioner who was legally allowed to cast the vote on behalf of Clark County.

His vote, not the vote of any other Clark County commissioners, was the only vote that counted as far as Clark County was concerned in this final vote.

And at that point Sisolak cast Clark County’s vote in favor of Greg Hafen.

So again, while it’s true that Sisolak voted to appoint Hafen – along with 16 of his 17 commission colleagues and along with the other two commission chairmen – it is simply NOT TRUE that “Sisolak appointed Hafen.”

“I think it is people being deceitful, ignorant, unethical or simply doing the job of the establishment.”

Um, no.  The fact is he and his campaign are the ones being deceitful – and some of his supporters are simply ignorant of the process that was followed.

And conspiracy theories to the contrary, this has nothing whatsoever to do with “the establishment” – which I have no use for whatsoever.  This is simply me setting the record straight…hopefully once and for all.

To wrap this up, Norman McPeck, in response to my original post about Dr. Bradley’s false claim, wrote…

Well, here’s where I am…

I have no doubt that Dr. Bradley would be a far more dependable conservative vote than Assemblyman Hafen.

However, integrity matters.  And Dr. Bradley’s willingness to knowingly spread a demonstrably false accusation – combined with his refusal to admit it, apologize for it and delete the false video and social media posts – is a serious cause for concern.

So at this point, put me down as “undecided.”

“Whoever is careless with the truth in small matters cannot be trusted with important matters.” –  Albert Einstein