You would think that with $4.2 million in special interest booty in his campaign treasure chest that Nevada Sen. Dean Heller could afford to hire something a little better than a ham-handed Junior Varsity communications team.

But, hey, I got no problem with shooting fish-sticks in the freezer, so let me tell ya a story…and it’s got a great kicker at the end, so you’ll want to read the whole thing.

And before you go any further, be advised that – thanks to the CommSquad at Team Heller – this column includes what would be called “adult material.”  That warning aside, onward…

The protagonists in our story – oh, wait, I want to make sure Heller’s boys understand this so I better not use big words.

The GOOD GUYS in our story are Danny Tarkanian and Dennis Hof.  I work for both, so make of that what you will.  But be advised, these are my personal opinions, not anything from either candidate’s campaign.

Dennis and Danny met on the campaign trail at the Pahrump Harvest Festival a few weeks back.

In their personal lives, the pair are like Felix Unger and Oscar Madison – a real “Odd Couple.”  Danny’s a quiet family man who goes to church every Sunday.  Dennis is a gregarious – oops, sorry Team Heller, I mean “outgoing” – star of an award-winning HBO reality series about his seven LEGAL brothels.

And since this story is about Team Heller’s JV squad of spin doctors playing the ol’ “guilt by association” game, I’ll take this opportunity to point out that in his 2006 campaign for Congress, Heller accepted $4,200, as reported by the Associated Press, from a guy named Lance Gilman, owner of Lance’s World Famous Brothel in Storey County.

Oh, and back in 2001 when Heller’s mentor, Sen. Harry Reid, hopped up on his moral high horse, the Las Vegas Review-Journal reported that Reid’s “Nevada colleagues in Congress didn’t jump behind his call to outlaw rural prostitution,” and when asked, Rep. Heller “didn’t comment on the issue.”

So Team Heller’s recent salacious (sorry, boys, go look that one up) attacks against Mr. Hof and this legal Nevada industry – which, whether you agree with it morally or not, employs thousands of people and generates millions of dollars worth of tax revenue – are just another hypocritical “election conversion” due to the ongoing death spiral of Mr. Heller’s poll numbers thanks in large part to his failure to honor his campaign promise to repeal ObamaCare.

But I digress.  Back to our story…

Oh, which reminds me: My boy, CJ, competed in and won this year’s Beatty Days Root Beer Belching Contest… 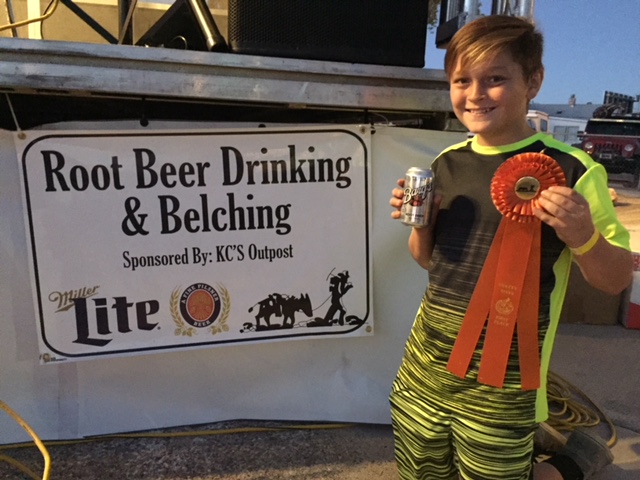 Makes a father proud!  But I digress again…

Anyway, at the Harvest Festival in Pahrump back in September, Dennis and Danny got to talking.  As Beatty is a big part of Dennis’ district, he bought a booth at the Beatty Days celebration for the entire weekend.  Danny intended to be at Beatty Days on Friday but needed to be in Carson City on Saturday for the big Nevada Day parade there.

So Dennis generously offered to share his booth with Danny and hand out his campaign literature on the days Danny wouldn’t be there.  That’s it.  They shared a booth.  At a rural town celebration.  Big whoop.

They flooded social media with “hack attacks” that because Danny shared a booth at a neighborhood festival with Dennis that meant Danny was tied by association to everything and anything to do with Dennis’ personal and business life.

And that’s exactly what Team Heller tried to do over Dennis and Danny sharing a booth at Beatty Days.  But if the positions of supporters are going to be tied to the candidate, well, two can play that game!

Let’s begin with Hayden Goldstein, who posted a photo at “Internship training” for #TeamDean back on September 6th… 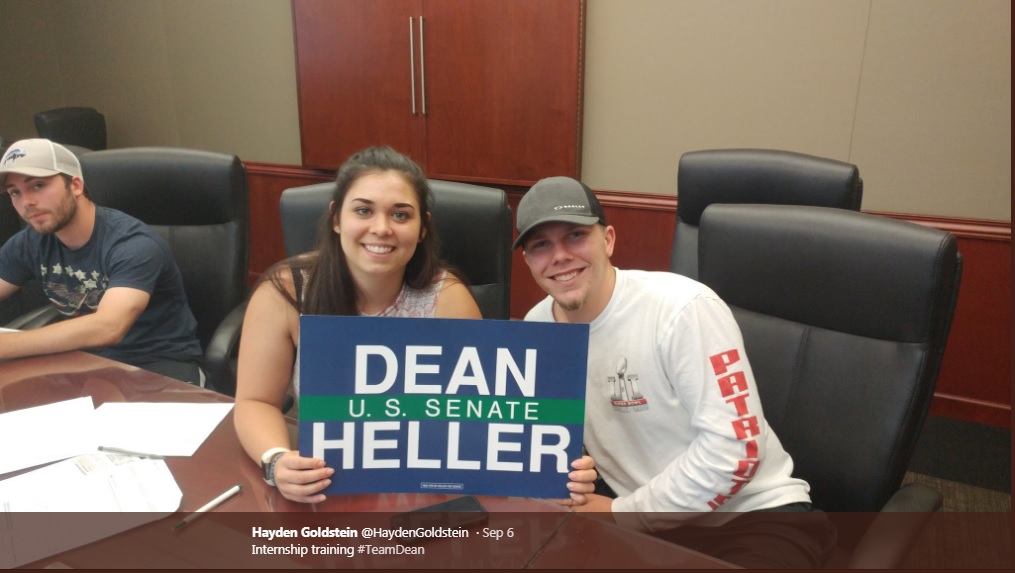 “Danny Tarkanian, who is challenging Sen. Dean Heller, campaigns with a pimp.”

Now, that would be the same Hayden Goldstein who re-tweeted (since deleted; thank goodness for screen shots!) this… 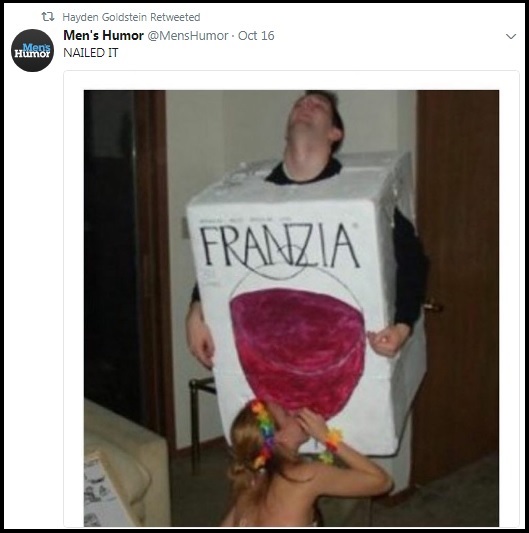 Dean Heller, who is being challenged by Danny Tarkanian, employs an intern who posted a picture on his Twitter account of a scantily-clad girl on her knees simulating (we think) a “Lewinski.”

Oh, and then there was this little photo-tweet of a woman from earlier this year which includes this hormone-laced Goldstein gold comment…

“Missing this hot ass VS model more and more every day.” 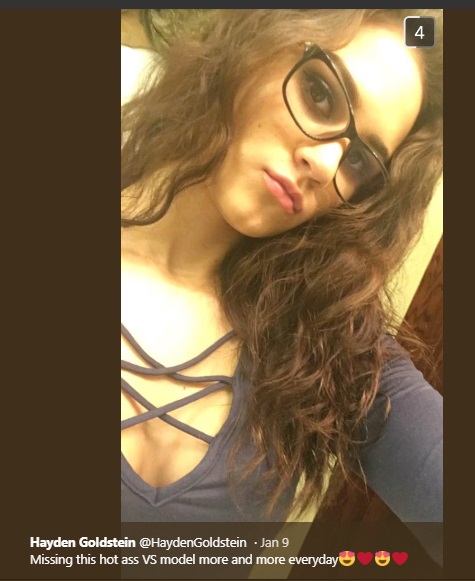 Is this sex-crazed guy still “associated” with your campaign, Dean?

Then there’s Jeremy Hughes – Heller’s former political director who is currently employed as a low-level spin doctor for Heller’s campaign consulting firm which specializes in electing RINOs – who jumped onto this guilt-by-association bandwagon.

Here’s the thing about Jeremy: He thinks beating a woman black-and-blue is funny.

But there’s another side to the champ…

“Mayweather has a long history of domestic violence,” Tony Manfred of Business Insider reminded us.  “The most recent incident, in which he hit his ex-girlfriend in front of two of their children at 5 a.m. in 2010, resulted in a 90-day prison sentence.”

Now, if we’re going to play the guilt-by-association game, this must mean that, since Heller is paying Hughes to work on his campaign, Heller must also support violence against women, right?

This isn’t just two guys simply sharing a booth at a festival here.  Dean Heller has HIRED this guy who thinks it’s a riot that a professional boxer beat the living tar out of the mother of his two children…IN FRONT OF THEM!

Let’s now move on to Evan Roth, a “Finance Associate at Heller for Senate”…

Even compared to Hughes, Evan is a bit unhinged.  Here’s what this cute little JV member of Heller’s CommSquad wrote in an email to the Tarkanian campaign…

Wow.  A taunt one might normally expect to hear on an elementary school playground.  $4.2 million sure don’t buy much these days!

In any event, you may not care for the LEGAL business Dennis is in, but to recklessly, falsely and knowingly accuse him of being a “child sex slave owner” is absolutely outrageous.

And since Roth works for Heller, then guilt-by-association means Heller should be named in the libel lawsuit, right?

Oh, but Little Evan wasn’t done.  Not by a longshot.

Now, bear in mind that ever since Tarkanian entered the GOP primary race against Heller, Heller has been panting after President Donald Trump like some lovesick schoolgirl.  You can find this #NeverTrumper now sucking up to the president, his family and his administration almost every day.

But Heller is obviously willing to demean himself thusly in the hope of currying POTUS’ favor and saving his seat in the swamp.  Yet here’s what Heller’s paid Finance Associate wrote in an email to Tarkanian on August 25, 2017…

“It is disappointing to see you become a lapdog of our President Cheeto.”

But according to Team Heller’s Law of Guilt-by-Association, that’s exactly how Dean Heller feels about the president he’s desperately trying to woo, right?

Little Evan followed that up with an email August 30 voicing his opposition to President Trump’s pardon of Sheriff Joe Arpaio.  But on this one, no guilt-by-association is needed.  Heller publicly opposed the pardon of this decorated, 40-year law enforcement officer, as well.

Then there was an email Roth sent on September 12, 2017 in which he described former Alaska Gov. Sarah Palin as “the dumbest craziest person with gross moles.”

By association, I guess such a childish personal attack is shared by Sen. Heller, right?

Then there’s Keith Schipper (“pronounced SKIPPER, like Gilligan’s buddy”), the captain of Heller’s JV CommSquad, who thought it was cute last week to poke fun in a tweet at the surfer necklace I wear in memory of a beloved deceased family member.

I wear it because I’m an unreconstituted “beach bum” even though “Charlie don’t surf.”  But Schipper didn’t know that.  Which demonstrates the danger of launching personal attacks against someone you don’t know.

It’s a rookie mistake.  Hopefully my “little buddy” will learn from the experience.

Oh, I’m just getting warmed up!

If I wanted to, I could bring up the association of Heller’s TOP campaign strategist who was involved with a certain U.S. senator who was involved in an extra-marital sex scandal – which included a cover-up and payoffs to witnesses – where the senator was caught playing Hide the Weenie with his best friend’s wife who also happened to be a campaign staffer.

Mike, do you really want us all to go there?

If so, you know me.  If you want to fight this campaign in the gutter, I’m more than happy to strip the varnish off this Pandora’s box and slug it out with you in the mud and the blood and the beer.

Heck, the mailers on this one literally write themselves.

Or maybe, just maybe, before this goes any further, we should call a truce on this guilt-by-association crap?  Maybe all would be better served – especially the voting public – if we just ceased hostilities on this front?

Maybe you should just direct your JV attack dogs to delete their childish tweets on this matter and I’ll delete this post on my blog and we can get back to discussing real issues – like how Dean helped Hillary Clinton win Nevada by being a Never Trumper, how he voted against repealing ObamaCare, and why he’s supporting continued taxpayer subsidies for windmills.

But, hey, if you want to continue with this “sex stuff,” I’ll just pop open that can of worms and let them crawl all over those guilt-by-association skeletons in your client’s closet.

Your move.  You know where to find me.

And in the immortal words Lt. Theo Kojak, “Ciao, baby.”