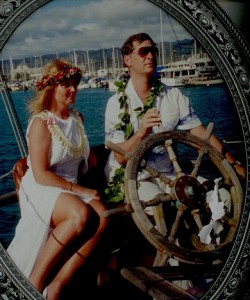 Today is the 20th anniversary of my wedding to my lovely wife, the former Gia Averno of Reisterstown, Maryland.

On this day in 1994 – the year Republicans took control of Congress! – we chartered an old sailing boat out of Honolulu, skippered by a hippie-looking fellow by the name of “Captain Howie” who, nevertheless, was a big Rush Limbaugh fan.  So we’d found the right guy.

The harbor where the boat was docked was the same harbor us old folks used to see every week when the S.S. Minnow left for a “three hour tour” before the “weather starting getting rough and the tiny ship was tossed.”

No such problem for us.  Perfect day sailing off the coast of Waikiki for the sunset service, with dolphins swimming alongside the boat, jumping in and out of the water.  WAY COOL!

The wedding march was played by my two young nephews on dueling tubas.  (Hard to roll a pipe organ down those narrow boat docks!)  My Uncle Lee – a Navy submariner who stayed in Hawaii after getting out of the service in 1969 – was my best man.  And my Aunt Bebe was Gia’s maid of honor.  They were the only family on hand to share that day with us.

Gia and I wrote our own wedding vows.  Mostly serious, but a few light-hearted.  I’m not sure which category the one I remember best falls into, but we both promised to never, ever vote for a liberal Democrat!  And yes, I have it on videotape.

For our wedding dinner, we went to our favorite restaurant in Honolulu, the Ol’ Spaghetti Factory – which was a major challenge since we were both decked out in all white attire.

And instead of spending a boatload of money on the wedding itself, we spent it island-hopping for our honeymoon; with one week in Maui and another on the Big Island.  As actor Phil Hartman used to say on the television show News Radio, “Good times, good times.”

And in celebration of this momentous occasion, I’m sharing today’s issue of Silver State Confidential with everyone, not just paid subscribers…and taking the afternoon off!