Gov. Sisolak Sat on a Wall… 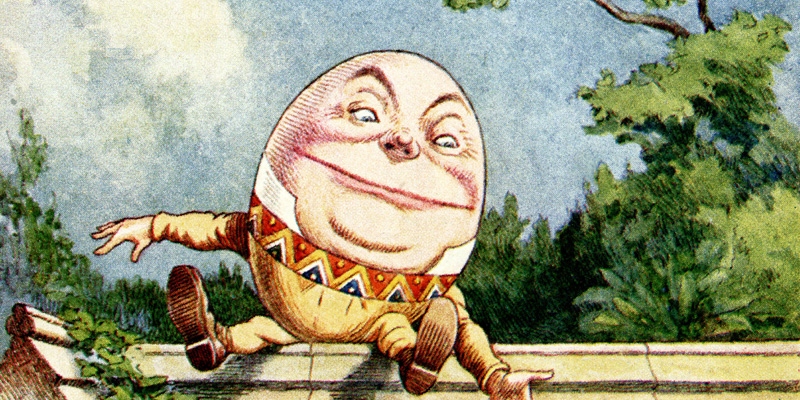 (Chuck Muth) – Article 19, Section 2 of the Nevada CONSTITUTION says that citizen initiative petitions calling for changes in state law “SHALL” be placed on the ballot by the Nevada Secretary of State for voters to vote up or down in the next election.

But Democrat Gov. Steve Sisolak doesn’t want just such an initiative – a massive tax hike qualified by the teachers’ union last year – to appear on the same ballot in 2022 as his re-election campaign.

So he went to Nevada Attorney General Aaron Ford, a fellow Democrat, and got his office to issue a Humpty Dumpty-like opinion that the word “shall” means whatever Gov. Sisolak chooses it to mean.

In an opinion released this past Wednesday, one of Ford’s underlings, Deputy Solicitor General Gregory Zunino, argued that a state law passed by Democrats in 2017 allows petitions to be withdrawn and the Secretary of State “has no discretion to disregard.’

“Although the word ‘shall’ is usually interpreted as mandatory, Zunino argues that the word ‘is not presumed to be mandatory if such an interpretation would undermine legislative intent.’”

“When I use a word,” Mr. Zunino may as well have said, “it means just what I choose it to mean – neither more nor less.”

This is the Alice in Wonderland state we now live in under the mismanagement of socialist-Democrats who control almost every major government body and office.

The one they don’t control?

As Mr. Sebelius goes on to note, Cegavske is independently elected and can choose to ignore the AG’s opinion.

State law cannot override the state Constitution.  And the word “shall” means “shall,” not whatever Sisolak, Ford and Zunino say it means – just as the wording of the Constitution says a 2/3 super-majority vote of the Legislature is required for legislative tax hikes.

Recall that Democrats tried in 2019 to pass a massive tax hike without the 2/3 vote.  Senate Republicans sued.  And the courts struck down the tax hike, essentially saying the plain meaning of words mean what they say, not whatever Democrats say they mean.

And by the way, the plain meaning of other words in the Constitution say government employees cannot also serve in the Legislature; that it’s a conflict of interest and violation of the separation of powers doctrine.

Which it clearly is.

And the Nevada Policy Research Institute (NPRI) has sued the state in an effort to have the clear meaning of those words upheld and enforced; which would disqualify about a dozen current legislators from continuing to serve while barring other government employees from running in the future.

And by the way, if the word “shall” does not mean “mandatory,” then Gov. Sisolak’s latest executive order demanding that every Nevadan “shall” wear a face diaper – even if they’ve been vaccinated for the COVID virus – must be interpreted as voluntary, right?

And – hey, kids! – when your parents say you “shall” do chores around the house, just tell them that Gov. Sisolak, AG Ford and Greg Zunino say their household rule is open to interpretation and you’re gonna ignore it.

That ought to make for a lively dinner discussion!

As I predicted a couple days ago, former Clark County Republican Party Chairman Dave “Sadsack” Sajdak’s rogue warriors won’t go gently into the night after their arch-nemesis, Jesse Law, was elected chairman at the continuation of the recessed July 20 meeting this week.

On Thursday, an unsigned email ostensibly from the “Clark County Republican Central Committee (CCRCC) Executive Board” claimed the gathering Wednesday night was an “unauthorized meeting including a fraudulent election.”

No it wasn’t. The meeting was properly called by a quorum of members of the party’s Central Committee.

The Executive Board statement declares that it “considers all actions at the unauthorized meeting” – including the election of more than a hundred new members – “to be null and void.”

The renegades went on to announce that the Executive Board was calling its own meeting for August 17th to continue the recessed July 20 meeting.  Except…

It has no such power.

As the professional parliamentarian flown in for Wednesday’s meeting explained, the organization’s bylaws say the E-Board only has power to make decisions “between” meetings of the full body.

Don’t take my word for it.  Get it straight from the horse’s mouth.  Click here

The only chance the rogue warriors now have is if they can convince a court that the words in the CCRCC’s bylaws mean whatever they say they mean, not what they actually mean.

So I guess these folks really ARE like Democrats after all!

* Why are the homeless exempted from Emperor von Sisolak’s latest mandatory mask order?  Are they immune from COVID?  Does COVID check to see if you’re homeless and, if you are, pass you by?  If so, then shouldn’t we forget both the vaccine and the masks and simply order everyone to become homeless?  Inquiring minds wanna know.

“This spring, (COVID) caseloads were not consistently higher in parts of the U.S. that had relaxed masking and social distancing measures – like Florida and Texas – than in regions that remained vigilant.” – David Leonhardt, New York Times, 7/30/21