It was 22 years ago this month.

A couple from California was visiting Las Vegas.  They walked near a union picket line in front of the then-Frontier Hotel.  Crazed picketers launched into a verbal assault on the couple.

When the woman took offense, she was punched in the face.  When her husband came to her defense, he had a beer mugged smashed across his skull.

At the time, Metro called the incident a “beating.” 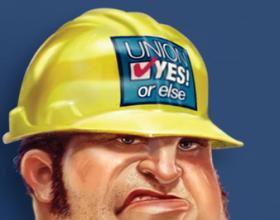 I remember that strike vividly, as I operated a delivery service on the Strip at the time and experienced similar taunting and intimidation tactics by union thugs – though, thankfully, absent the actual beating.

Some labor unions, to this day, conduct similar “protests” against Nevada businesses that won’t bow to their will and succumb to their demands.  Threats are made.  “Fightin’ words” are hurled at customers.  Property is damaged.  Business and traffic is ground to a halt as chanting, zombie-like picketers clog public sidewalks and streets.

All in the name of the union’s free speech “rights.”

But it is a generally-accepted concept in this country that one person’s rights end where another person’s begin.  And free speech can be constitutionally limited.  As we all know, you can’t yell “fire” in a crowded theater unless there’s actually a fire.

To that end, Assemblywoman Michele Fiore (R-Las Vegas) has introduced a bill (AB356) that, while preserving a union member’s free speech rights, imposes consequences on goofs and goons when they go too far in “mass picketing.”

In testimony introducing the bill, Fiore explained that AB356 “disallows a person from damaging, injuring, harming, threatening, or maliciously disrupting the lawful conduct of a business.”  It also “specifically does not allow for disrupting traffic or using the public right of way to interfere with a business.”

And since law enforcement traditionally uses the ol’ “catch and release” method for dealing with such  tactics – and refuses to curb “speech” designed “to intimidate, bully or threaten a customer of a business,” destroys property, and/or blocks traffic – AB356 would allow businesses to sue individuals who go too far in civil court.

While AB356 would clearly act as a curb to many of the more outrageous intimidation tactics of organized labor, it just as clearly would apply to other groups, as well – such as the “Occupy Wall Street” gadflies who did significant property damage during their “protests” a couple years ago.

Fiore’s “Goofs and Goons” deterrent bill is long overdue, much needed, and constitutionally permissible.  So let it be written; so let it be done.