First-Born Enters Teenhood with a BANG!

Seems like only yesterday, but it was 13 years ago today that my first daughter, Kristen, was born.

And what better way to usher in the “teen years” than a trip to Bob Irwin’s The Gun Store in Las Vegas to fire off some lead for the first time in her life!

Yes, I know some misguided people think it’s downright criminal to put a gun in the hands of a 13-year-old. To them I say:Bite me! 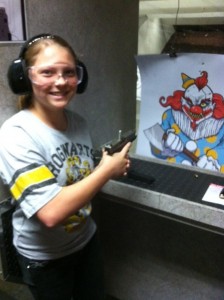 My baby shot a bit high at the demonic clown target on the first two shots with the Glock 19.

But after that it was one head shot after another – including one right between the eyes.

She then switched to a Ruger for the Zombie Woman.

(Must be the part-Sicilian blood from her mother’s side.)

And then the coup de grace; the gun liberals love to hate… 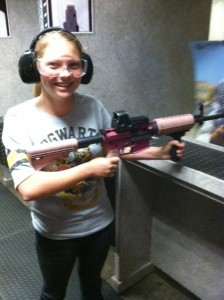 “Happiness is a warm gun!”

I don’t know why people are so scared of this gun. The one Kristen shouldered had a cute little pink stock and grip. Very lady-like.

But BLAM-O!! Did my baby do a number of that scarved terrorist hiding behind the sand dune! Every shot to the head; not one miss. Like a Navy SEAL. Now THAT’S gun control! What a rush.

After that we went to Texas Station for an old-fashioned, all-American breakfast of bacon and eggs. Helluva a way to celebrate the arrival of teen-hood, I tell ya.

But if it does, I have two words for him: