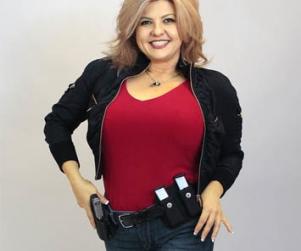 “If these young, hot little girls on campus have a firearm, I wonder how many men will want to assault them. The sexual assaults that are occurring would go down once these sexual predators get a bullet in their head.”

“It is beyond unfortunate that Michele Fiore’s response to sexual assault on campuses is a Rambo like mentality. … To claim that sexual assault is only happening to ‘young, hot little girls’ and that arming people can alleviate this problem is a false narrative.  As a mother of five daughters, and the only female leader in the Nevada legislature, I am offended.”

Oh, puh-lease.  As the father of a two young daughters myself, I’m even more offended that Ms. Kirkpatrick is offended!

And Fiore never said “only” young girls on campus are being sexually assaulted. THAT’S a “false narrative.”

On the other hand, it’s a fact beyond dispute that young women on campus are being sexually assaulted.  Indeed, back in 2007 a dirtbag named James Biella brutally raped UNR student Amanda Collins in the campus parking garage.  Collins was prohibited by law from carrying her lawful concealed weapon on campus that night and was completely defenseless.

Biella is now in jail.  He should have gotten a bullet in the head.  And yes, had Ms. Collins been armed the night she was raped, that could very well have “alleviated that problem,” Rambo-style or not.

Not our Michele.  Here’s the decidedly unapologetic statement she released as the left unleashed its fury on Fiore…

“That may not be the most eloquent way to phrase it; however, I stand wholeheartedly by that sentiment because I want every citizen, whether they’re on a college campus or not, to have the right to defend him or herself from sexual assault.

“So I ask, what’s your point? Are you opposed to the right to self defense or are you arguing that rape is the new normal of attending college?

“I stand with the people of Nevada and will always defend and protect our rights to self defense.”

No wonder so many liberals so despise her.

No wonder so many conservatives love her.