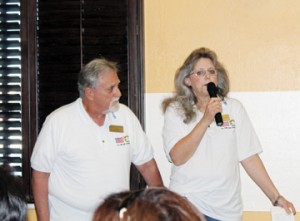 Cathie Lynn Gisi-Profant-Upshaw-Windham-Otts-Milar and her current husband, Art “Dizzy” Gisi, run what is misleadingly called the Grassroots Tea Party of Nevada.  They also appear to be politically bipolar.

In a Las Vegas Review-Journal story after the 2012 elections, Dizzy Gisi said that he and Gisi-Profant-Upshaw-Windham-Otts-Milar were “so conservative we make most tea partiers look like left-wing liberals.”

Yet in the same story Dizzy Gisi said he and Gisi-Profant-Upshaw-Windham-Otts-Milar supported giving driver’s licenses to persons in the U.S. illegally and “said tea party groups need to back moderate candidates” – which explains why the Dysfunctional Duo are supporting moderate Mark Hutchison, who voted for the bill giving driver’s licenses to illegals, in the lieutenant governor race.

Which brings us to Saturday…

As I’m sure you know, in his second and final debate with his opponent in the LG race, conservative Sue Lowden, Hutch’s nose grew a foot long after falsely declaring not once, not twice, but three times that he was not a personal injury lawyer and that his law firm didn’t hire personal injury lawyers.

On Saturday, Lowden put out an email saying that “never in my wildest dreams could I have imagined that he would so adamantly tell such a blatant fib about his own profession on camera!”

That elicited one of Gisi-Profant-Upshaw-Windham-Otts-Milar’s patented “y’all” emails in which she wrote that “Sue is at it again” and reprinted something Dizzy Gisi scribbled slamming Lowden, though simultaneously admitting that she was absolutely, positively correct.

“The Firm of Hutchison and Steffen employs 38 attorneys and takes cases in 21 different areas of law.  True enough, 1 of the areas listed is Personal Injury and there are 8 attorneys listed in that category.”

Anyway, in response to Dysfunctional Duo’s rant, conservative candidate for state assembly Victoria Seaman – a signer of the Taxpayer Protection Pledge – wrote the following back to Gisi-Profant-Upshaw-Windham-Otts-Milar…

“Cathie give it a rest! He (Hutchison) obviously has personal injury attorneys in his office.  You don’t make sense.”

To which Dizzy Gisi responded…

“When and if you get to the legislature I hope you have a majority on your side. If you don’t you’ll find no doesn’t accomplish anything. As far as credibility goes you don’t have much.  You didn’t support your opponent after the last election. Kind of like Sue. Sore losers.”

To which Seaman replied…

“Shows how little you know, I donated money and designed a fundraiser flyer for Kelly (Hurst). You and Cathie are making spectacles of yourselves. So what you’re saying is that we should compromise ourselves and values to go with the status quo. You both are shameless. Take me off your mailing list.”

Back to Dizzy Gisi and his tortured grammar…

“Not shameless realists . The county and country are moderate and repeating the same old Bs and expecting different results is the definition of insanity. Try something different for a change.”

At that point, Seaman had had enough of this dufus and sent the following email to her own list on Sunday…

“While we hardworking candidates are walking the districts and trying to win over Democrat seats, some people who claim to be Tea Party are tearing us down and asking us to be moderates.

“I have been bombarded for weeks with Cathie’s nasty emails and sat silent. I finally responded, only to be called names and told by Art that the county and country are moderate so we should all be moderate.  Which explains why they canvassed for Democrat Ruben Kihuen and heavily support moderates within our party. That same weekend they canvassed for Ruben Kihuen, I had a walk scheduled and asked them come. They did not walk with me once, even though I was without a primary.

“Art calls me a sore loser in his email and stated that I did not support my opponent when I lost my previous primary. On the contrary, I donated money to my opponent and helped many other candidates.

“Art also states that I need to be a ‘yes’ girl if I get elected, and that ‘no’ will not accomplish anything unless we have a majority.  This can explain why we are the minority since people in our party are dividing us and asking us to go with the status quo.

“I feel it is necessary to expose this so called local tea party for who they are. They are not conservatives, but rather those who go with the status quo.”