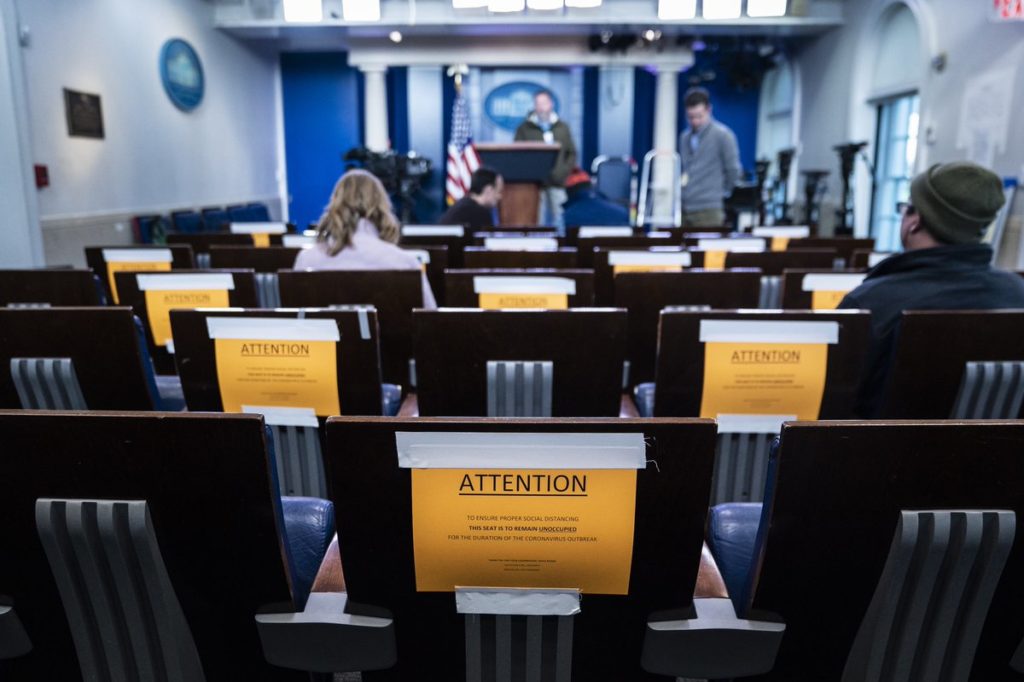 Las Vegas Review-Journal columnist Debra Saunders – who you may have seen asking questions during recent White House briefings on the Wu-Flu – notes that both the Washington Post and New York Times, charter members of the Fake News Media, no longer send its reporters to the daily briefings.

“How low the titans of journalism have slumped,” she wrote on Sunday.  “News outlets routinely send reporters into war zones and natural disasters with ugly death tolls. Yet somehow the White House is just too dangerous?”

“The White House,” Saunders continued, “has to be one of the safest places inside the beltway to work. Someone takes your temperature before you can get through the gate and again before briefings.”

She added that the WaPo and NYT “boycott” looks worse considering how loudly they belly-ached when the White House stopped regular daily briefings – which had become a clown show starring CNN’s Jim Acosta – a year ago.

Columnist Victor Davis Hansen observes that WaPo and the NYT still require paid subscriptions to their online publications, even for articles related to the coronavirus.

Under the circumstances, with the public in a panic due in large part of their own reporting, why don’t they “tear down this paywall”?

And here’s something else interesting to consider…

Saunders reports that the number of seats in the briefing room have been cut from 49 to 14 to allow for safe social distancing.  So why can’t the same be applied to, say, libraries and churches?  Or for that matter movies, concerts and sporting events?

New York Times columnist Thomas Friedman noted today that President Donald Trump, on January 22, in response to a question as to whether there were any worries about the China virus, said…

“No.  Not at all.  And we’re; we have it totally under control.  It’s one person coming in from China.  It’s going to be just fine.”

Friedman, a Trump-hater from Jump Street, is, of course, using that quote hoping to damage Trump’s re-election chances by “proving” he missed the coming threat and crisis.  But get this…

In an interview just the day before, here’s what Dr. Anthony Fauci – you know, the nation’s health expert – said…

“The president, his denial at the beginning, was deadly.”

Yet Pelosi herself, doing a publicity stunt in San Francisco’s Chinatown, surrounded by a large group of people and reporters rubbing shoulders, had this to say on February 24, a MONTH after the President’s statement…

“It’s exciting to be here, especially at this time, to be able to be unified with our community.  We want to be vigilant about what is out there in other places. We want to be careful about how we deal with it, but we do want to say to people ‘Come to Chinatown, here we are – we’re, again, careful, safe – and come join us.’”

If only there was a cure for the raging hypocrisy of those infected with Trump Derangement Syndrome!

Not All Social Contacts are Created Equal

While most retail stores in Nevada are shuttered thanks to the Sisolak Shutdown, grocery stores, designated “essential,” remain open.

Yet despite the governor’s declaration that “every social contact increases your risk of exposure,” Jeff German of the Las Vegas Review-Journal reported on Sunday that there “are no local health regulations in place for coronavirus-related inspections at Las Vegas grocery retailers.”

The RJ reported on visits to various grocery stores recently – Albertsons, Smiths, WinCo, Whole Foods, Costco and WalMart – and noted spotty, at best, use of masks, gloves and sanitizing protocols.

And while we’re on this subject: Why are city busses still allowed to operate in Las Vegas, especially since cleaning and sanitizing is only being done once a night?

Look, maybe we can’t reopen *all* businesses in Nevada just yet, but retail stores that follow proper safety protocols don’t pose any greater threat than grocery and convenience stores.

And the threat in rural Nevada is nowhere near the threat in Las Vegas and Reno (thanks in no small part to the infected Californians who continue to come here).

It’s time to loosen up the stranglehold in a measured, common sense way, with an appropriate balance between risk and benefit.  It’s time to start putting at least SOME people back to work to flatten the curve of our economic destruction.

* Today is my 61st birthday.  Was supposed to be celebrating tonight in the Carnival Panorama’s piano bar with family and friends.  Instead I’ll be sitting at home watching Netflix re-runs.  Thanks, China!

*  Sleepy Joe Biden – who is preparing to hide his own Easter eggs next weekend – actually said: “No American should have to wait a single minute so Donald Trump can put his signature on a physical (stimulus relief) check.”

This guy actually thinks the president is going to personally sign over 5 million checks per week?  What a ‘shroom.

* With his stroke-of-a-pen-rule-of-the-land declaration halting all evictions in Nevada, Gov. Steve Sisolak said renters would have to work with landlords to make up the rent down the road.

“This is simply ridiculous,” wrote Terry Ostlund in a a letter-to-the-editor published the Las Vegas Review-Journal on Saturday.  “If someone was being evicted for not paying rent, who would think that they would suddenly become more responsible renters in the future and make up the rent they already owed?”

Something else the governor obviously didn’t think about.

* WalMart, nationally, announced new safety measures this week that include limiting the number of customers in its stores, creating “one way streets” for many of its aisles and “checking the temperatures of all employees as they arrive for work.”

Great.  But, um, why can’t OTHER retail stores in Nevada – especially mom-and-pops – reopen if they follow similar social distancing and other safety protocols, especially in rural Nevada?

* In his column on Sunday, Rich Velotta argues that Las Vegas’ 115,000 empty hotel rooms shouldn’t be used to house the homeless during the coronavirus crisis.  He quotes business consultant Brendan Bussman as noting that “could damage a hotel’s brand” going forward.

Fair enough.  But what about this?  Why can’t the homeless be temporarily housed in the government universities’ empty, taxpayer-funded dorm rooms, hmm?

* For the last ten years Nevada has had a robust and highly successful online “virtual” charter school program that Democrats, leftists and especially the teachers union have been trying to destroy.  But today, they’re the ONLY schools still open.

We need more of them, not less.  Now more than ever.  The Legislature needs to reduce regulations and roadblocks to these tuition-free online charter schools.  Preferably in a soon-to-be-convened Special Session.

* The Sisolak Shutdown has resulted in Laughlin’s ONLY grocery store shutting down and permanently going out of business.  Dead as a doornail.  Maybe the media should start reporting more on those “deaths” with the same passion as direct coronavirus-related deaths?

* A son killed his father and shot his mother during an argument at a family gathering in Las Vegas on Saturday.  Metro homicide Lt. Ray Spencer noted that “with everybody being quarantined inside their house, it can be very stressful.”

So does this murder count as a COVID-19 related death?  How many more such tragedies are we going to have to witness before someone realizes the cure is worse than the disease?

“To all of our youth who are missing the start of their @LittleLeague seasons, hang in there! We will get you back out on the fields, and know that you will be playing baseball soon.  We will get through this together, and bats will be swinging before you know it. In the meantime, take care of mom and dad, and know that this will not be forever!” – President Donald Trump