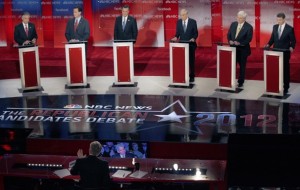 Sunday morning’s NBC debate was moderated by David Gregory, who did a much better job than ABC’s Stuffin’envelopes/Sawyer duo. Then again, that bar was high enough for a worm to crawl over.

Gregory wanted the GOP candidates to tell Americans how much pain they were going to cause if elected, what they would do to make fellow Republicans uncomfortable, what Americans will “have to learn to do with less of,” what the candidates would do to support gay rights, to tell everyone just how great labor unions are…and asked Rick Santorum if he was a socialist.

Gregory then went on to attack taxpayer champion Grover Norquist of Americans for Tax Reform by (a) mischaracterizing the Taxpayer Protection Pledge and (b) asking Romney who “knew more about the American economy,” Grover or Warren Buffett.

Good for Romney for not playing along and refusing to get drawn into answering such a stupid question.

Otherwise, the highlights of what was a much edgier debate than the snoozer last night included:

• Santorum landing a nice shot against Romney for quitting and not running for re-election as governor of Massachusetts
• Gingrich upbraiding Romney for his “non-politician” baloney
• Huntsman taking Romney to the woodshed for criticizing Huntsman for serving as the U.S. Ambassador to China under Obama; noting that his two sons in the Navy are also technically serving under Obama.
• Perry’s self-deprecating humor in remembering this time around the three cabinet departments he’d eliminate if elected.
• Perry reaffirming his belief that Obama is a socialist
• Perry voicing strong support for the right to work

Actually, I’d have to say Perry was the winner of this debate overall, even though he really didn’t get a chance to participate as much as the others. But he used his limited opportunities well and appears to be getting his groove back. But is it too little, too late?

We’ll see. It’s Tuesday in New Hampshire for the next round of voting. Then off to Nevada…

Oops. Um, uh, no. That’s not right. Nevada caved to New Hampshire and the RNC, and so the election will next move to South Carolina. And then Nevada…

Oops, no…that’s not right either.

Florida broke the rules and moved its primary up, and Nevada…well, Nevada just let them butt in line. So the election will then move to the Sunshine State before finally moving to the Silver State. But, hey, we’ll be first in the West!