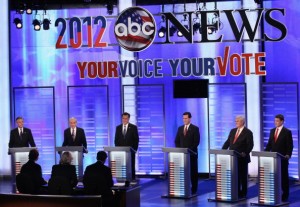 The real “epic fail” of this debate season is the GOP allowing liberal media figures to host and moderate REPUBLICAN debates in the first place. That said, let’s start with Saturday night’s ABC debate.

And was Diane Sawyer moderating a debate last night or hosting a political episode of This is Your Life? “What would you be doing tonight if you weren’t debating?” Really, Diane? Really?

The debates should be hosted by conservative organizations with conservative moderators….and if CNN, FOX, NBC, CBS, ABC and others want to broadcast them, fine. Give ‘em a feed. If not, screw ‘em.

And if you really want a question about contraception, why not bring back former Surgeon General Joycelyn Elders to ask about it? Free condoms for school children! Wahoo!!

In any event, it’s time for Republicans to get serious. And that means it’s time for Rick Santorum and Jon Huntsman to vamanos. Yes, Santorum. I don’t care that he won Iowa. He’s out of his league and his 15 minutes are up.

Rick Perry’s campaign isn’t dead yet, but it’s on life support. If Gingrich doesn’t reignite in South Carolina and Florida, Perry could be resurrected as the last “not-Romney” standing down the stretch. Yes, it’s a stretch…but conservatives who are not happy with the “Massachusetts moderate” are getting increasingly desperate.

Sorry, folks, but Ron Paul, rightly or wrongly, will never be embraced as an acceptable not-Romney by most GOP voters. He would, however, make a terrific Supreme Court justice. Or Fed chairman.

As for Romney, did he really say Saturday night that we have to protect entitlements…which are bankrupting the nation?

And finally, whether he’s electable or not is debatable; but what is not debatable is that Newt Gingrich is smart, knowledgeable, qualified, experienced, articulate…and would mop the floor with Barack Obama in a debate.

Bottom line: This ABC debate sucked. The candidates all appeared to be on Prozac and the moderators…well, they sucked. Then again, I’m sugar-coating it.