Dear NFL: If Players Take a Knee, We Take a Hike 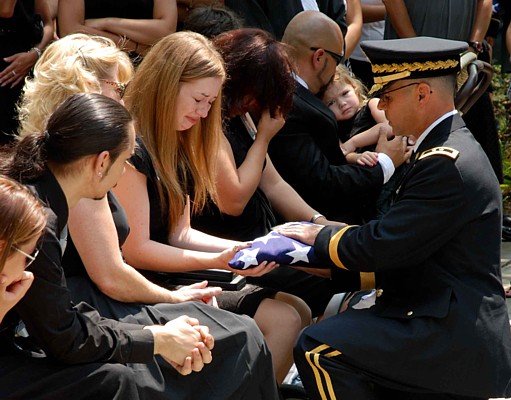 Sarah McKinney, widow of SPC Rafael A. Nieves, Jr. who was killed in action in Afghanistan, leaving behind two young children

A Category 5 storm of stupidity – Hurricane Kaepernick – is sweeping across the NFL.

Last year San Francisco 49er quarterback Colin Kaepernick decided to protest what he falsely claims to be rampant racism in America by refusing to stand during the National Anthem. His insulting act of disrespect then spread to a handful of other highly-paid ingrates.  Which resulted in a rather significant boycott of the NFL by fans in the stands.

After the season, Kaepernick walked away from his multi-million dollar contract with the 49ers and – get this – no team has hired him for the 2017 season.  Go figure.

In the meantime, other players have stupidly continued Kaepernick’s “take a knee” sideline shenanigans during the pre-season, including 49er strong safety Eric Reid.  And when asked recently what he hopes to accomplish by spitting in the eyes of NFL fans, Reid replied…

“Change.  The goal is to just create some change.”

Well, mission accomplished, bozo.  Because every time an NFL game pops up on my TV screen now I change the channel!

“I feel like I needed to regain control of the narrative and not let people say that what we’re doing is un-American, because it’s not,” Reid continued.  “It’s completely American.”

To be fair, that’s true.  Protesting in our country is as American as baseball, hot dogs, apple pie and Donald Trump.  But the problem isn’t that his silly protest is UN-American; it’s that it’s ANTI-American.

And the disrespect shown is absolutely a slap in the face to America’s law enforcement officers and members of the military – most of whom get paid a comparative pauper’s wage to risk their very lives and limbs defending our nation and fellow citizens.

To put this insulting temper-tantrum by these spoiled, pampered “athletes” into perspective, go to Google, click on “Images” and enter “flag draped coffin” in the search box.  Or consider the fact that 64 law enforcement officers were shot and killed in the line of duty last year, including five who were ambushed and gunned down by a sniper in Dallas.

THAT’S what the outraged backlash by Americans coast-to-coast is all about.

Making matters worse for the NFL is that coaches and team owners are standing by and letting these jerks get away with it.  49er coach Kyle Shanahan, when asked about Reid’s new protest, said flatly, “I’ve got no issue with it.”  And there’s been no public “You WILL stand” edict issued by any of the team owners that I know of.

By the way, for the constitutionally ignorant among us, there is no First Amendment right to speak without consequences from your private employer.  The First Amendment only protects you from GOVERNMENT reprisal.

If coaches, owners and the NFL refuse to put an end to this insulting clown act, the fans will.  There will be an even bigger boycott this season, which will cost the NFL billions in lost revenue.  You take a knee; we take a hike.