Dear Candidate: You are cordially invited to oppose tax hikes 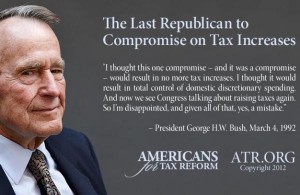 Sponsored by Grover Norquist of Americans for Tax Reform, the Taxpayer Protection Pledge has been signed by true taxpayer champions and fiscally conservative candidates all across the country for over 25 years.

The Left and the mainstream media (but I repeat myself) hate the Pledge because it hinders their ability to get more money to grow government.

Moderate Republicans hate to sign the Pledge because it means they would actually have to vote the way they campaigned.

These “Gumbies” say they need to be “flexible” – which means they want to be able to raise taxes, which is ALWAYS easier than cutting spending or setting spending priorities.

And they come up with all manner of B.S. excuses not to promise their voters IN WRITING that they won’t raise taxes.  So let’s take a look at some of them…

In reality, if you are a true fiscal conservative there is NO EXCUSE for not signing the Pledge.  There are ALWAYS options to raising taxes and fees, including reducing spending and shifting spending priorities.

Also, the Pledge DOES NOT stop an elected official from pursuing tax reform…as long as the tax reform doesn’t result in a net increase in tax revenue to the government.

For example, if there was a proposal to lower the sales tax on goods while imposing a new tax on some services that broadens the tax base but does not result in a net increase in tax revenue going to the government, that may or may not be a good policy idea but it would NOT be a violation of the Tax Pledge.  It just has to be revenue neutral.

So any candidate who says the Tax Pledge would stop them from voting for tax reform (hello, Becky Harris!), they are simply wrong.  The Pledge does no such thing.

Another issue that often comes up is this notion of raising “fees.”  The Tax Pledge does NOT prevent you from raising fees, but only if it’s a true USER fee and not a tax disguised as a fee.

A true user fee is a fee you can avoid by doing business elsewhere.  For example, if you want to raise the fee to use the picnic area in a government park for a birthday party, that’s not a violation of the Pledge because people can always hold their birthday party somewhere else.

However, a business licensing fee is not a user fee because you have no choice but to pay it to the government and can’t go anywhere else to get the license.  This “fee” is really just a tax by another name because there’s no way around it.

Then there’s the ever-popular “my word is my bond” excuse.

Try using that line the next time you try to get a loan to buy a house or a car.  Or for that matter, using your Visa or MasterCard at Wal-Mart or any other retail store.  Good luck telling the sales clerk that you won’t sign the charge slip because “your word is your bond.”

To paraphrase an old saying, in God we trust; all others have to sign on the dotted line.

Then there’s the absolutely worst excuse you can ever use: “But if I sign the Pledge, (insert special interest here) said they won’t give me money.”

Think about that one for a second.

If you want to sign the Pledge because you truly believe that raising taxes is the wrong public policy, yet you won’t sign it because if you do someone won’t give you money, what are you going to do when confronted by a major donor asking for your vote on a bad public policy bill once in office?

I mean, if you’re willing to sell out your principles even BEFORE getting elected, is there any doubt that you’ll sell them out after?

And lastly, the Pledge isn’t made to me or Grover Norquist.  The wording is quite simple and explicit.  Candidates who sign the Tax Pledge are making a campaign promise to the TAXPAYERS in your district.

PLEDGE IS A HISTORICAL WEATHER VANE

Candidates make a lot of campaign promises; often broken.  The only difference here is that you’re actually signing a document attesting to your commitment, not just paying lip service to it.

With the glaring exception of infamous Pledge-breaker Sen. Moderate Mike Roberson, candidates who have signed the Tax Pledge have consistently voted against tax hikes while in office.

On the other hand, of those who have consistently voted to raise taxes, none of them – again with the glaring exception of Sen. Roberson – have opted to sign the Tax Pledge.

Candidates who sign the Tax Pledge – again with the glaring exception of Sen. Roberson – can usually be depended upon to honor their campaign promises not to raise taxes.

Historically speaking, those who refuse to sign the Tax Pledge are the ones who break their campaign promises and vote for tax hikes.

Oh, and they usually get a lot of other issues wrong, as well!

And by the way, a vote to extend the “sunsets” is absolutely, positively a vote to increase taxes.

When it comes to lame excuses for not signing the Tax Pledge, I think I’ve pretty much heard ‘em all.  And if I haven’t, I’m sure Grover has.  For any candidate running as a fiscal conservative there is simply no argument or circumstance that Grover and I can’t counter.

Think you have a new one?  Give us a shot.  Kinda like “Stump the Bandleader.”

HOW TO TAKE THE PLEDGE

On the other hand, if you want the taxpayers of your district – whether they be Republicans, Democrats or anything in between – to know with near-metaphysical certainty that you won’t raise their taxes (by the way, Democrat voters don’t want their taxes raised any more than Republican voters do, though they’re often happy to raise somebody else’s taxes!), then please join Sen. Dean Heller, Rep. Mark Amodei, Rep. Joe Heck and almost every other elected Republican in Congress – along with thousands of elected state legislators all across the country – in signing the Taxpayer Protection Pledge.

Depending on the office you’re running for, the wording is slightly different…

If you’re a candidate running for Congress or U.S. Senate office, click here to download the Pledge

If you’re a candidate running for governor, mayor or any other state office, click here to download the Pledge

If you’re a candidate running for a legislative seat or any other local office, click here to download the Pledge

Then please fax your completed Pledge to both Americans for Tax Reform and Citizen Outreach, as both of our organizations publish a running list of candidates in Nevada who have signed the Pledge on our websites.

Or you can scan and email your signed Pledge directly to me at chuck@citizenoutreach.com and I will forward a copy to Grover and ATR.  Also, if you have any questions or concerns about signing the Pledge, feel free to email them to the same address.

If you’re a fiscal conservative candidate and will be in the Las Vegas area this Friday evening, please join us for our monthly First Friday Happy Hour and participate in a public Tax Pledge signing ceremony with a pair of official celebrity witnesses – conservative talk-show host Alan Stock of KDWN and Nevada Tax Pledge signer Assemblyman John Hambrick!

We’ll do a photo-op of you and your signed Pledge with Alan and Assemblyman Hambrick, plus I’ll issue a formal press release for each Pledge signer that you can use on your campaign website or blog.

And, hey, if you’ve already signed the Pledge, please join us and “renew your vows”!

That’s this Friday, April 4th from 5-7 pm at Stoney’s Rockin’ Country in the Town Square Mall on the south end of the Strip.  Even if you can’t stay for the full event, stop by, sign your Pledge and be on your way.  And don’t worry about bringing a copy; we’ll have plenty of blank copies on-hand.

P.S. My 55th birthday is this Saturday, April 5th, and signing the Pledge around 5:55 pm would be the PERFECT early birthday present!

By the way, Citizen Outreach PAC will be endorsing candidates in this year’s elections, including the primaries; however…

Citizen Outreach PAC will NOT endorse any candidate who has not signed the Taxpayer Protection Pledge.  We’ve been burned by too many candidates who promise they won’t raise taxes on the campaign trail (hello, Gov. Sandoval!) but then flip-flop and break their word once in office.

“Branding is important. Coca-Cola spends a lot of time and quality-control branding Coca-Cola. Everybody knows what’s in Coca-Cola. And so you can buy a bottle of Coke, take it home and you don’t have to ask what’s in it or read the ingredients or ask your friends about. You just take it home and drink it.

“But what if you get two-thirds of the way through your bottle of Coke and you look in and there’s a rat head in what’s left in your Coke bottle?

“You do not just say to yourself, ‘You know, I’m wondering whether I’m going to finish all of the rest of this particular bottle of Coke this evening.’  Instead you begin to wonder whether you’ll ever buy Coke again in the future and go on local TV and show the cool rat head. And then Coca-Cola has a very large problem worldwide. It damages the brand.

“Republican elected officials who vote for tax increases are rat heads in the Coke bottle. They damage the GOP brand for everybody else.”