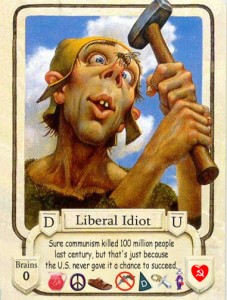 A new voice is rising from the bowels of Nevada liberalism, and not surprisingly it’s coming from an associate “political science” professor from a government-subsidized college campus. What are the odds?

The liberal professor is David Damore of UNLV, who also now advertises himself as a nonresident fellow at the liberal Brookings Institute. Here’s his published bio:

“After receiving his PhD. in Political Science from the University of California, Davis in 2000, Dr. Damore joined the faculty at UNLV in August of 2000. He was promoted to Associate Professor after the 2005-06 academic year. His primary research interests are the study of campaigns and elections in the United States. At UNLV he teaches lower and upper division courses in American politics and graduate and undergraduate courses in research methods. Dr. Damore also regularly comments on Nevada governmental and political issues for local, national, and international media outlets.”

In other words, the guy is a pure academic with no real-world political experience whatsoever, and yet feels qualified to “comment” authoritatively to media outlets on things he knows absolutely nothing about except for what he’s learned in a book.

Damore, you may recall, came up with a laughable “scorecard” of the 2011 Nevada Legislature a few weeks back in which he cherry-picked less than a dozen votes that he claims show whether or not a southern Nevada legislator supported the interests of southern Nevadans. Here, this will give you an idea of just how biased, liberal and ridiculous Damore’s ratings are:

And of those six, da one dat has Damore da most worried is Roberson.

In a Las Vegas SUN guest op/ed on Sunday, Damore mimicks Sen. Mike Schneider in dissing Roberson as a “rookie” legislator who “put himself on the sidelines during the session’s crucial endgame negotiations” supposedly “because of his decision to sign an anti-tax petition at the behest of a political activist.”

I think we all know who the political activist is. Damore & Company ought to just start referring to me as “He Who Must Not Be Named” and be done with it.

That said, I can assure you that Sen. Roberson didn’t sign the Taxpayer Protection Pledge at my “behest.” He signed it all on his own because he’s a true, principled conservative who believes that small, limited government is what’s best for the state of Nevada….just as our Founders believed about the country.

Now, as for the claim that Roberson’s position on taxes sidelined him in the closing budget negotiations, it’s clear Damore wasn’t there and knows not what he speaks.

Roberson’s opposition to extending the $600 million tax hike/sunset extension DROVE the final debate. It drove the debate in the opposite direction of Damore and the Left, but Roberson was anything but sidelined. In fact, I’d argue he was actually the field general for the majority of the GOP Senate team at the end.

In his effort to cut the legs out from under Roberson – another unmistakable sign of just how much the Left fears this unapologetic conservative leader – Damore also wrote:

“The prospect that Roberson, who is trying to elbow his way into his party’s leadership, could be a key player in the 2013 session is troubling for Southern Nevada. After all, in the prior cycle he raised significantly more campaign cash in the 775 area code than from his Henderson constituents. Given his performance in 2011, it would not be surprising to see northern interests double-down on their favorite southern son. The sad part for Roberson and his ilk is that they miss the irony of how their small government, anti-tax rhetoric is actually implemented in Nevada.”

1.) Sen. Roberson isn’t trying to “elbow his way into his party’s leadership.” He’s already there. He’s the Senate GOP’s Campaign Chairman for 2012.

4.) Although I haven’t looked at his campaign finance reports, it wouldn’t surprise me if the majority of Sen. Roberson’s campaign cash came from the 775 area code since that’s where Carson City is located and, therefore, where most of the associations and lobbyists live and work. The same accusation probably applies to a majority of southern Nevada Democrats, as well.

5.) If those “northern interests” do “double-down” on Roberson, it will be because of his rise to greater influence and leadership positions. So what’s that say about Damore’s claim that Roberson’s strong, principled anti-tax hike position has “sidelined” him?

6.) “Roberson and his ilk.” That’s likely to include a lot of you conservative parents who have kids going to UNLV. Remember that when it’s time for you to choose an associate political science “professor.” Know full well that he and his “ilk” will be trying to brainwash your children into believing that da more gummint da better.

And just in case there is any remaining doubt as to whether or not David Damore is a card-carry, bleeding heart, tax-and-spend, tie-dyed liberal-socialist, consider this quote from The Political Eye in Monday’s Las Vegas Review-Journal:

“(The 2012 presidential race) will come down to which side is better able to frame the debate, with the Democrats arguing that it is the politics of the GOP that got us into this mess and that the Republicans in Congress are not interested in investing in job creation because it will hurt their electoral prospects. The Republicans will reflexively respond that the answer is less regulation and more tax breaks and a bunch of nonsense about a balanced budget amendment.”

First, it doesn’t take an associate professor of political science to make such a simplistic “frame the debate” assessment of the 2012 race. I think my 11-year-old could have come up with something quite similar.

Secondly, the answer to job creation IS less regulation and lower taxes. Duh. But then again, why would we expect someone whose entire life has been lived within the comfort and protection of taxpayer-funded classroom walls to know that?

And lastly, with an economy trillions of dollars in debt, how clueless do you have to be to refer to the notion of a citizen-approved constitutional amendment limiting the federal government to spending only the amount of money it takes in as “nonsense”?

But the biggest question is why newspapers continue to quote political science professors who know nothing about politics as if they know anything about politics? As I’ve just exposed here, it’s certainly not because they’re objective and unbiased.

When Democrat political consultant Dan Hart or Republican political consultant Ryan Erwin venture an opinion or comment on politics in Nevada, you know it’s based on extensive, real-world experiences. When ivory-tower academics like David Damore pontificate on such matters, it’s more likely based on what they learned from Schoolhouse Rock on “How a Bill Becomes a Law.”

In the end, David Damore is a perfect reflection of the old saying that those who can, do; those who can’t, teach. Not that there’s anything wrong with teachers. I’m one myself. But as Clint Eastwood so famously put it, a man’s got to know his limitations. And associate profs such as Damore ought to just stick with book learnin’ and leave the real world to the real players.

When we have a burning desire to sit through a lecture on “The Etiology of Interest Mobilization in Direct Democracy Elections,” we’ll attend your conference presentation, OK Dave?