I really, really, really hate writing about race issues.  But it’s an important, often inflammatory, topic that too often gets swept under the rug because so many of us are so uncomfortable talking about it openly and honestly with or to members of other races.

So into the breach I return.

Last Sunday I wrote a column taking issue with Nevada Senate Minority Leader Aaron Ford(D-Las Vegas) over his contention that young black men are justified in running away from the cops even if they haven’t done anything wrong because of the way some cops have treated some young black men in the past.

Sen. Ford responded, expanding on his views, which, in turn, deserve further consideration and comment.

The senator asserts that I misunderstood his point; that his commentary was more about the relationship between young black men and police officers than about blacks and whites, especially because at least two of the six police officers indicted in Baltimore over Freddie Gray’s death are black.

But although the senator’s intent may have been to focus on the issue of police relations rather than race relations, you cannot ignore the fact that protesters and rioters in Baltimore, not to mention most of the news media, continue to make this a race issue. 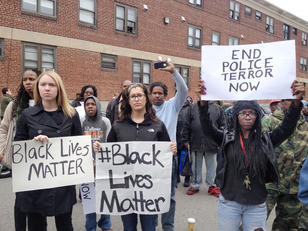 For example, all the “Black Lives Matter” protest signs.

Still, Sen. Ford is absolutely correct in saying that another important and integral part of the unrest lies in a fear of law enforcement among a significant portion of the inner city black community, as evidenced by the “End Police Terror Now” signs that popped up next to the “Black Lives Matter” signs in Baltimore.

But if we shift the focus away from the race of the police officers in this matter and focus on policing policies, that nevertheless brings up the equally uncomfortable topic of young black men who commit crimes, often very violent crimes, and those who don’t.

Which inevitably raises the explosive topic of “profiling,” which Sen. Ford raised in his initial response and elaborated on in his follow-up response.

My point is that all people, to some extent, profile.  Many inner city blacks profile – or call it stereotype, if you like – all police officers, regardless of color.  As do many suburban whites of young black men when walking down the street.

“There is nothing more painful to me at this stage in my life than to walk down the street and hear footsteps and start thinking about robbery. Then look around and see somebody white and feel relieved.”

And while this makes for a good academic debate topic, the reality in the three recent high-profile dust-ups between police officers and young black men – Freddie Gray in Baltimore,Michael Brown in Ferguson and Eric Garner in New York – involved young black men who were criminals.

One of the few legitimate roles of government is public safety.  Police officers are hired to protect the public from people who break the community’s laws, especially those who do bodily harm to innocent people.

And like it or not, the way a young black man on the street looks, walks and talks will often set off early warning signals that maybe, just maybe, he might be less than an ideal citizen – what many criticize as “profiling.”

And yes, “pants on the ground” often triggers such a reaction.

Again, all people profile for all kinds of reasons based on all kinds of factors – especially police officers who are in a very difficult and dangerous job.  And while an initial police “profile” of someone will often turn out not to be accurate, it often is.

And that’s not just me, the white guy, suggesting that.

Black comedian Chris Rock – in a very funny routine on this very serious subject titled“How Not to Get Your Ass Kicked by the Police” way back in 2007 – said pretty much the exact same thing.

Among his common-sense tips to avoid police brutality: Obey the law, don’t run from the police, and be polite and respectful towards the police officer.

Gray, Brown and Garner did not follow these “Rock’s Rules.”

That said, I just don’t agree with Sen. Ford that “profiling” itself is inherently evil.

If a police officer is found to be pulling over EVERY young black man he sees on the street just because he’s black, yeah, that’s a problem.

In the movie “Liar, Liar,” a repeat offender called Jim Carey’s character, a lawyer, to advise that he’d been arrested again and asked for his legal advice.  Carey’s simple response…

THAT’S the root of profiling in most cases, not racism.

Sen. Ford writes that he does not “condone profiling of any type.”  Under certain circumstances and within certain limitations, I do.

For example, I don’t think it’s unreasonable for law enforcement to profile 20-something Muslim men when it comes to combating terrorism.

So why should law enforcement give them the same amount of scrutiny as, say, those two dirtballs who tried to kill people in Texas last week just for drawing cartoons of the Prophet?

But back to the issue at hand.  Sen. Ford concluded his response with the following…

“The real lesson here is that there must be a renewal and restoration of trust between cops and the communities they patrol. Maybe then, instead of running AWAY from cops, young black men will cordially run TOWARD them with trust and appreciation. One way – one sad but necessary way – for this to occur is for bad actors to be actually prosecuted for, and found guilty of, heinous acts like those that occurred in #Ferguson, #Charleston, #Baltimore, and countless other cities across America. Maybe then cops and the citizens they’re sworn to protect can establish a mutual level of trust and respect that will result in running not being viewed as a sign of culpability and a license to kill.”

Sorry, I simply don’t buy the notion that all black people inherently distrust all cops, including – if not especially – in inner city black communities.

The fact is the police in these high-crime neighborhoods are all that stand between the vast majority of law-abiding citizens just trying to live their lives unmolested and the bad guys.

In this regard, I think that Dr. Ben Carson, who is both black and spent years living in Baltimore as a neurosurgeon, put it best last week in warning about the non-stop media criticism and protests that lump all the good police officers into the same barrel with the few bad apples…

“What we don’t want to happen (is) we beat up on the police all the time and they get to the point where they second guess themselves and they become timid.  And then it endangers them and it also endangers the people they are supposed to be protecting.  So that ends up being a worse situation.”

I’d add that if young black men – such as Gray, Brown and Garner – would stop breaking the law they’d have no reason to run away from the cops, even if they never run cordially run toward them.

And Sen. Ford’s insinuation to the contrary, bad police officers ARE being prosecuted and found guilty of misconduct.

In fact, just 30 miles south of Baltimore – just outside Washington, DC – a cop was found guiltyof misconduct for striking a foul-mouthed belligerent teen while in custody the very same week as the Freddie Gray incident.

And just because the facts often don’t bear out the claim of misconduct by a police officer – such as in the Michael Brown incident in Ferguson – that doesn’t mean police officers have an unrestricted “license to kill” anyone who runs from them in the black community.

That is an insulting and incendiary indictment against the vast majority of professional police officers throughout the country who every day strap on a gun and pin on badge not knowing if they’ll come home to their loved ones that evening.

Gunned down last week while on duty.

By a young black man who was a “serial criminal.”

Where were the street protests and outrage expressed by the black community over that?