Collective Bargains Should be Ratified Collectively 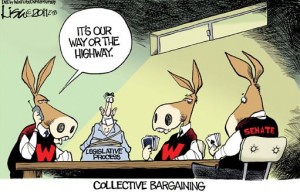 Although the issue of collective bargaining for government workers has been white hot this year in states such as Wisconsin and Ohio, Nevada’s Legislature opted to do not much more than tinker around the edges on a couple of matters relating to health and retirement benefits for future state employees.

“The process of collective bargaining, as usually understood, cannot be transplanted into the public service,” FDR wrote in 1937. “A strike of public employees manifests nothing less than an intent on their part to prevent or obstruct the operations of Government.”

However, even government employee unions without collective bargaining privileges often find ways to disrupt the operations of government other than full-blown strikes. It usually manifests itself today in the form of political extortion backed-up by war chests of campaign cash forcefully extracted from worker paychecks without their permission.

The inevitable result of this protection racket is public employee compensation deals that inevitably exceed the ability of taxpayers to fund.

Indeed, the city of North Las Vegas is right now in jeopardy of being taken over by the state, and recently announced plans to close its two recreation centers thanks to intransigence by its public employee unions which have refused to make sufficient pay concessions in the middle of Nevada’s ongoing devastating recession.

Collective bargaining for public employee unions at all levels of government should be terminated with extreme prejudice. But short of that, a more modest reform to help protect taxpayer interests should be implemented ASAP.

Once negotiators of a collective bargaining agreement for public employees reach an agreement, that agreement is sent to the members of the union for a vote on whether or not to accept it. At the very least, the same courtesy should be extended to the taxpayers who will have to pay for that agreement.