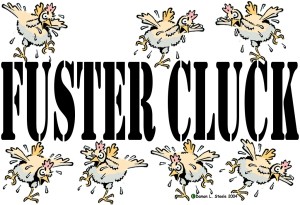 It may be the eve of peace on earth and goodwill toward men, but that’s not stopping the Clark County Republican Party from blowing itself up from within.

In a meeting yesterday, Friday December 23, called by Dave Gibbs and attended by Gibbs, Woody Stroupe, Tim WIlliams Jr and me, Dave Gibbs, with the aggressive insistence of Tim WIlliams Jr, declared he is ordering a change in the caucus design to a single two-hour session for all precinct meetings to occur at the same time for all precincts. He stated the number of sites would be increased from the 29 now contracted to 45 or more sites. He would not listen to any discussion, but made it an irrevocable order not subject to review. Here are the facts regarding this.

1. The minimum number of volunteers required to be recruited and trained would be not less than 1305. We have about 600 after five months of recruiting, which is the target number required to staff 29 sites. Gibbs stated this did not matter. He said repeatedly that “We will find a way”. When queried how that would work, he said one trained person could conduct and monitor two or three meetings at the same time using untrained persons to conduct the other meetings. This breaks our entire site and support structure and destroys our security measures. It violates the assurances given to over 1000 CCRP members over the last several months.

2. Gibbs stated that Cory Drumright told him that multiple campaigns were planning to sue the party to get a court order to force this. Through indirect inquiries, I found no campaign that would support this. When told this, Gibbs then stated he was concerned it might happen at some unspecified later time to invalidate the results. He could not present any evidence or rational explanation to support this and refused to do so. When told that no campaign would directly or indirectly do this for fear of the negative consequences, he ignored the statement.

3. Gibbs stated that Drumright and Dave Gallagher at the state party said the state would not provide any funds to pay the insurance costs. We currently have covered the insurance costs for our present plan and obtained the current sites. We do not have the funds to cover any increase beyond two sites. Gibbs would not address this, but said “We will find way.”

4. This increases our logistics production needs by 50% or more. It is questionable if we could pay for this if time permits to meet the need. Again, Gibb’s response is “We will find a way”.

5. This mirrors the moves made by Cory Drumright and Tim Williams to render the caucus process totally vulnerable to the high-jackings by a rouge group of some candidate’s followers such as occurred in at least two sites in 2008 due to a lack of trained staff. Gibb’s response to this concern was “That won’t happen.” When asked how he knew this, he just repeated his statement.

6. Gibbs stated he had questions from “the press” about people missing their time slots. I asked him if he meant the liberal press or Elizabeth Crum. He did not answer the question. He then stated he had received angry phone calls from the Jewish community about having it on a Saturday but he did not offer to address that either. He was ony able to site two protesting names, one of which is actually signed up, trained and part of the caucus team, a fact he apparently did not know then.

7. When told the Review Journal had published a large article this week that included a statement from the state party that the counties would set their own schedules and that published Clark’s planned schedule, both Gibbs and Williams seemed surprised. Gibbs tried to deny it at first, then Williams stated it did not matter because “We have changed other things in the press before.”

8. I have received word from someone that she “had it from a generally reliable source and highly placed person in the party” that a group supporting a particular candidate is organizing to take over some part of the precinct meetings. This actually happened in 2008. He responded that “there won’t be any consequences” to the caucuses. He and Williams both stated they had run their sites in 2008 without any problems. Neither would believe that anything untoward had occurred anywhere. They insisted that everything ran smoothly and consistently in 2008, so there was no reason to be concerned about having the planned structure or trained volunteers.

9. In a meeting with WIlliams about two weeks ago, Williams stated he thought our process was “illegal” and that anyone should be able to be run a caucus meeting without training or authorization. He seemed very upset and reluctant to hear the process as designed is compliant with the NRS, state party guidelines and CCRP standing rules. He declared that he, as political director, is in charge.

10. When I requested from Gibbs the time to “run the numbers” to see what could be accomplished, Gibbs stated that would make no difference and that his order stands anyway.

11. When Gibbs stated that if I did not agree to his order, he stated he would have to appoint a replacement for me. I responded by telling him to go ahead. I told him I will not compromise the integrity of the process nor place it at great risk, nor support any attempt to do so. I stated this was a matter of integrity and I would not violate that. He then said I have two choices: agree with him or resign. I told him I would not be a party to any manner of corruption or seriously increased risk of corruption.

12. Gibbs and Williams continued to aggressively push until I declared the meeting ended and left.

I meant what I said. I will not be a part of any attempt to corrupt or increase the risk of corruption of the process and its structure, nor will I ever participate in breaking faith with all those who have attended the presentations or stepped up to volunteer in good faith, having told them the mistakes and problems of the past have been carefully addressed. If Gibbs persists in this, he will have to make good his threat to replace me with someone else. He ordered me to inform him on Monday, December 26, if I have decided to go along or not. I assure you, it will be “not”.

Yesterday, Woody Stroupe, Tim Williams, and I had a meeting with Steve Esh concerning the caucus. At that meeting, I told him that we need to change the caucus schedule to a single session throughout the county. This decision was the result of numerous issues that I believe have the potential of causing problems for the county party. Two of those reasons are:

1. Some of the campaigns have raised concerns about the results being skewed due to people not arriving at the right time and, hence, not being able to vote.

2. The bad press that would come as a result of someone being on TV or being quoted in the paper because they were “disenfranchised” by not being able to vote.

Since my main focus needs to be on the CCRP, I took these concerns very seriously.

However, the final “straw” that led me to make this decision was that the county elections office has revised precincts as part of the redistricting and just released the new precinct lists. A significant number of people no longer have the same precinct number they had before. That has the potential to cause confusion on caucus day, since people may not find their old precinct number on the list. What complicates this more is that the county will not be sending out new voter registration cards until after the caucus. That means that a lot of people will likely show up at the caucus with old cards looking for old precinct numbers. If we have multiple start times, with old and new precinct numbers, I believe this creates a potential for too many people to go to the wrong place or show at the wrong time – too many variables. The easiest way to make this work with this new situation is to have one start time. If someone shows at the wrong place, there will be time for them to get to the correct place in time to participate without having the added variable of being there at the correct time.

Woody, Tim, and I are all in full agreement that this is the best way to make sure we have the least amount of confusion for the caucus and presented that to Steve at the meeting. Steve was unreceptive to the idea, and said that he would refuse to be a part of it. I asked him to look at the data but let me know by Monday. Today he sent out an email to “undisclosed-recipients” telling them of the situation as he saw it and that he would not be a part of it. So, I regretfully accept his resignation as the Caucus Chair.

I have spoken with the other key members of the caucus team, and they are all still on board with working to make sure we have a successful caucus. As we work through this transition, please note that the CCRP officers are involved and will work to make sure we keep the planning on track. I will ask Steve to provide the caucus team with the list of volunteers and the materials he currently has. Mr. Jerry Littman, who has been a leading part of the caucus team, has agreed to help coordinate this transition process. The excellent work Mr. Esh has done to date has created a solid process. There needs to be no change to the process he has set up, only to the number of sites and the schedule of the day. The rest should stay in place as it is. Therefore, all those who have attended the training don’t need to change anything they have been trained to do.

I want to emphasize that this decision was mine and mine alone. Despite what Mr. Esh states, I was not pressured, ordered, or coerced by anyone to make this change, nor am I working with any campaign to hijack the caucus or corrupt the results. Those thoughts are strictly in his mind. I am saddened to see that he felt it necessary to take the issue public in this manner.

This caucus isn’t about Steve Esh or Dave Gibbs. It is about the Republican Party, the CCRP, and, most important, the voters of Clark County. We will get through this transition and proceed with planning a caucus that will be successful and will make us all proud to be Clark County Republicans.

Richard Engel, a member of the Clark County Republican Party Executive Board, this afternoon invoked a little-used provision in the party’s bylaws to call an emergency meeting on New Year’s Eve to address today’s eruption that threatens to throw the GOP February 4 presidential caucus into total chaos.

Not sure if Mr. Engel has the five other votes he needs to force this emergency meeting, or if his email below – which just went out a short time ago – is intended to recruit the six members required to call a special meeting, even over the objections of the party Chairman.

Pursuant to section 7.4 of the CCRP Bylaws, I, Richard Engel, as a voting member of the CCRP Executrive Board do hereby call for a special meeting of the CCRP Eboard, for the purpose of adopting a special order pursuant to Chapter 2 Section 1.6 of the CCRP Standing Rules, to be held on Saturday December 31 at 10:00AM.