Bring Me the Head of Michael McDonald 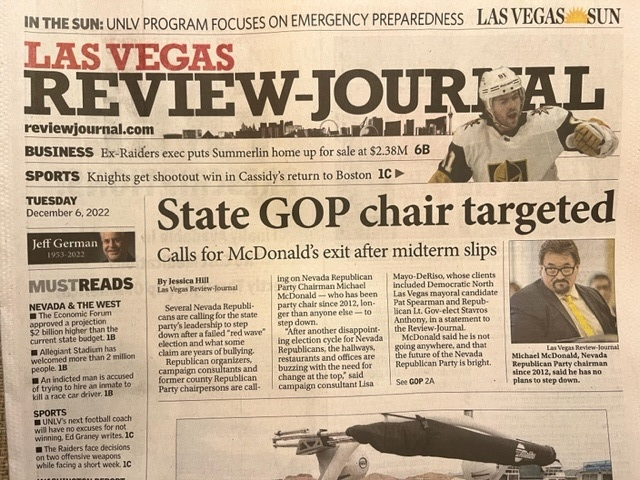 (Chuck Muth) – Some 25 years ago I listened to Rush Limbaugh for the first time.  My immediate reaction was: “Hey, somebody’s saying exactly what I’ve been thinking.  I’m not alone!”

While certainly not comparing myself to the great El Rushbo, apparently my last Muth’s Truths calling for Nevada Republican Party Michael McDonald to resign had a similar effect.

Turns out I’m not the only one thinking this way.

But in a front-page story in this morning’s Las Vegas Review-Journal, Jessica Hill writes that McDonald is digging in his heels and refusing to leave.

“McDonald said he is not going anywhere,” Hill reported, “and that the future of the Nevada Republican Party is bright.”

I’m not a doctor, but I believe the medical term for this is “clinical delusion.”

In any event, and to be fair, not everybody is on the “Bring Me the Head of Michael McDonald” bandwagon.

“I agree w/ NVGOP chairman @McDonaldNV that under his brilliant leadership #Nevada is the ONLY state in the nation that FLIPPED a Blue state governor Steve Sisolak (D-NV) into a red Republican governorship, when #LasVegas Clark County sheriff JOE LOMBARDO (R-NV) won.”

His ridiculous argument is like if the Houston Texans’ football coach, Lovie Smith, said the future of his team was “bright” because they beat the Jacksonville Jaguars back in early October even though they haven’t won any of their other 11 games this year.

Secondly, Lombardo won DESPITE the failures of the Nevada GOP, not because of them.  He won’t say it.  I will.

In addition, McDonald’s executive director, who has no choice but to defend the performance of her boss, told Hill that the Nevada GOP…

“…had about 60 events per week during the midterm campaign, between phone banking, door knocking and different events with committees. In the midterms, Republican turnout exceeded Democrats’ by 3 percent.”

First, GOP turnout is almost always higher than Democrat turnout in non-presidential election cycles, even without a “red wave.”

Secondly, if the party actually executed such successful phone-banking and door-knocking, why did it get crushed with so many losses – including the U.S. Senate race and three U.S. House races?

Either it didn’t do what it claims to have done, or it did it badly, or what it did was the wrong thing to do. Either way, the failure rests with the party chairman, not the party’s staff and volunteers.

In wrapping up, let me give you all a word of caution…

Last year, after writing that I thought Sam Brown would be a stronger general election candidate for the U.S. Senate than Adam Laxalt, Donald Trump’s hatchet man, Ric Grenell, came after me; accusing me of being “disloyal” to the former president who had already endorsed Laxalt.

And the McDonald camp is already using the same nonsensical tactic to try to defend their embattled party boss.

Political consultant Rory McShane – who, I believe, lost the races of GOP candidates Michele Fiore, Jim Marchant and Sam Peters and has done paid contract work for the Nevada Republican Party (not disclosed in the story) – told Hill that…

“Michael McDonald is one of the best state chairman in the country…and I hope he doesn’t spend one minute of energy on these anti-Trumpers.”

You see…if you think the Nevada Republican Party has been a failure over the last four election cycles…and think it’s time for a change in leadership…you’re an “anti-Trumper.”

Just because some Nevada Republicans think for themselves and disagree with Trump on an endorsement in their home state does NOT make them “anti-Trumpers.”  Period.

But this shameful and absurd attack on Nevada Republicans who dare to say “the emperor has no clothes” has worked in the past.  Laxalt beat Brown in the GOP…and went on to lose the general election.

I guess we’ll have to wait and see if this tactic will work again in saving McDonald’s bacon.

For information on how to join the Inner Circle, click here.

For information on how to join Citizen Outreach’s Reagan Legacy Council, Steering Committee, or President’s Advisory Board, click here.

“Chuck Muth is too classy to say it, so I’ll say it: Michael McDonald is loser, was a loser, and always will be a loser. @ChuckMuth is right on target here! The @NVGOP needs to rid themselves of this loser asap… or guess what? We’ll continue to lose.” – @LiberalsLeaving