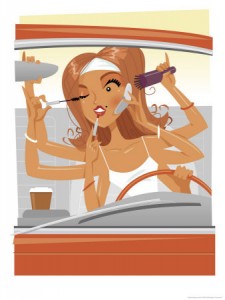 In an eye-opening and disturbing interview published in today’s Las Vegas Sun, Cellphone Commissar Shirley Breeden laid bare the underlying and dangerous tenets of nanny-state liberalism and “camel’s nose” legislation. The Democrat state senator from Las Vegas is the architect of the feel-good bill that went into effect on October 1 which bans the use of (some) electronic devices while driving.

Questioned about the need for the bill, since “distracted driving” was already against the law, Breeden seems to suggest the law was needed because law enforcement officers weren’t doing their jobs sufficiently well in enforcing the distracted driving rules. She says maybe specifically targeting the use of cell phones in a new law “will help” force cops to clamp down.

As if cops don’t have more important “crimes” to worry about. Wonderful.

When told that studies “have indicated that using a hands-free phone isn’t much, if any, safer than using a handheld phone,” Breeden “didn’t dispute the studies.” So in other words, she authored a solution that doesn’t even fix the alleged problem.

In addition, Breeden maintains that even using a hands-free device is dangerous because “if you’re in a deep conversation you’re not paying attention at all.” Which indicates that she’ll probably come back in the next session with an updated bill that not only will ban the use of hands-free cell phones, but “deep conversations” with passengers inside the vehicle.

So if just holding a cell phone in your hand is dangerous and a violation of Breeden’s Law, even if you’re not talking or texting on it, why not also ban driving while, say, drinking a cup of coffee or bottle of soda? “Are you distracted?” while driving and drinking a beverage, Breeden asks. “Yes,” she says, answering her own question. Therefore, “law enforcement needs to be looking for those people as well.”

Wonderful. Making criminals out of people driving and drinking a Coke. Where does it end?

But probably the most offensive aspect of Sen. Breeden’s offensive against cell phones is the elitism inherent in at least part of her argument. When asked if she, herself, uses a cell-phone while driving, Breeden responded:

“My phone is programmed into my car. I always have (used hands-free), but I can really say I’m not on it a lot. When it rings, I can push the button on my steering wheel.”

But what about the vast majority of us who can’t afford a brand new $25,000+ car or SUV that allows us to “push the button on (our) steering wheel”? This is a classic example of a well-off nanny-state liberal do-gooder foisting her personal beliefs on what everyone else should be doing whether they can afford it or not….all because this state senator apparently has difficulty walking and chewing gum at the same time.