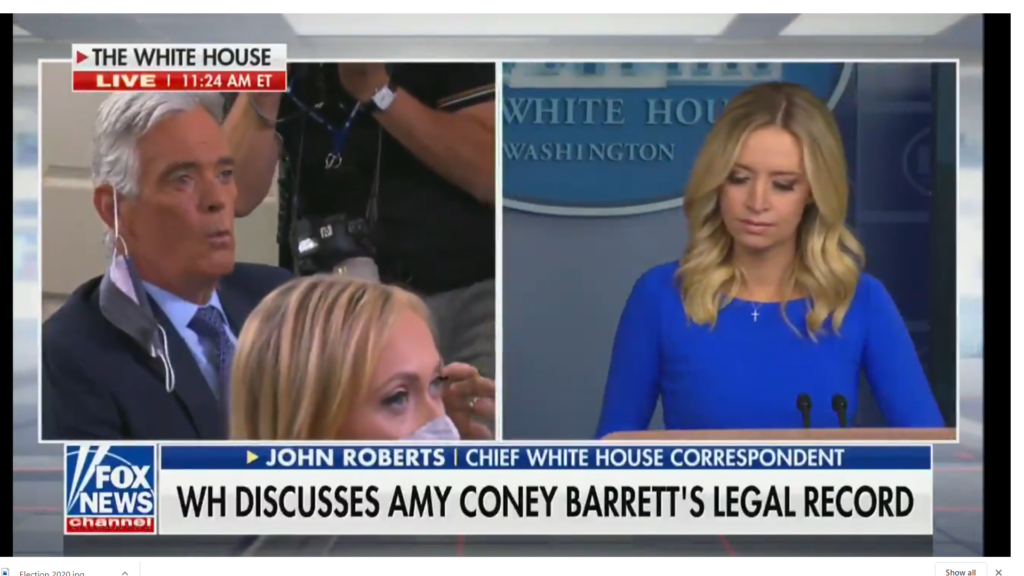 Here’s how he got the ball rolling…

“I’d like to ask you for a definitive and declarative statement without ambiguity or deflection.  As the person who speaks for the President, does the President denounce white supremacism and groups that espouse it in all their forms?”

McEnany responded that the President did just that THREE times during Tuesday night’s debate, and again at a media interview yesterday.

“He has condemned white supremacy more than any president in modern history,” McEnany concluded.

Not good enough for the shameless, though wonderfully coifed, Roberts.

“Just to clear it up this morning, can you, naming it, make a declarative statement that the President denounces it,” Roberts persisted.

“I just did,” McEnany replied.

But the insufferable Roberts wasn’t about to take “yes” for an answer; countering that all she did was “read a bunch of quotes from the past.”

It’s not good enough to have denounced white supremacy over and over and over again in “the past”?  President Trump now must somehow, for some reason, do it EVERY DAY?

This, apparently, is FOX News’ new definition of “fair and balanced.”

Roberts then had an angry, full-blown, on-camera meltdown following the exchange…

“For all of you on Twitter who are hammering me for asking that question, I don’t care! Because it’s a question that needs to be asked. … So stop deflecting.  Stop blaming the media.  I’m tired of it!”

Up yours, John.  The question has been asked and answered ad nauseum, you pinhead.

In fact, as McEnany pointed out after the Roberts temper tantrum, Roberts’ wife – Kyra Phillips over at ABC News – tweeted the following just the day before…

That’s right.  Roberts’ OWN WIFE reported that Donald Trump “denounced” – and the all-caps version of the word in the tweet was hers, not mine – “white supremacists” just 21 hours before he threw his hissy fit.

I expect this kind of disgraceful “fake news” behavior from CNN and MSNBC.  I’d come to expect better from FOX.

But it’s painfully obvious that it, too, is now big gulping the swamp’s Kool-Aid.

Been hearing a lot over the past couple of months about the conservative One America News (OAN) network.  Roberts’ childish street theater performance today finally pushed me over the edge.

I signed up for OAN this morning.

OAN has a FREE trial offer running right now that extends through the end of the year.  All you have to provide is your email address for immediate online access.  The network is also available via some cable and satellite services.

If you want to continue your subscription into 2021, the monthly fee – with no contract or long-term obligation – is just $4.99/month.  Cancel anytime.

And THAT, by the way, is the beauty and genius behind America’s competitive, free-market system.

If only we had the same options for public education!